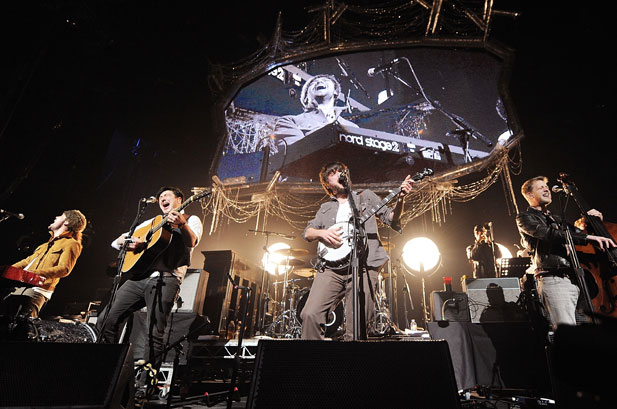 Mumford and Sons, Cardiff Motor Point Arena.
The mumbling conversations of eager, enthusiastic fans were silenced.  The rumbles of each member of the audience’s applaud and their high pitched screams and cheers took their place.  Mumford and Sons were about to begin, and the anticipated night ahead could now fulfil its prophecy.
Leaving no time for the audience to catch their breath, Mumford and Sons burst onto the stage, beginning with their newest single ‘I Will Wait.’  The energy that Marcus Mumford created with the incredible lyrics and his beautifully intoxicating voice is something that, in my opinion, could only be completely understood when heard live.  The four breathtakingly talented men, played a passionate set of old and new songs, from Babel, their newest album, and Sigh No More, their first album released in 2009, which portrayed not only their dedication for their profession, but their consistency in their music, and their hard-working ethics.
During their performance, Marcus Mumford produced pitch perfect vocals, whilst flawlessly playing various instruments, like the acoustic guitar, mandolin and drums.  Winston Marshall provided incredible harmonies, as well as playing the acoustic guitar and banjo immaculately throughout the night…  Ben Lovett played mostly keyboard instruments, which complemented the set beautifully.  Finally, Ted Dwane played a variety of instruments throughout the night, such as string bass, guitar, as well as backing vocals, giving each song the ‘western folk’ feel that Mumford and Sons are known for.   Each song in the set was finished and immaculate, but thanks to the string instruments used and Marcus Mumford’s naturally rugged voice, they still maintained the rough, folk-like feel that everyone loves.
They performed a range of upbeat, country-like songs, as well as slower, more meaningful songs.  Personally, the highlight of the evening for me; was their emotional performance of ‘Timshel.’  Each member of the band; stood in a line, with their hands behind their backs, facing the audience.  All four members sang the lyrics ‘you are not alone in this.’  Everyone in the audience was silent, staring up to them in awe.  The majority of the song was performed softly and full of emotion, inspiring to me, and I’m sure many other members of the audience.
Their incredible performance seemed to put a smile on everybody’s face, so as their set began to draw to a close, I think everyone felt slightly deflated.  However, Mumford and Sons brought it back during their final song, ‘The Cave.’  After only about three seconds into the song, the audience came back to life, and sang each word back to the band.  The upbeat and lively song was a perfect way to end a perfect night.  The band accepted a powerful applaud for the final time, and walked off the stage.  The lights turned on, and each person I saw leaving the arena, was smiling uncontrollably.  After seeing Mumford and Sons, any doubts that they couldn’t perform as well live have completely vanished, and they have proven to be an extremely talented, unique band that deserve to be in everyone’s top 10 playlist! 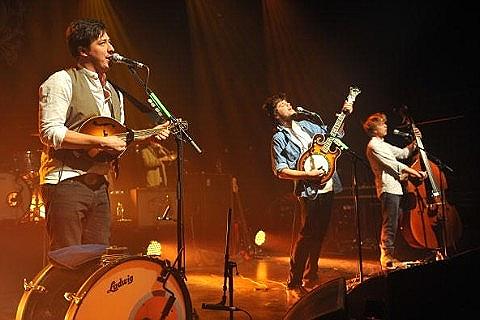 Review of Mumford and Sons Live!

On the night of the 13th December, it was cold but that didn’t seem to bother the masses of fans who were queuing to see Mumford and Sons. As you got into the Motorpoint Arena in Cardiff a wave of excitement hit you. The atmosphere was incredible. Behind the flags that were hung up on stage rows and rows of light bulbs could be seen and as you looked up above the crowd lights were hung, not yet lit but it seemed to get the crowd more excited.

After a little bit of waiting the first support act appeared on stage, ‘The Post War Years’. Their electronic beats got the crowd excited and moving. Many of the people were dancing and enjoying the ecstatic indie sound soaked in a deep love of forward-thinking electronic. The four piece brought smiles to the faces of almost everyone in the packed room.

The second support act ‘Dawes’, who are an American rock band from Los Angeles, composed of brothers Taylor and Griffin Goldsmith, along with Wylie Gelber and Tay Strathairn, were more lively and energetic than the previous band. Dawes’ sound was more similar to Mumford’s and the crowd interacted more with them. Their set consisted of lively songs but also two slow songs which were near the end of the set. Having never heard of them before, Dawes are now definitely a band I would listen too. As Dawes exited the stage a big red flag was dropped in front of the stage and screams echoed around the room.

After nearly three hours of waiting the moment had arrived, everyone could finally get what we were waiting for. The excitement was building as shadows danced behind the flag, as the flag was dropped a silence washed over the room, only to be shattered a second later as cheers of elation were passed around the audience.Marcus Mumford, Ben Lovett, “Country” Winston Marshall, and Ted Dwane were standing before us, and started to play the breath taking music that would stay with us the rest of the evening.

Mumford and Sons were joined on stage by a three piece brass arrangement, who accompanied the band beautifully throughout the night. The band played songs from both their new album ‘Babel’ and their first release ‘Sigh No More’. One song that really stood out was ‘Timshel’ from the album ‘Sigh No More’, where Marcus, Ted, Ben and Winston all put their instruments aside and stood at the front of the stage and acoustically sang. The sound was so pure, as they sung the words ‘And you are not alone in this, as brothers we will stand and we’ll hold your hand’, many hearts were touched.

I think it is safe to say as people left the arena after Mumford had finished their two encore pieces that no one left disappointed. Everyone that I saw left with a smile on their face, and a happy heart as they had just heard the inspiring lyrics and sound that is Mumford and Sons. 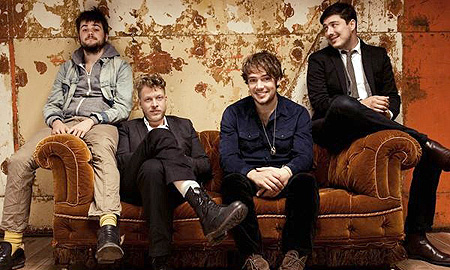 Mumford and Sons ‘The Tour of Two Halves’

The folk-rock band made their way to The Cardiff Motorpoint Arena on the 13th of December as one of their 16 UK dates for their sell out tour ‘The Tour Of Two Halves’.
The night begun with ‘Piff The Magic Dragon’ which was a very unique stand up act that had the crowd in howls of laughter with his peculiar sense of humour. Next up was the band of four from London, ‘Post War Years’ who wowed the crowd with exclusive tracks from their new EP. Following was Californian band ‘Dawes’ who also privileged the crowd with sounds from their brand new un-released album.
Eventually, the extreme madness started, as the iconic logo appeared on the oversized curtain right in front of our eyes across the stage. As the Bass of their latest single ‘Babel’ started echoing throughout the CIA the crowd went into uproar. However, due to the absence of the band, each and every audience member was waiting in suspense and finally, the curtain dropped as the song proceeded, allowing the audience to witness the delights of frontman Marcus Mumford, Ben Lovett, Winston Marshall and Ted Dwayne.
The night progressed with a mix of their debut album ‘Sigh No More’ and most recent album ‘Babel’. Including the sorts of ‘Holland Road’, ‘I Will Wait’, ‘Little Lion Man’ and ‘Below My Feet’, just to name a few. This was clearly to the audience’s delight as almost every person had their hands in the air while singing along to the meaningful, well-thought out lyrics, establishing the rather breath-taking atmosphere. Furthermore, the emotions of Marcus throughout the whole performance proved his passion for his music and lyrics, touching each audience member with his deep feelings.

The show ended with a rendition of their hit number 1 single ‘The Cave’, leaving the crowd muttering the words of ‘perfection’ and ‘world class’.