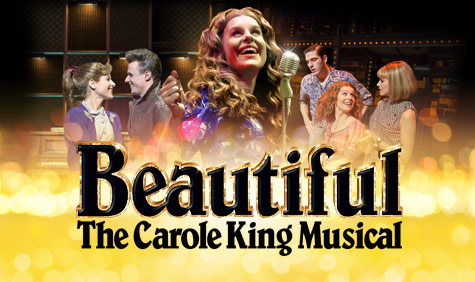 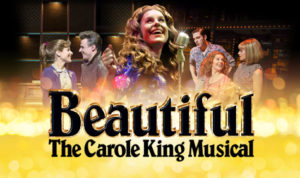 If like me, you know a little about music, and the history of the pop song, then you can think again. People often deride modern music for being manufactured, but even way back in the late 50’s and early 60’s, the charts to an extent were the creation of just a few song writing powerhouses. The likes of Lieber Stoller, Dozier Holland, Lennon & McCartney and Goffin King were all part of the fabric that made the early days of pop what they are today. And it’s the latter partnership of Goffin King that forms the basis of Beautiful, currently at Wales Millennium Centre till 4th November.

As the website explains further; BEAUTIFUL tells the inspiring true story of King’s remarkable rise to stardom, from being part of a hit songwriting team with her husband Gerry Goffin, to her relationship with fellow writers and best friends Cynthia Weil and Barry Mann, to becoming one of the most successful solo acts in popular music history. Along the way, she wrote the soundtrack to a generation, with countless classics such as You Make Me Feel Like a Natural Woman, Take Good Care of my Baby, You’ve Got a Friend, So Far Away, It Might As Well Rain Until September, Up on the Roof, and Locomotion.

There were countless moments for me to go “oh, she wrote that”, plus there was the time during the interval watching people sing some of the songs to try and explain the song – always entertaining. For anyone wanting to become a song writer, to watch this is certainly an education that no college or book can give you. To see some of the back story behind some of pop’s greatest hits was always going to be a massive bonus for me being such a music geek.

The performance of Bronté Barbé as Carole is quite amazing. You can close your eyes and you’d think it was the real deal. To capture the essence of someone is not easy, but somehow you have the vulnerability and the depth of character – together with a voice that provides the full package that is Carole King.

Kane Oliver Parry as Gerry Goffin shows the weaknesses that Goffin had, but also his song writing and creative processes. Amy Ellen Richardson as Cynthia Weil, and Matthew Gonsalves as Barry Mann, show also how the competitive the 60s were in terms of song writing. But out of that creativity, came friendship – and two very genuine performances from both.

It’s a well-paced production. There aren’t any times you’d be sat wishing for the next part. Musicals can sometimes suffer from being a little bit long, but at just around 2 hours 30 with an interval, that can’t be said of Beautiful.

Three things we also learnt;
1 The Locomotion was sung by Carole King’s nanny
2 Neil Sedaka was her boyfriend in high school (thus his song Oh Carol is about her)
3 She wrote The Reason for Celine Dion in 1998

It’s not too late to have one fine day seeing Beautiful : The Carole King Musical, at Wales Millennium Centre till 4th November 2017, and then touring around the UK.