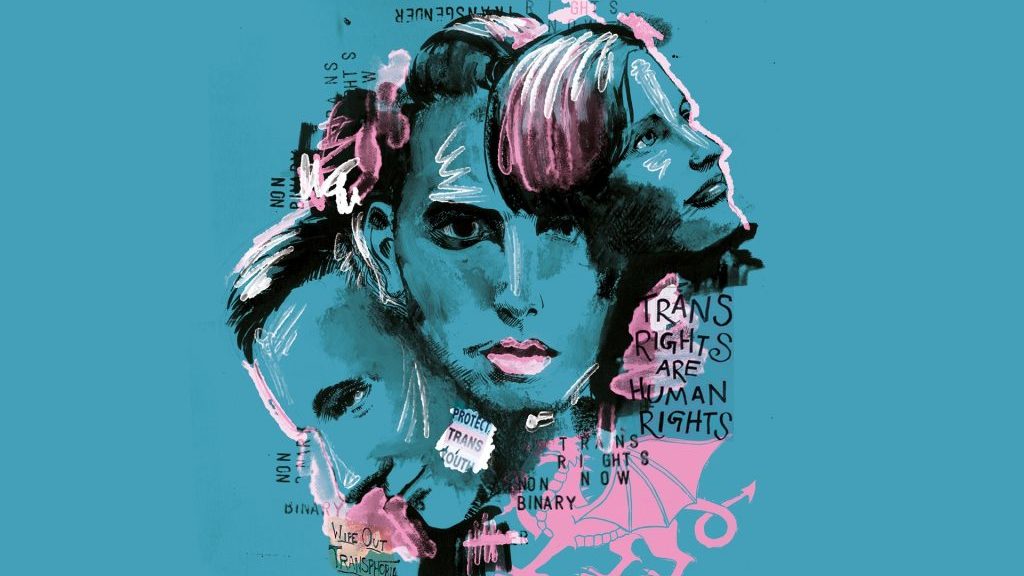 Humanequin by Kelly Jones is a groundbreaking collection of three stories from young transgender people in South Wales. It is raw in its monologue format and informative in its direct approach.

The stories come straight from real life and that reality is enhanced by having three transgender actors on stage. The fact that Humanequin is the first transgender play, with an all transgender cast performed in Wales, makes it truly groundbreaking. And the production is stronger for it.

The thing with this production is, it isn’t necessarily about the theatrical quality, that I am reviewing here. It is much more about what we as an audience take away from it. This is about telling and normalising the stories of transgender for the people of Cardiff and wider society. So to start without mentioning that would be a disservice.

The direction of this production from Jain Boon could be stronger. There is some nice blocking and movement in this piece. And moments that are strong. But overall, it lacks the intensity necessary for a piece like this.

Sammy Woodward stands out as the actor with the most emotional range and they really feel in the moment with their character. Emily Joh Miller grows into her performance whilst Harry Bryant keeps a steady pace throughout. The three work quite well together, but there is that lack of intensity and chemistry between the three.

Georgina Miles’ set design is simple, yet effective. The most prominent pieces of set are some blocks and three metal grates that get moved around to change the setting. There is also a tree with tags for leaves. On these tags are written names of trans people who have been lost over the years. This tree is a really nice touch and whilst not actively used in the performance, watches over the actors and certainly adds a lot. The set is nothing extravagant, but effective in its job.

Chris Young’s sound design is really complimentary to the production with Ceri James’ lighting design representing the emotion of the piece well. The main criticism for these two is there isn’t enough. At times these aspects of design are really strong, but in others they are absent, in a way that doesn’t translate well.

As a cis woman, Kelly Jones takes on a big task of writing for a group of people we very rarely hear about. But, a task she handles well as far as the content goes.

It’s more Jones’ playwriting that lets her down. It’s not a bad script by any means, and as a piece that is ultimately meant to educate, it does a very good job. But as a compelling piece of drama it is lacking.

The three intertwined stories told as monologue is a form I personally love, but here it doesn’t work for some reason.

Characterisation also gets lost in an attempt to normalise the characters. Aspects of their personalities seem trivial. As well as this, some of the politics is very on-the-nose. Not an issue in itself, but again, it just doesn’t feel right here. It seems forced. Something that is maybe necessary for the piece, but needs to be worked into the production in a stronger way.

One decision made in the writing process that was really good, was to not make every story all “doom and gloom”. It would be easy to make this a sympathetic piece of theatre that looks at the struggles of trans people with the far too often real life consequences. And that reality is not ignored here. But neither is the reality that these are people. They act out, they do things that seem irrational at the time. But like any good playwright, Jones examines and explains them by the end of the story.

Perhaps in another performance context such as being held in a different venue, at an earlier time, in a school or university, as part of an education programme or whatever it is, this could be a fantastic production. And for people who know little about trans-issues, this would certainly be a very informative and emotional way to be introduced to these issues. So that must be commended. But, for the audience that, on the night I was there, seemed very clued up on these issues, it perhaps lacked the dramatic value that we go to the theatre for.

Not necessarily to be entertained, but to leave having found or felt something. And whilst for an audience without knowledge of trans-issues, this would be great. For those with that knowledge, it doesn’t offer much.

If this piece moves forward, the decision needs to be made whether this is an educational piece or a different form of theatre. Because both have their place and both are necessary for the growth of trans-theatre and the awareness of trans-issues in wider society. But this just feels like it’s biting off more than it can chew.

Humanequin is a strong, educational piece of theatre about the experiences of young transgender people in South Wales. Its flaws pale in comparison to its importance. 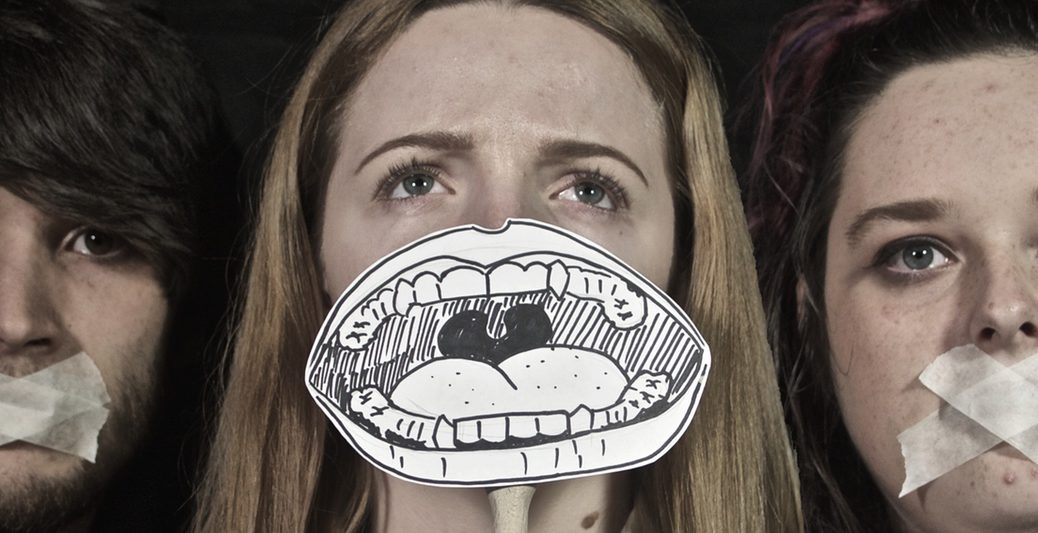 Aged from 11-20 plus, Mess Up The Mess Theatre Company make ‘awkward and brave theatre by, for and with young people’. Their new show ‘Us Proclaimed/Clywch Ni’ features over a dozen actors at the Wales Millennium Centre, Dance House.

It starts with a line up of the cast, who then turn their back on the audience, before assembling in a series of ‘scales’: alphabetically by first name, surname, home, then things start getting more honest, revealing, and then raw.

They line up in scales of sexuality, gender, feeling anxious, optimistic about the future, all while explaining what THEY think, stripping away the hypocrisy of the ‘real’ world, and showing us what’s actually real to them.

The honesty of this cast is humbling: personal stories, personal feelings, personal ‘secrets’ even, are not just divulged but proclaimed. Sometimes in simple words, sometimes with songs, or even comedy.

My personal highlight was young actor Ciaran Fitzgerald with cerebral palsy wearing a T-shirt stating ‘I don’t have cerebral palsy, I’m drunk’, explained later when he recounts being refused service at a pub because the barmaid thought he was drunk.

Perhaps a little blunt at times? I’m not sure, sometimes bluntness is called for. ‘We don’t want to preach’ they sing at the start, but they certainly make many good points.

Above all else they are wary of the future, some are worried but most are positive. Having seen – and more importantly listened – to them, I’m feeling a lot more optimistic about the future myself. 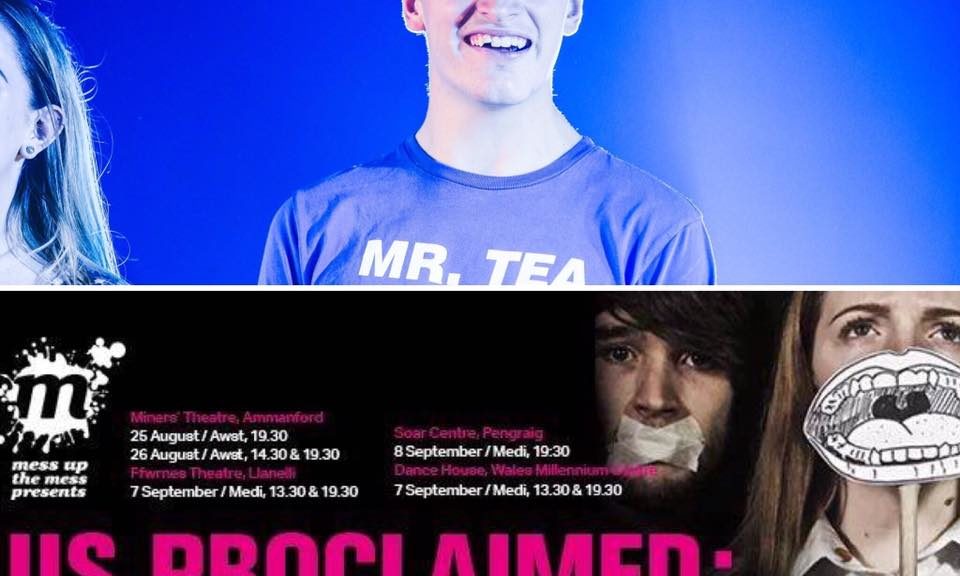 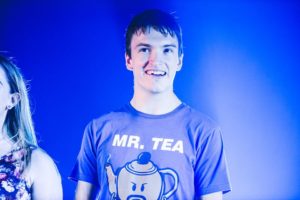 Hi can you give our readers some background information on yourself please?

My name is Ciaran Fitzgerald, I’m 22 and from Port Talbot in South Wales. I’m currently studying scriptwriting at the University of South Wales, going into my second year in September. I have cerebral palsy which effects the way I walk and talk. In my spare time I’m a member of Mess up the Mess theatre company, and have been since 2011 and have performed in many shows with them. 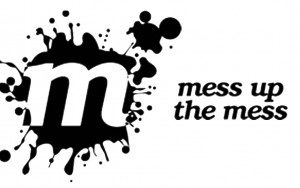 I got interested in the arts when I was about 13, I joined a local theatre company for young people with disabilities. After about 2 years I found the group wasn’t challenging me enough as a performer. Around the same time, Dafydd James was developing a play called ‘Click,’ about social networking and the concept of identity and the internet for Mess up the Mess Theatre Company. I played the part of Rob, a character who had cerebral palsy, I really enjoyed performing onstage with a diverse group of young people in a wonderful play. I have been performing, writing and volunteering with Mess up the Mess ever since. 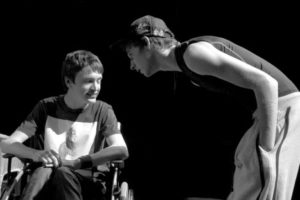 Can you tell us about  Us Proclaimed: Clywch Ni?

Us Proclaimed: Clywch Ni is a devised play with music which focuses on the life experiences of a group of young people between the ages of 11 & 22. The play explores themes including sexuality, gender identity, disability, mental health issues and also explores what the cast of young people think of each other and themselves. The question the play asks is whether we should seek to escape the difficulties we face in life, by vesseling them into ‘Robots’ or Musical theatre, and masking them in that way, or whether we should face our demons head on, and fully acknowledge their existence. Who do we want to be? What kind of society do we want to live in? These are the questions that the play asks.

Us Proclaimed: Clywch Ni throws a spotlight on the unique identities, perspectives, passions and interests of young people growing up in Wales today through music, comedy, poetry, drama and movement. How did you think the production has managed to capture all the different young people’s voices?

I would agree that the voices of young people have been clearly received and heard throughout the project, however, not all of these extracts of self-expression have translated into scenes or sections in the play. Every member of the cast does however have a chance within the play to voice their opinions on subjects including, sexuality, gender, anxiety, the relationship between themselves and their parents and so forth.  You may ask whether this play is fully representative of the experience of being a young person in Wales in 2017? I would argue not, and I would also argue that it does not need to be. The play is representative of the company of young people who perform the play, but perhaps not the young people of Wales in general. 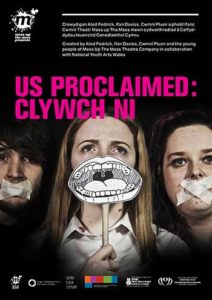 There are a range of organisations supporting Young Peoples creativity on this production. I wonder if you feel the current support network and career opportunities for young creatives feels ‘healthy’ to you? Can more be done?

I think that certainly more can be done. There is definitely a base platform for young creatives within organisations such as Mess up the Mess to exude and foster their creative talents, but perhaps as young people get to the age where they want to make more of a solid impact upon the arts in Wales, there is no solid further platform for them to move on to other than university education, which is no guarantee of a career in the arts. I think that generally, there needs to be more opportunities for young people who perhaps want a career in the arts, but don’t want the pressure or debt that university brings. I also feel that there needs to be more opportunities for arts graduates to attain employment in their chosen avenue of the creative industry. There seems to be an appreciation of the incredible artists, actor, writer and directors that we have in this country who are already proven at the highest level, but less of an incentive to promote the new talent coming through the ranks. Companies like Mess up the Mess and Get the Chance definitely need to be at the forefront of this, and do their best to guide their young people who want a career in the arts along the right paths. There should I feel also be more liaising between production companies and youth arts organizations to offer young people who are interested in the arts, opportunities such as internships and work experience. We have wonderful youth arts companies in Wales, we also have many wonderful professional production companies, we need to bridge the gap between these two.

You can catch performances at the dates/times below

Penygraig
8 September
Tickets on sale on the door through ArtWorks

Thanks for your time Ciaran