Another musical my girlfriend and I saw whilst in New York recently. Bear in mind, we saw the preview so by the time it opened a couple of weeks back, much may have changed.

Some trivia for you, Elsa is the first Disney princess to be crowned Queen 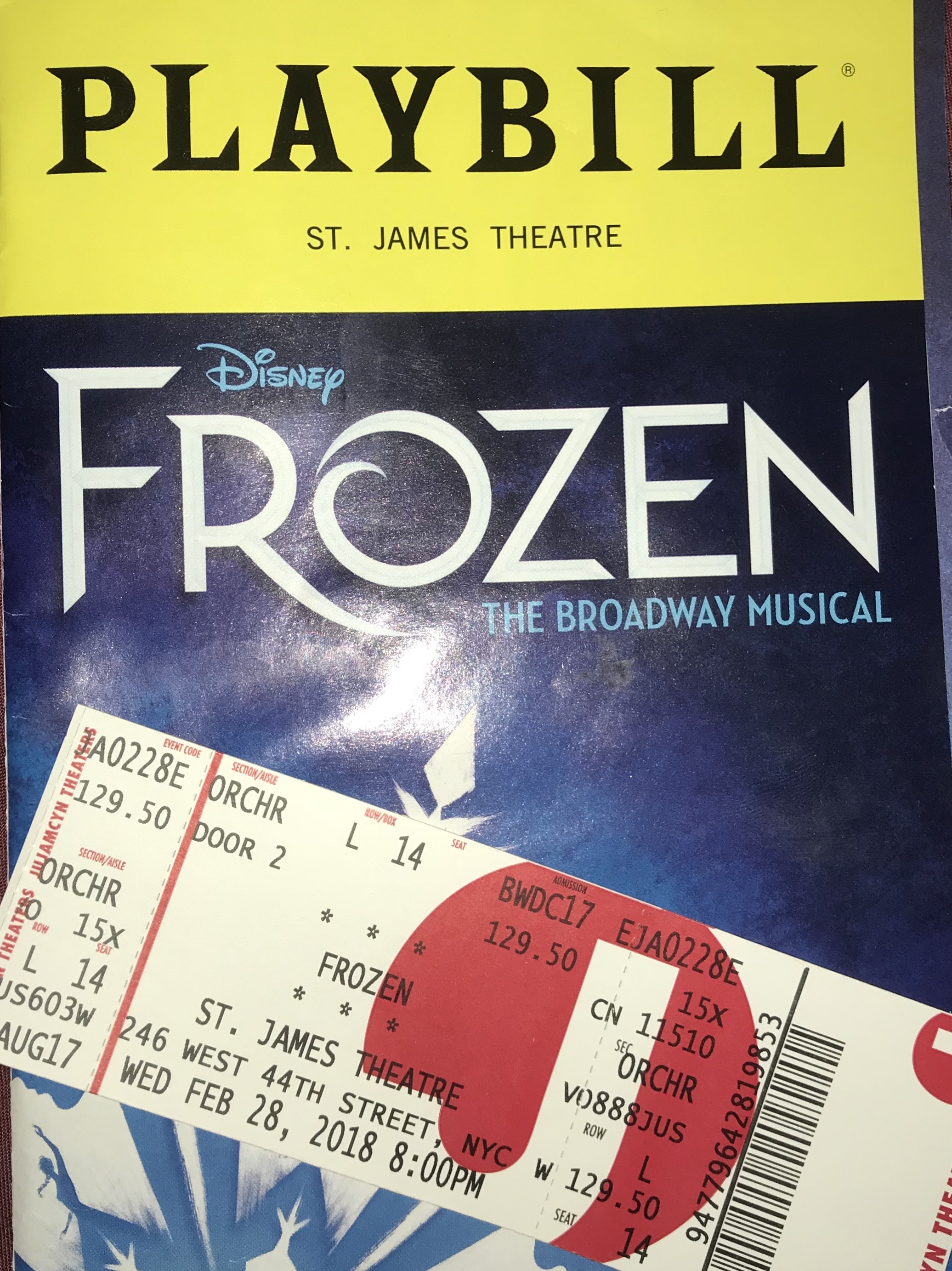 , it’s been translated into 41 different languages, plus Walt Disney wanted to produce a cartoon based on the Snow Queen for over 70 years. These are just some facts behind the highest grossing animated film of all time, which has now become a musical in its own right.

As I started this review, we saw the preview, but I can’t see much changing as what we saw was epic.

If you’ve not seen Frozen (seriously?) here’s a basic plot; Fearless optimist Anna teams up with rugged mountain man Kristoff and his loyal reindeer Sven and sets off on an epic journey to find her sister Elsa, whose icy powers have trapped the kingdom of Arendelle in eternal winter. The rest, well, go watch it on DVD.

St James Theatre is steeped in Broadway history, just recently it was 75 years since Oklahoma was first premiered there, and now another piece of Broadway history is being made with Disney’s Frozen playing out to packed houses each night.

Having watching the film once or twice (maybe more), the first half of the performance seemed to use all the songs – I couldn’t remember what songs were supposed to be in what place, but ending on Let it Go is definitely a show stopper into the interval.

There are several new songs for this production, and they help flesh out the story. True Love and What do you know about love will certainly stay with me, as will Hygge which opens act two. My only slight disappointment, is not being able to have a cast recording – needless to say, it’s being released in June 2018!

Caissie Levy plays Elsa, and Patti Murin, Anna. Both are extremely talented performers and will certainly leave you with goosebumps during certain sections. Olaf is played Greg Hildreth, and it might be a little unfair to say, but he’s so much like Josh Gad in his performance and vocals. You can close your eyes and think it him. Young Anna & Elsa were played by Mattea Conforti and Ayla Schwartz the performance we saw, and let’s just say I believe they’ll will be names to watch for in coming years.

The ensemble, the effects, and the orchestra all played a part in bringing the most beloved in car karaoke soundtracks of recent years to life, and then some. Like I saw previous, the only thing that I’m disappointed about was not having the cast recording, so for now I’ll have to make do with youtube clips – suppose in terms of a soundtrack, it’s a little bit of a fixer upper….

There is talk of it coming to London, but not for a little while – so in the meantime, get a flight to NYC, walk around Central Park, go see Starry Night at MOMA, and most important of all, believe in true love and spend an evening with the fair folk of Arendelle. Hold onto your ticket as you won’t want to lose it…or let it go.