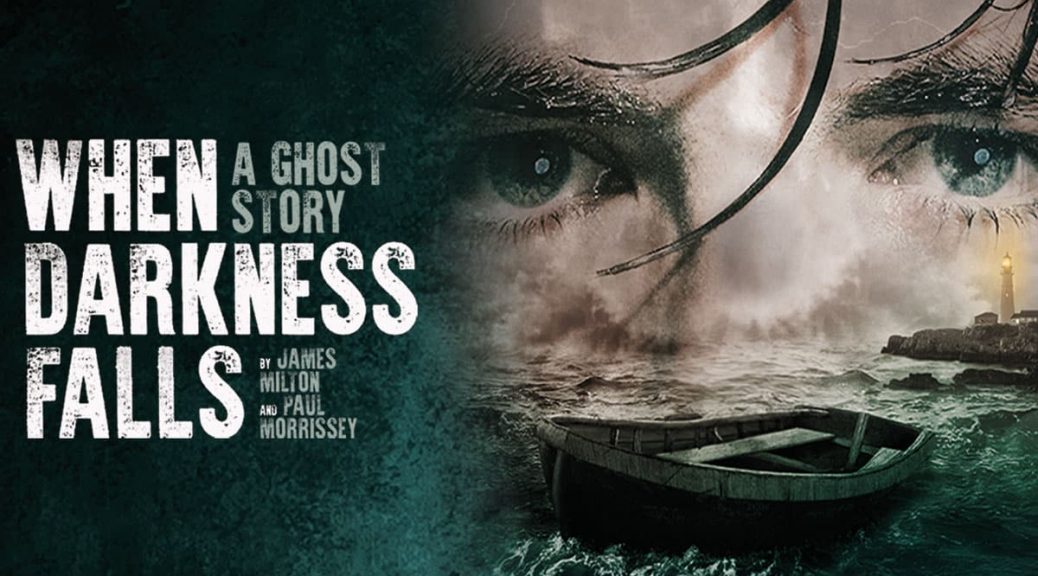 You know that feeling, right? When you’re alone, and yet you know – somewhere deep in your soul – that you’re being watched? That singular chill down the spine is what’s promised by When Darkness Falls, a new ghost story by James Milton and Paul Morrissey (who also directs). Now touring across the UK, this tense two-hander is playing at Cardiff’s New Theatre this week, with plenty of tricks and treats for audiences this Halloween season.

The story is deceptively simple: John Blondel (Peter Duncan), Guernsey historian and sceptic of all things that go bump in the night, invites a mysterious young man known only as The Speaker (Daniel Rainford) to record the first in a series of podcasts charting the ghoulish history of the island. A storm is brewing outside but also within, as nightmarish stories of torture, murder and revenge unfold, and long-repressed secrets are dragged into the light.

Save for an eerily effective (and, dare I say, ghostly?) performance from Rhys Jennings, who voices the parapsychologist on the tapes and who understudies both lead roles (you can check out our interview with Rhys here), Peter Duncan and Daniel Rainford are the only two people onstage throughout. They do an excellent job of drawing you in to the play’s strange, spooky world and holding your attention (not to mention your breath!) And it’s the kind of show which yearns to be watched again, once you know all the twists and turns.

Though he became a household name through his beloved tenure on Blue Peter, Duncan began his career on the stage in Laurence Olivier’s National Theatre. Here, Duncan conveys a very sympathetic sense of jaded affability before descending into something akin to madness. He spars extremely well with Rainford, who is fresh off his acclaimed turn as Tommo in Private Peaceful, a role he originated. Rainford is a captivating storyteller, and his calm and measured demeanour ably conceals the deep waters within. There are moments when the pair ‘step into’ the characters of the stories they tell, which I would have loved to have seen mined further. And while the Speaker’s arc blossoms into something fittingly tragic, Blondel’s is an unfinished symphony – perhaps setting up a sequel. You certainly get invested enough in the characters and the story to want one.

Their interactions are underscored by a host of ghostly illusions, courtesy by John Bulleid, Associate of the Inner Magic Circle with Silver Star, who was part of the team behind Harry Potter and The Cursed Child. The effects – and jumpscares! – are cleverly interwoven into the set, which is designed by Justin Williams, and by Bethany Gupwell’s lighting and Daniel Higgott’s sound. The set – a dismal, purgatorial office – is filled with shadowy corners and a creepy corridor of opaque glass that makes every reflection ghostly.

While the show gets a little less scary in the second half – and there are some deliberately funny lines that Duncan in particular delivers with relish – it ramps up the tension the way a dripping tap becomes a tidal wave. This is a dread that oozes, that seeps into the cracks of your very soul. What’s scarier still is that it’s based on truth. The tale of the German soldiers was especially haunting, as was its message: that the most frightening thing of all is the human capacity for cruelty. That sort of horror is absorbed into the walls of a place; it cannot be bricked in or painted over. It can only be confronted.

While the play ends on a somewhat ambiguous note, it leaves us with a question: do you believe in ghosts? By the time the curtain falls, you might just get your answer. Suspenseful and spooky, this is the perfect show to get you in the Halloween mood. When Darkness Falls, will you rise to meet it?

When Darkness Falls is playing at the New Theatre Cardiff from 11 – 15 October (you can find out more about the production and book tickets here).