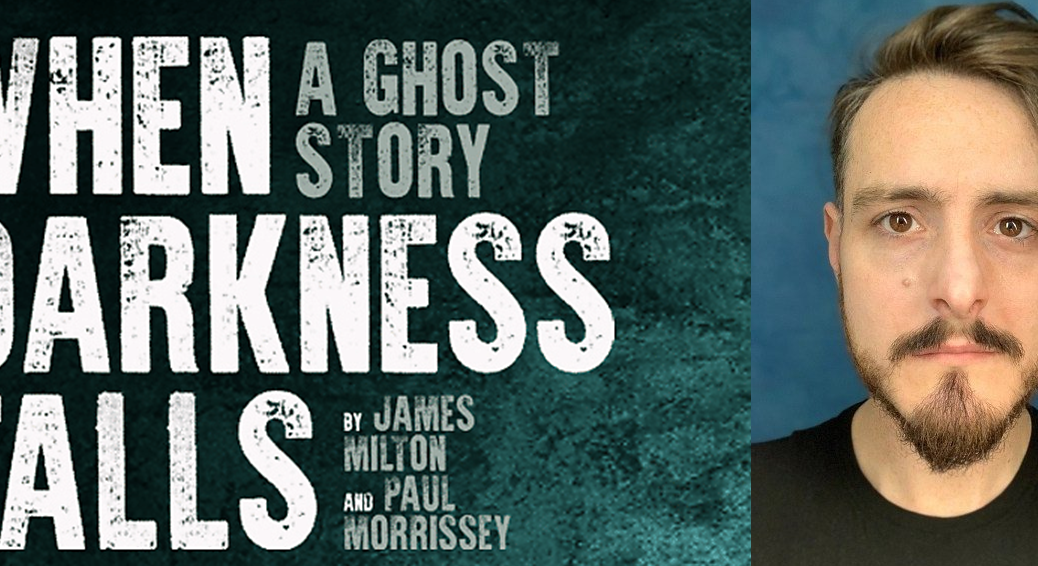 Get the Chance Community Critic Barbara Hughes-Moore speaks with actor Rhys Jennings, who is part of the touring cast for the When Darkness Falls. This spooky stage thriller is written by James Milton and Paul Morrissey, and is based around the legend of ‘Guernsey’s Ghosts’. The show is playing at the New Theatre Cardiff from 11 – 15 October (you can find out more about the production and book tickets here). Rhys chats about understudying the two lead roles, how the cast keeps it fun behind the scenes, and why you might just walk away from the show believing in ghosts yourself…

This interview has been edited for clarity.

Thank you for taking the time to sit down and speak with me today, Rhys.

Tell us a little bit about When Darkness Falls.

When Darkness Falls is a two-hander ghost story set in the modern day but which brings up lots of stories of the past and hauntings and ghosts. It’s set on the island of Guernsey, so it takes all this local mythology and weaves it into a two act play over the course of one night. It aims to provoke debate about what ghosts are and what the paranormal is, but also with a few scares. It’s good fun!

So what is your role in the play and how did you get involved?

So I have a very interesting role. As I said, it’s a two hander and I am the solo understudy in this show. So it’s your classic two hander where you get an older and a younger actor so they needed someone halfway between through the two! It’s a very odd experience, actually: I’ve done a lot of understudying before, but this is basically an entire play, and you’re always on edge in case someone gets ill or is off, and up you go with not much rehearsal.

It’s really interesting, and it’s lovely to be part of such a small company as well, this is a very tight-knit group of people. We’re only a few weeks into the tour at the moment and everyone’s very close, and it’s a really fun company to be part of.

How do you manage to keep it fun behind the scenes when you’re in such a scary show?

I think the guys have really managed to just enjoy the text of it, because there’s lots of storytelling which could easily become very drab and dreary. It’s about two people interacting with one another, and how a story can trigger more memories. It’s been really fun to be part of that process and to be able to offer some input as well to the guys as they work.

Do you have a favourite role out of the two?

It’s tricky! Peter Duncan, who is famous for many things but many have a soft spot for his Blue Peter days, is playing the older part, and there’s an incredible young actor in his 20s called Daniel Rainford. So I think perhaps you’d put me in the younger part but I’m looking forward to one day playing the sort of roles Peter Duncan does. I do overall prefer the older role that is a storyteller and who has a bit of a mental breakdown throughout the course of the night. That’s more interesting to me, I think.

Have you performed at the New Theatre before?

I’ve performed in Cardiff before but never at the New Theatre! I’m really looking forward to coming to Cardiff, because I trained at Royal Welsh College of Music and Drama. It’s really nice to make a return visit because I haven’t done anything that’s come back to Wales for a good few years. I’m really excited to show the guys in the company around Cardiff.

What do you think Welsh audiences will take from the show?

While it’s set in Guernsey, it has a similar bucolic, rural feel and a lot of similar folklore and ghost stories. I think Welsh audiences will enjoy it for that. It’s quite a universal debate the characters are having over the course of the evening about what a ghost is: sometimes it’s repressed trauma and guilt, so a lot of that is very universal. It’s an interesting thing to watch.

Without spoiling anything, is there a particular moment you would want audiences to look out for?

That’s a really good question, because it’s one of those plays where audiences might think they know what’s going on – but if they pay attention they’ll be able to see the ending. It’s a bit like an Agatha Christie mystery: if you’re canny enough, by the end you get that real satisfaction of figuring out the ending. So listen and see if you can pick out a few of those themes that are repeated. Do a bit of detective work as an audience!

That’s a great challenge to give audiences! What do you think the secret is to make a good thriller in the theatre?

It is tricky! I think it’s all about suspense and rhythm, and also having two little stories going on: one where the audience might know a little more than the characters at certain moments and vice versa. It’s about who has the information, and you can gift that to an audience, make them feel that they know something that even the characters don’t. That can be really exciting for a thriller. Or you can have an object that has been in the background the whole play, and eventually pays off – in fact, we might have one of those in ours!

The last ‘spooky’ show I saw at the New Theatre was Ghost Stories, which was also made into a film – I didn’t sleep for a month!

I was involved in the film! I had a very last minute call from my agent asking me to fill in for an actor on the day of the cast readthrough. I’m still fairly early in my career, and I’m not in the finished film, but I was reading lines with Martin Freeman and all these amazing actors. I don’t know how I managed to get a ticket into that room, but that was a great experience.

So you were like a ghost: an unseen presence that kept the whole thing going?

Yes! I like the acting profession for all these strange little moments you have – it’s never boring. I straddle a bit of writing, a bit of acting and voiceover, and I like constantly dipping my toe into different things. You get all these strange, wonderful little anecdotes.

Does being involved in such different mediums – film, voiceover, theatre – give you different shades of ‘acting’?

Yes, and the things you learn from one thing help you in another. I got very into puppetry for a while and toured the world doing it, and it’s only much later when you’re doing something more text-based, that you suddenly realise the connections. Through the course of your career start putting things together in unexpected ways. It’s really fun. We’ll be performing in Guernsey a couple of weeks after Cardiff, and it’ll be interesting to see what different audiences react to. Different places have a different sense of humour. I’m really excited to see how Cardiff audiences will respond to it!

Is there something that really surprised you about being part of this show?

In the early part, I thought it was going to be very lonely as there’s not many people backstage. And while it can be lonely at times, I’m surprised by how much warmth and humour there is; a real camaraderie to the show and I feel very included in that. Theatre can sometimes be quite hierarchical: my first job was understudying in a show that had enormous stars all the way down to new graduates fresh out of Drama School, and there was quite a lot of hierarchy to that. Here, though there’s a difference in age between all of us, it feels like we’re working on this together. Especially after everything we’ve been through the last few years, it’s nice to be part of a family again.

I’m not quite in the generation that grew up with Peter, but in my generation of Blue Peter presenters they would talk about his adventures, like him scaling Big Ben. There are lots of stories and ancedotes that Peter is just brilliant at: listening to him, you get the sense that Peter would go over to someone and say ‘I’ll give you a Blue Peter badge if you help my friend’. It feels like a skill we could all do with!

What’s coming up for you after this tour?

I’ve spent a long time writing a musical called The Wicker Husband, which opened at the Watermill Theatre earlier this year, and hopefully it will have a future life as it’s a beautiful thing. Do keep an eye out for it: it’s about an old basket maker deep in the swamp who weaves creatures out of wicker who come to life, and he weaves a beautiful husband for a girl who everyone thinks is ugly, so much so that she thinks herself that she’s ugly. Throughout the course of this beautiful musical, she learns that there’s no such thing as ugly; that ugliness isn’t something you can see.

Three words that sum up When Darkness Falls for you.

Do you believe in ghosts?

Do you really? That line actually pops up in the play.

Do you think that audiences will believe in ghosts after this show?

I think those that are skeptical will be more open to the idea that ghosts can mean. ‘What are ghosts?’ is an interesting question to go in with.

Thank you, Rhys – we can’t wait for the show!