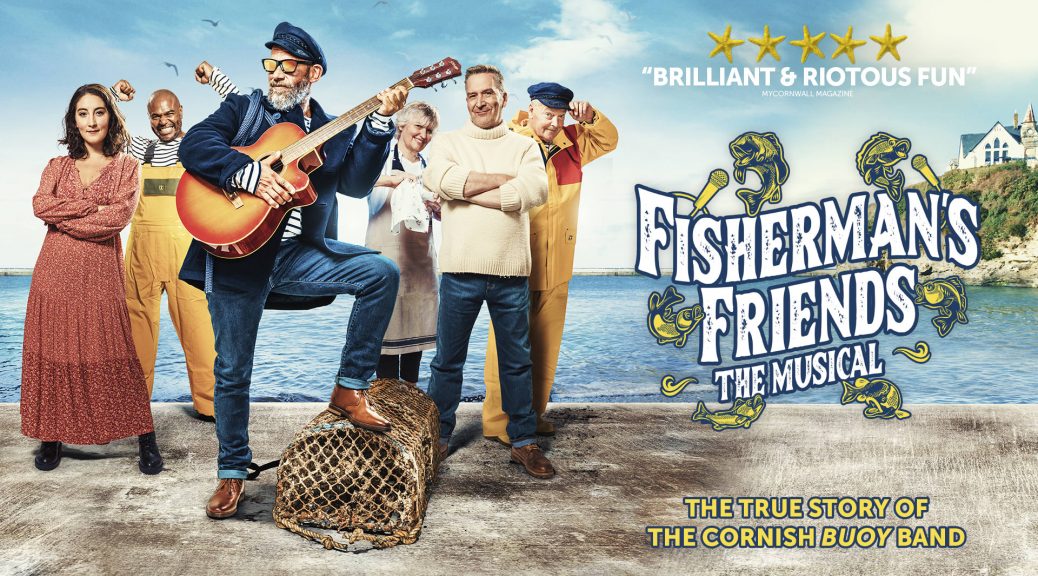 This is a syndicated interview for Fisherman’s Friends: The Musical, which is performing at the New Theatre Cardiff from 25-29 Oct 2022. Stars Robert Duncan, James Gaddas, Susan Penhaligon, along with director James Grieve and writer Amanda Whittington, discuss why it’s the ultimate feel-good show.

As the world premiere production of Fisherman’s Friends: The Musical embarks on a UK and Ireland tour, director James Grieve promises audiences are in store for “a feel-good, foot stomping, sea shanty musical telling the astonishing story of the world’s least likely boyband”.

Based on the true story of the Cornish singing sensations and the smash hit 2019 film about them, the show has already played to packed houses at the Hall for Cornwall in Truro – where it broke box office records as the most successful production in the venue’s history.

Grieve is in no doubt as to why the musical, with its mix of comedy and drama, was so rapturously received in Truro and why it is sure to captivate audiences around the country. “It’s so heart-warming to see a group of very normal, humble people achieve something extraordinary,” he says of the tale of a bunch of fishermen who come together to sing traditional working songs to raise money for charity, never expecting to land a record deal and end up performing at the Pyramid
Stage at Glastonbury.

“The real Fisherman’s Friends are ordinary blokes who work hard as fishermen, farmers, builders and shopkeepers. We all see ourselves in them. They never sought fame and fortune but it found them and their remarkable talent, and it’s wonderful when good people get justly rewarded. That’s what makes this story so uplifting. But more than a story about finding fame and fortune it’s a story about friendship, loyalty, community and the unbreakable ties that bind us, and it is full of humour.”

The multi-level set designed by Lucy Osborne recreates the fishing village of Port Isaac, including the famous Golden Lion pub where the lads first begin singing over a few pints, as well as the Atlantic ocean and locations in London.

There’s also a life-size boat on stage, with the director adding: “We wanted to capture the hard graft and very real danger of life as a working fisherman at the mercy of stormy weather and
rough seas. I’m fortunate to be working with a world-class team of creatives who have summoned howling winds, towering waves and vicious storms through dazzling design, lighting, sound, choreography and music.”

As in the film, the audience discovers the Fisherman’s Friends through the eyes of Danny, a music manager who stumbles into Port Isaac and finds his life transformed by the village, the band and the songs.

Starring as Jim, the group’s lead singer, James Gaddas is no stranger to musicals. He’s known for Bad Girls and Hollyoaks on TV but he’s also been in the likes of Billy Elliot, Spamalot
and Mamma Mia! on stage. “But I’ve never done anything like this before. It’s earthy and visceral. The music is strong and grounded. It dates back as long as 200 years ago, with the fishermen adapting it for today but staying true to those roots.”

There are 37 musical numbers in the show, including most of the songs from the film and many more besides, with the singers accompanied by seven folk musicians who between them play around 40 instruments. “And the band are stunning,” James enthuses. “You get a cappella performances, then the counterpoints when the musicians join in.”

The actor describes Jim as a man for whom his boat, his crew and singing with his mates are his life. And Gaddas feels there’s a universality to the characters, noting: “These are people you can relate to and we all want that magic moment when things turn around for everyday people doing everyday jobs. It’s like a kid playing football in the park and a scout just happens to be there. It’s something unexpected suddenly happening to the underdog.”

Robert Duncan plays Jim’s father Jago, who is in his 70s and the elder statesman of the group. Born in the Cornish town of St Austell, Duncan didn’t hesitate to say yes to the show. “It’s set in a place I know very well,” he says, “and I was excited about doing something from my own neck of the woods. It’s like me paying homage, plus I’d never done a musical before.”

The star of Drop The Dead Donkey has toured in Twelve Angry Men and Rehearsal for Murder. How is he finding singing the sea shanties? Robert laughs. “It’s certainly not water off a duck’s back but David White, our music supervisor and arranger, told me ‘We don’t want the most wonderful voices in the world, these are fishermen, so do it as you believe working people would sing’. I did sing in choirs when I was younger but before this I’d never have had the confidence to sing a song on stage. Somehow this felt like the right time and when I was given the opportunity I grasped it with both hands.”

The story, he believes, is in many ways specific to Cornwall yet it has a universal appeal. “Some of the things in it are peculiarly Cornish but the idea of how the landscape shapes people is
true wherever you go. Plus it’s about community and getting through things together, which is now more relevant than ever.”

Duncan believes audiences around the country are going to love the songs in the show. “The a cappella group, which I feel privileged to be a part of, creates such a strong sound and it touches people. There’s a lot of emotion in this play and it’s not just a cappella, we also have the folk band who are so talented they can play anything. They become a part of the community on stage, wondering around with harps and double basses.”

Playing Jago’s wife Maggie is Susan Penhaligon, who was also raised in Cornwall and says: “There’s an old phrase ‘Cornish women be brave and stubborn’ and that’s what Maggie is. Her
roots are in Cornwall and she’s typical in that she’s independent, free-thinking and tough. I love her and I feel like I know her.”

Having lived in St Ives and Falmouth from age six until she went to boarding school in Bristol when she was 11, Penhaligon adds: “Fisherman’s Friends is a Cornish story and they don’t come along very often. As far as I’m concerned, we’re exporting the right kind of Cornish culture rather than bobbing boats, pasties and jam and cream on scones. It’s not the picture postcard image, it’s the real Cornwall.”

Asked if she can relate to Maggie as a character, she laughs. “Yes because I think I’m also brave and stubborn.” And she agrees the story will resonate around the country. “It’s has a truth to it and it’s about history. There’s something basic and organic about it that touches people and the music is fantastic.”

The actress came to fame in Bouquet of Barbed Wire and is known for A Fine Romance and Emmerdale on TV and a variety of stage roles including Three Sisters and Of Mice and Men. Fisherman’s Friends is only her second musical, after she played Fräulein Schneider in the 2017 tour of Cabaret. “And I’ve never been so terrified in my life,” she recalls of singing on stage for the first time, “but by the end of the run they couldn’t get me off the stage.” She laughs. “When it comes to the singing, I’m an actress who gets away with it.”

Adapting the story for the stage, Amanda Whittington points out: “It’s a fascinating world to explore and discover. Port Isaac and the fisherman’s way of life is rich territory for drama and the characters are funny, real and recognisable. “Then of course there’s the sea shanties, which are beautiful and timeless. The traditional shanties are the backbone of the story but there’s also contemporary songs of the sea and wonderful new songs written especially for the show.”

The writer, whose previous stage adaptations include Saturday Night and Sunday Morning and Tipping the Velvet, is seeking to strike a balance between fact and fiction, explaining: I love the fact it’s about a real place and time, yet it’s full of mythical and magical elements. It’s about making sure we stay true to the original fishermen’s story but embracing the possibilities theatre brings.”

As for what she hopes audiences will take away from seeing it, Amanda says: “Times are tough and we want Fisherman’s Friends to be a joyous and life-affirming experience for all. It’s a
story about the place you call home, whatever and wherever that is. I also think you’ll be literally taking the songs away in your head and heart. Once heard, they’re never forgotten.”