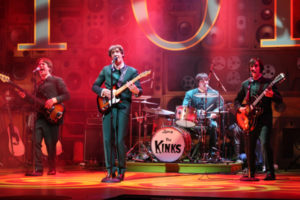 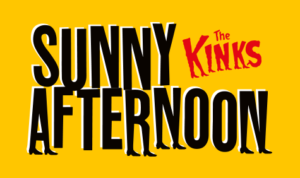 So it’s January, everyone is detoxing, skint after Christmas and bruised after Brexit, Trump and a string of celebrity deaths in 2016. I can hand on heart say that if you are suffering from SAD or have lost all hope for the year ahead, you need to find the sun behind those clouds and get your butt down to WMC pronto to see ‘Sunny Afternoon’, the touring production running until Saturday 21st, before it shuttles off elsewhere.
Even if you are not a fan of The Kinks or a fan of musicals featuring the back catalogue of certain bands (let’s not even mention ‘Viva Forever’ here!), you will be hard pressed to find a more inclusive and entertaining musical in 2017.

The soundtrack to your Mam and Dad’s wild years, the show focuses on four working class lads riding the crest of the wave of the ‘British invasion’ in the 60s – the meteoric highs and the crushing lows.  Natalie Gallacher/Pippa Ailion’s casting of Ryan O’Donnell and Mark Newnham as brothers Ray and Dave is a triumph – the pair have sensational synergy and energetic friction on stage and O’Donnell’s sweet vulnerability shines through his entire performance.
Newnham is unmissable as outrageous rebel Dave, everything from his swagger, his cockney banter and his swinging from the chandelier in a pink dress had the audience eating out of the palm of his hand.
The most famous of the Kinks’ songs were cleverly deconstructed and re-packaged, allowing us to delve further into the back story to possibly the most influential riffs and tunes ever written.  The scene where Ray and Dave are trying to perfect the edgy baseline to their hit song ‘You really got me’ is pure magic, reverberating through your chest and rattling around your rib cage.

There are some delicious comic lines, especially from the plummy stockbrokers-turned-agents Robert Wace and Grenville Collins, who groomed the four for stardom, even coming up with their name, with the help of another agent Larry Page.  I couldn’t help laughing out loud when one of them says in a voice that may remind you of certain Harry Enfield characters: ‘Now…let’s talk about it over a nice plate of kippers’.
You’ll laugh when Ray’s Dad (played by Robert Took) complains about ‘wearing out shoe leather’, about the house prices in Muswell Hill (£3,500 – with a £500 deposit!)…and you wonder what the hell Mr Davies would make of the prices in Muswell Hill these days. This is nostalgic but not cloying, sentimental but not syrupy.
There are multiple sharp observations and throwaway comments referencing other 60s bands and celebrities. When the managers find Ray in a depression in bed with Rasa his wife, one of them quips: ‘You wouldn’t find John Lennon lounging around in bed with his wife!’.  Later on, when the band are on tour in America and are uneasy about the guns and violence there, their manager assures them ‘You’re a pop star! You’re not important enough to shoot!’.

A blueprint for future musical trends 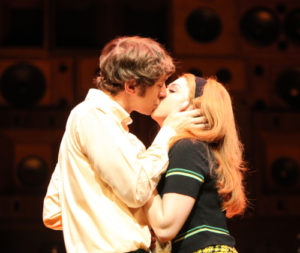 The real pleasure for those not born in the 60s is the discovery of music you didn’t know existed – for my parents’ generation, it’s all familiar territory.  But if you only know a handful of the old (and most famous) of songs by the Kinks, you get to unwrap a new gift.
Aided by the clever studio/house/concert hall design of the stage by Miriam Bluether and the choreography by Adam Cooper, watching ‘Sunny Afternoon’ will transport you back to the excitement, the optimism and the feeling of being on the cusp of something completely original and unchartered.
From the time THAT guitar riff kicks in, you understand exactly what it is your Mum has been harping on about all these years. It’s hard to imagine how utterly new, how extraordinary this must have felt for teenagers in the 60s, to go from stale crooners in suits to long haired rebels with rock guitars.
The Kinks were the masters of social commentary which would foreshadow the later emergence of musicians and bands of my generation: the blueprint for American garage and rock bands like grungy Nirvana in the 80s and the Britpop boom in the 90s.  I hadn’t realised it until last night but ‘A well respected man’ was clearly influential for Damon Albarn and his crew with Blur’s hit ‘Country House’. 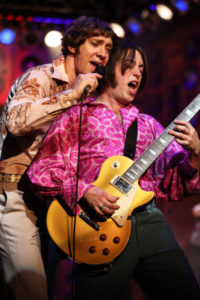 Credit must be given to the wonderful pacing, characterisation and story for the musical by Ray Davies himself.  It’s clearly a personal and heartfelt snapshot of an incredible moment in history.  The result is rebellious, clever and heartfelt and I witnessed something I hadn’t yet seen at the Wales Millennium Centre: an entire audience on their feet, no awkward seat lurkers in sight. Inhibitions were gone and for a moment I felt like we were watching the real Kinks.  I was genuinely sad to leave the theatre and re-emerge into 2017.
My Mum, who had accompanied me (and by the end was a bawling mess) had enjoyed every last morsel of the show. I asked her why she was crying, she said: ’I remember it – I remember it all!’.  If only to see what your parents saw, feel how they felt and see how bloody awesome the fashion and sounds of the sixties actually were, this is an absolute treat of a show.
Type of show: Theatre
Title: Sunny Afternoon
Venue: Wales Millennium Centre
Dates: 17 – 21 Dec (Touring show)
Directed by:  Edward Hall
Music, Lyrics, Original Story: Ray Davies
Choreographer: Adam Cooper
Sound: Matt McKenzie
Musical Director: Barney Ashworth
Cast:
Ryan O’Donnell (Ray Davies)
Mark Newnham (Dave Davies)
Richard Hurst (Larry)
Tomm Coles (Grenville Collins)
Joseph Richardson (Robert Wace)
Lisa Wright (Rasa)
Garmon Rhys (Pete Quaife)
Running time: Approx 3 hours (with interval)
Produced by: Sonia Friedman Productions and Ambassador Theatre Group