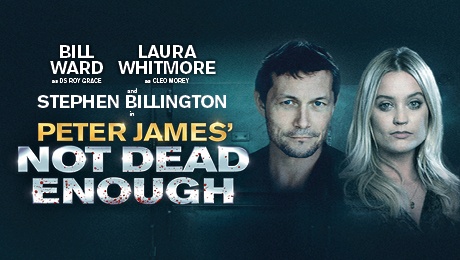 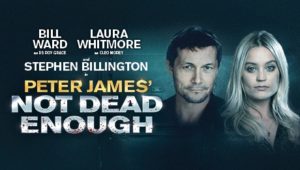 NOT DEAD ENOUGH – if ever there was a understatement for a title of a play this is it. This adaptation, although from a book of the same title, was a very much alive, fast moving drama which moved at a pace that ensured the audience was running alongside, wanting more but never left behind.

Peter James is an acclaimed author of crime fiction and Not Dead Enough is the third book in a series of 13 featuring DS Roy Grace. As a writer of crime fiction James has researched extensively interviewing convicted murderers and has a great insight into the criminal mind and indeed that of the seasoned detective. As an avid reader I am always in awe of the person who has the ability and imagination to adapt a book for the stage but Shaun McKenna has this cracked. He has done an outstanding job of bringing the story to life in the most believable way and I am sure with the approval of the novelist, Peter James.

All credit to an amazing Creative Team of; Director, Designer, Lighting, Sound, Production, Costume and Props who have created an environment before us of a Pathology Laboratory, a Police Station and an outside scene where it is as easily believable as the more sophisticated setting of the lab. In fact the staging of this production is the key to its ability to draw the audience into the world that James’ has created for us.

It is difficult to talk about the story line without giving away too much. If you have read James’ novels then you will be familiar with DS Grace and know him already and you will be entranced as the James’ characters are brought to life before you.

I guarantee this crime thriller will have you on the edge of your seat. Indeed at one point the gentleman sat next to me exclaimed out loud, in reaction to DS Grace searching for something, “It’s not in the box!” clearly this audience member was totally immerced in the investigation, as were we all.

All productions have their leading roles however, in Not Dead Enough all the characters were of equal importance to the storyline and you would be easily convinced that they were police officers who had worked together for years not actors playing a role. 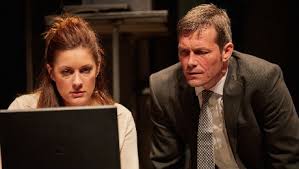 However, that said I have to mention Gemma Stroyan who played Bella Moy and Gemma Atkins who played Sophie Harington.

Stroyan gave us a confident portrayal of a female police officer which was seamlessly believable at every level, comfortable in her skin and confident in what she was about. I would like to think that maybe James would take her character in the future and promote her to the central character in her own novel(s).

Atkins also gave a polished performance as Harington keeping us guessing about who she really was and what (if anything) she was really up to. 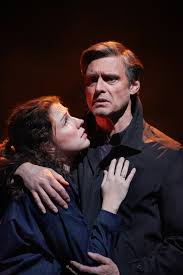 During the interval the auditorium was alive with chatter and theatre goers were talking not only amongst themselves and also with neighbouring audience members as to what they thought was going on, who had done what and making predictions about how it was all going to conclude.

Like DS Grace, I wanted to believe the main suspect, but how could we?! What was the evidence showing us? Who was safe? Who was next? WHAT WAS GOING ON?!

It would be wrong for me to tell you more but be aware it is not over till it’s over and even then not all the questions will have answers.

At curtain call the volume of the applause was only just that above the whistles of approval. This is an unmissable crime thriller that will keep you on the edge of your seat and wanting more all the way until the end.

I for one will be looking more closely at James’ novels and perhaps it will be my summer reading for 2017. 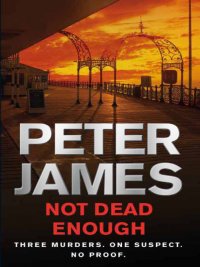 And for the record, on the way out people were still chatting and animated about what they had just seen.

NOT DEAD ENOUGH plays at Cardiff’s New Theatre from;
Tuesday 13 June – Saturday 17 June at 7.30pm
On Wednesday, Thursday and Saturday there are performances at 2.30pm.
For further details about the show or to book tickets call the Box Office on 02920878889.