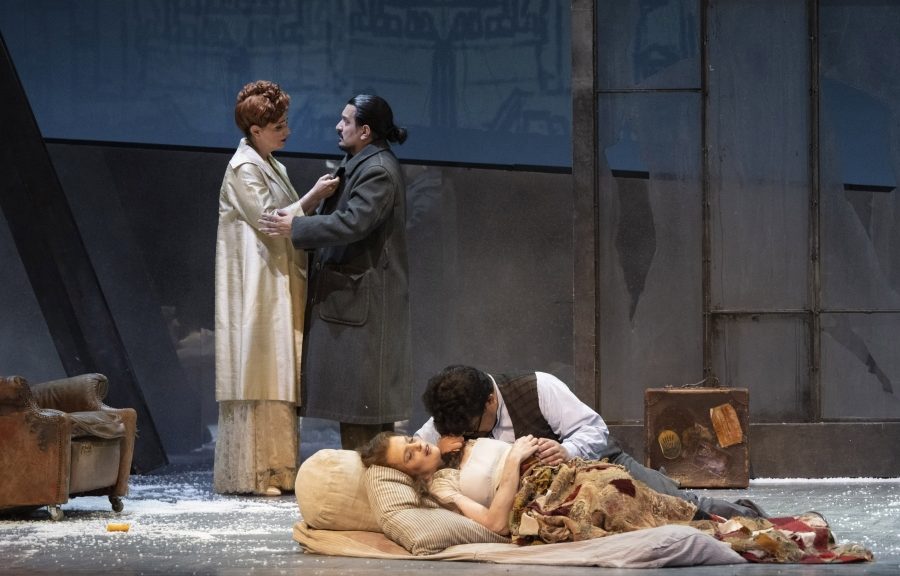 The Welsh National Opera reproposes Annabel Arden’s 2012 production of La Bohème, set in the early 20th century. It is a straightforward interpretation of Puccini’s opera with a minimal and, at times, unimaginative setting. The WNO succeeds in offering a production that is skillful and entertaining. Strong performances bring to life the romance, tragedy, as well as comedic elements of the opera.

Rodolfo (Jung Soo Yun) and Marcello (Germán E Alcántara) are skint artists living in a cold attic in Paris. Rodolfo falls quickly in love with frail Mimì (Elin Pritchard), but their complicated relationship flounders under the pressures of poverty and Rodolfo’s guilt for making Mimì ill. In contrast, Marcello’s affair with coquettish Musetta (Aoife Miskelly) is passionate and often funny. The friends Schaunard (Mark Nathan) and Alcindoro (Alastaire Moore) add to the bittersweet comedy of the production.

Elin Pritchard, as Mimì, and Aoife Miskelly, as Musetta, shine giving by far the best performances. Pritchard, who was a superb Michäela in a past WNO’s Carmen, is graceful and powerful. She conveys a tender tragedy infused with love and loss. Aoife Miskelly, who previously delighted the audience as the Cunning Little Vixen, performs with brio, charm, and sophistication. Miskelly has a beautiful light in her voice.

Baritone Germán E Alcántara gives a powerful performance with. Jung Soo Yun has a beautiful tonality but limited range. Jung’s voice lacks the power needed to counter the orchestra. This is disappointing, especially after he gave a masterful performance in Les Vêpres Sicilliennes.

The quartet of the two couples Mimì and Rodolfo, and Musetta and Marcello is effective though underwhelming. Mark Nathan, as Schaunard, and Alastaire Moore, as Alcindoro, give robust performances holding the scene in Act Four.

The WNO’s choir is impeccable, as always, with a strong stage presence. The orchestra, under the baton of Lee Reynolds, gives a solid performance. This production of La Bohème is let done by the rehashing of a past production lacking in imaginative interpretation and an overly minimal setting, which here includes video projections of birds and of snow.

Under the direction of Lindy Hume, the Welsh National Opera’s Madam Butterfly is set in an imaginary dystopic future to convey the cruelty of imperialism. The opera is no longer set in Japan but in an exotic oasis for the pleasure of wealthy American men. It reminded me of the 1964 Russian propaganda film I Am Cuba by Mikhail Kalatozov. In the film, Cuba is the seductive playground of rich Americans, a country turned prostitute by Batista. Although too propagandistic in narrative, the unorthodox cinematography of I Am Cuba, with its extreme wide-angles and complex tracking-shots, made the film unsettling and powerful. Alas, Lindy Hume’s anti-colonial vision for Madam Butterfly loses force by decontextualising the drama.

The opera begins with women in white short tulle dresses and tall pink wigs. Among them is Cio-cio-sa/Butterfly, who is to wed American soldier Pinkerton. The action takes place in and around a two-storey rotating white cube. Hume sought to emphasise the exploitation of Butterfly who is sold as trophy bride and quickly discarded. Butterfly is a victim of a misogynistic colonial society. Yet, by erasing Japan from Madam Butterfly, the colonial othering of Cio-cio-sa is lost. Relationships of power are all dependent on context. They cannot be abstracted. Cio-cio-san is the trophy bride because she is a Japanese young girl to be collected like a colourful butterfly.

In addition, there is a lot more to Cio-cio-san than Hume’s direction implies. She is here painted as a victim, disregarding how 15-year-old Cio-cio-san, notwithstanding being still a child, escapes her family and clan. She goes against her home society to affirm her own will. She stays loyal to her American husband and to his country to the very end. The tragedy lies in the fact that she finds her downfall in her loyalty and shame. Alexia Voulgaridou gives a rounded performance making one forget the awkward futuristic setting designed by Isabella Bywater.

Voulgaridou gives an impeccable performance as Cio-cio-san. Her voice is powerful and agile; it develops in intensity as the tragedy unfolds. Her interpretation is subtle and convincing. Kezia Bienek, as Suzuki, is also noteworthy. She conveys the melancholy of her role as Cio-cio-san’s sister perfectly. Together, Voulgaridou and Bienek deliver a beautiful duet full of warmth.

Julian Boyce as Imperial Commissioner and Tom Randle as Goro give solid and sophisticated performances, less impressive is Peter Auty’s Pinkerton. Excellent is the orchestra conducted with fervour and depth by Carlo Rizzi. The impressive performances, the orchestra, and Puccini’s music make one forget the contrived setting. (4 / 5)
I sat on a wooden seat I remembered well from school days, from weddings, from funerals; from happy, sad and scary times. The doors open to the green light and the bird song, to the passers-by and the church bells.

We are a congregation of grey hairs, crumpled linen and sensible shoes, mostly. Only a few lift their phones to film as the orchestra and conductor walk in but this is not the place for pop concert technology and they are gently reminded as such.

This is the place for the wet velvet voices of the truly gifted to fill these old bones of a building with the beauty of centuries. And I am lost – I have no notion how to describe the feelings inside me.

Bryn Terfel – always magnificent with the strength of the lion; Rebecca Evans – the exquisitely powerful song of the angel; Hannah Stone – enchanting us all with the magic harp; Gareth Jones – blooming with the pride of leading Sinfonia Cymru. Bach, Handel and Mozart would have been thrilled – although they may have shown it in different ways!

So how do I describe an hour in their company? I thought about Epstein and his Christ In Glory looking out and over us – the bold decision of a Bishop and his Dean and Chapter in 1950 to recover their cathedral and make her grand again after the destruction of war – and found these words by their architect, George Pace: Mystery should be veiled and vista should open upon vista..seemed to sum it up rather well.