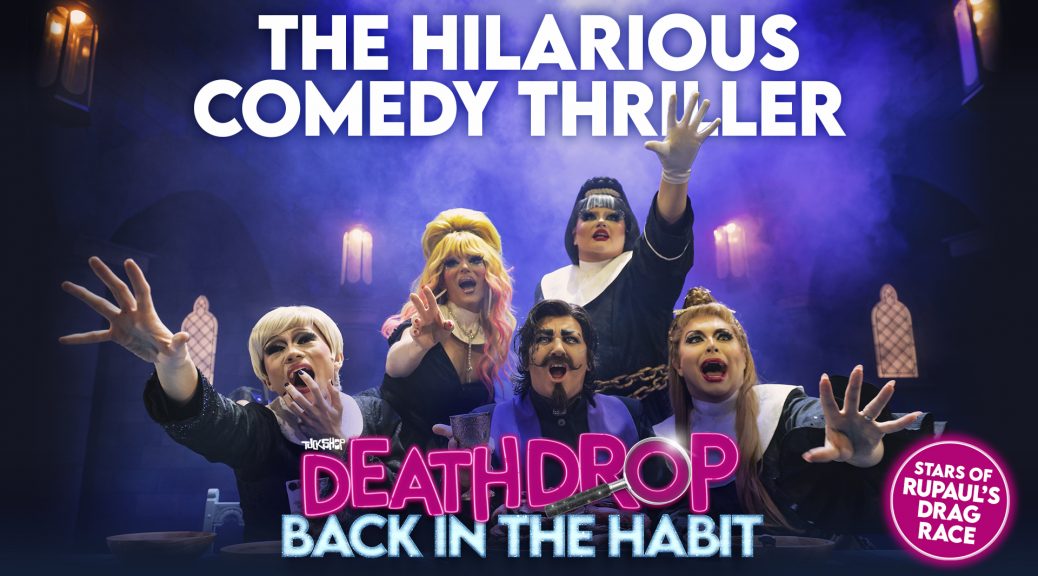 Hallelujah! Following three West End runs and a sold-out UK tour, the original Death Drop took the theatre world by storm by filling the stage with an all-star cast of drag queens and kings. It was easily the filthiest and funniest thing I’d ever seen – and the sequel promised to be even more anarchic, swapping out Dragatha Christie for Dragnus Dei. Produced by TuckShop and Trafalgar Theatre Productions, Death Drop: Back in the Habit centres on a gaggle of glamorous nuns who occupy the remote convent of St Babs. With a gamut of ghostly goings-on, and a potential serial killer slashaying their way through the sisterhood, the Vatican sends Father Alfie Romeo to sleuth out the truth – though he’s no Sis Marple.

Written by Rob Evans and directed once again by Jesse Jones, Back in the Habit is the newest entry in the self-proclaimed Death Drop Cinematic Universe (DDCU), created by Christopher D Clegg. The sequel is blessed with the presence of drag royalty, including two returning stars: RuPaul’s Drag Race US Superstar Willam (the only contestant to be disqualified!) as Sis Titis, and award-winning Drag King LoUis CYfer as Alfie Romeo. They’re joined by a holy trinity of Drag Race UK stars: River Medway as Sister Maria Julieandrews, Cheryl Hole as Sister Mary Berry, and Cardiff-based Victoria Scone (the first cis woman to compete in the franchise’s history) as Mother Superior. Blessed are they who pun in the name of the lord.

The cast are on top form and bring glamour, gags, and gravitas to a script that isn’t quite as tight as the costumes. There’s a lot of camp, comedic potential in Christianity – for further reference, see the Met Gala’s 2018 bash – and its ecclesiastical extravagance is suitably eviscerated here. In true Death Drop fashion, the jinks are high and the brow is low, with no innuendo left unturned. Despite throwing shade at the ‘cheap’ production values, Peter Mackintosh’s set and Rory Beaton’s lighting are extremely effective, especially in the scarier scenes (demonic possession, ghostly apparitions, and a ghoulishly good reprise of Flo and Joan’s ‘Oopsie Whoopsie’).

The characterisations are top-class – but I must make a confession: while the performers are truly doing the Lord’s work, the material they’re given is far from divine. Cheryl Hole’s Sister Mary Berry and Willam’s Sis Titis are brilliantly named and performed, but their comedic potential isn’t mined as much as it could be – Mary Berry isn’t even the resident chef! If we already have Sister Maria Julieandrews, why not have her be joined by other onscreen nuns: can you imagine Willam donning Deborah Kerr’s iconic white wimple from Black Narcissus while Cheryl Hole channels Debbie Reynolds’ guitar-strumming Singing Nun? In recent years we’ve even had Saint Maud, Warrior Nun, and The Conjuring movies – but there’s one obvious omission: to not have a queen take on the role of Whoopi Goldberg’s Sister Mary Clarence here is practically blasphemous, especially as its her film which lends this show its subtitle. Its second-to-none cast, though, is its saving grace.

While it might not be the answer to all your prayers, Death Drop: Back in the Habit is a Joyful, Joyful slay ride that features a heavenly host of drag performers that put the ‘original’ in ‘original sin’. Can I get an Amen?

Death Drop: Back in the Habit is playing at the New Theatre Cardiff from 29 November – 3 December