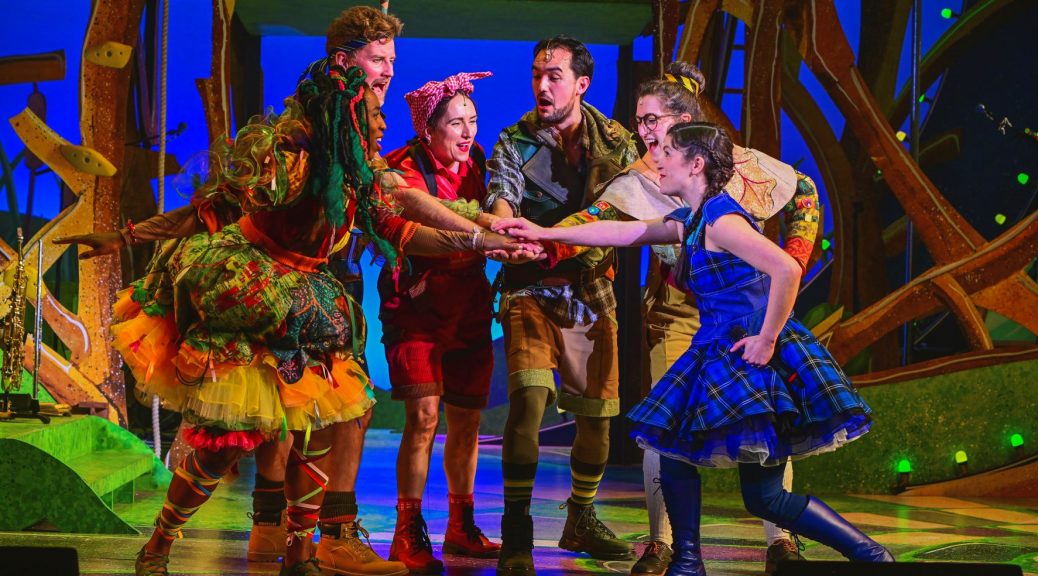 As far as I’m concerned, the festive season doesn’t begin until I’ve been to see Theatr Clwyd’s infamous rock ‘n’ roll pantomime. This year it just happened to be one of my favourites tales-the tale of Robin Hood. Although what would this story be without the heroine, Maid Marian? Or MariOn as we say in Wales!

Upon taking our seats we enter the forest. In front of us, giant trees with tall branches on which hang posters declaring ‘We love Robin Hood’. In the centre, what looks like a tangle of circular green branches, on which is hidden the name of our hero; the ‘o’ in Robin cleverly disguised as a target and arrow which light up. We’ve already been transported to where our story begins, in Flint-sh-sh-shire, as the Sheriff believes it’s pronounced, much to the frustration of his subject, Clod!

Once again, the cast enthrall us with their many talents; sword fighting one moment, next playing the drums for a big musical number, then singing a power ballad full pelt before completing a costume change and dashing to the top of the set to play keyboards without the audience even noticing the transition! Just incredible. And the reason, for me, that Theatr Clwyd’s panto is head and shoulders above the rest!

Let’s just hope that this remains the case once director, Tamara Harvey, leaves her post to take on the role of Co-Artistic Director of the RSC next year!

The action kicks off straight away and it’s not long before the water guns are out, and bubbles are filling the auditorium! As ever, the music choices throughout are unique and punchy. The cast always surprises with songs you wouldn’t necessarily expect to hear in a traditional pantomime. This year we have a Beastie Boys classic, Lizzo’s Good as Hell, and a rip-roaring rendition of what has become the Welsh football team’s unofficial anthem ‘Yma o Hyd’, although this may not feel quite as uplifting now that the team are out of the World Cup!

Phylip Harries’ Dame, Lady Myfanwy of Mold, is right on target (sorry!). His comic timing, interaction with the audience and chemistry with his fellow cast members, particularly the ever-amusing Daniel Lloyd who plays Little John, are all superb, and his transformation into Wonder Woman is something to behold! I’m convinced the creative team dare each other, every panto season, to push the boundaries with the lewd jokes! Always tastefully delivered and appropriate enough to bypass any little ones in the crowd, the adults amongst us were in for a treat! One particular line about a casserole almost made me blush!

As always with a Theatr Clwyd panto, the Welsh language is heard plentifully throughout the production with frequent mentions of local places from Flintshire to Rhyl, Mold to Wrexham as well as greetings from each character often delivered in both English and Welsh. It’s so refreshing to hear real Welsh accents, lots of local references as well as Welsh songs and music underpinning the whole piece.

Stand out moments this year include Celia Cruwys-Finnigan as Maid Marion. Celia is a little pocket- rocket and portrays Marion perfectly: shifting from an underrated, pretty Princess to an awe-inspiring female with attitude. And for such a petite person, she has a huge set of lungs! The costumes also provided plenty of ‘wow’ moments, none more so than King Gruff’s final, and only, costume, which, to the untrained eye, made it look as if his subject (aptly named Drakeford!) was carrying him on his shoulders! Brilliantly funny! Also watch out for the lip sync challenge, a scene in itself, and one which has children and adults alike in fits of laughter

However, the highlight for me, and others I’m sure, is Ben Locke as the Sheriff. Last year, Ben played Barry Island (the ‘Gaston’ character in Beauty and the Beast) and did such a fabulous job at being the villain that he was surely the obvious choice for the Sheriff. Ben seems to have a knack for playing a fantastically evil, handsome yet extremely camp baddie! Every line he delivers is flawless, his physicality is phenomenal and his comic timing perfect. Every facial expression is thought about and he’s clearly just having a wonderful time with this character!

Theatr Clwyd have done it again and brought to life classic tale in a very un-classic way! ‘Oh no, they haven’t!’ ‘Oh yes, they have!’