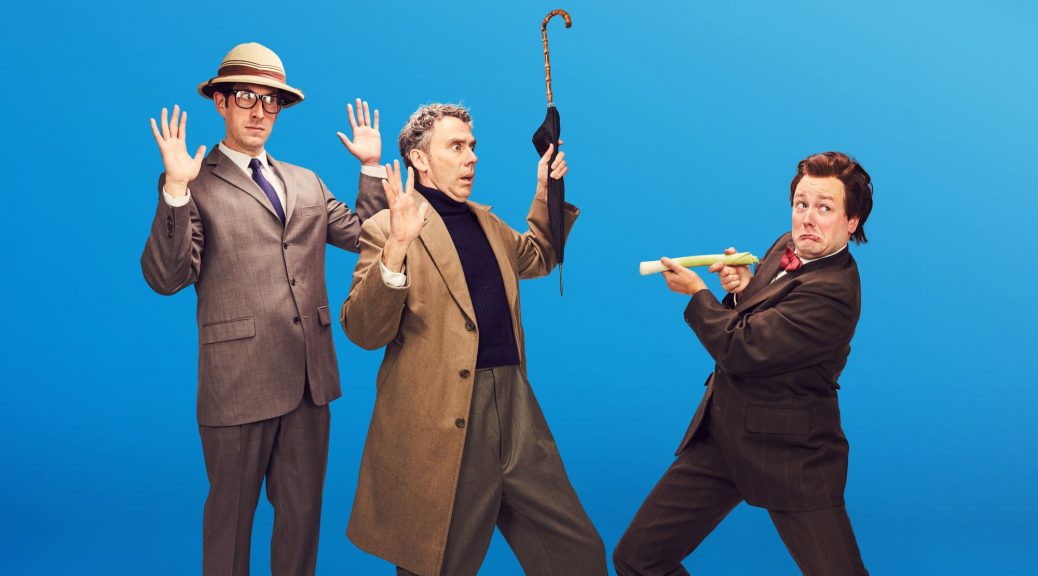 ‘I told you I was ill’: this is the epitaph of one Terence ‘Spike’ Milligan, who holds the rare honour of being able to make people laugh long after shuffling off this mortal coil. Milligan was the man behind The Goons, a satirical radio show broadcast by the BBC between 1951 and 1960. As co-creator, chief writer and one third of the titular trio along with Peter Sellers and Harry Secombe, Milligan took postwar Britain by storm and influenced comedic greats from Monty Python to the Muppets. Premiering at the Watermill in January and now ending its successful UK tour at Cardiff’s New Theatre, Ian Hislop and Nick Newman’s SPIKE celebrates the man behind the madness.

Directed by Watermill AD Paul Hart, SPIKE takes place during the tumultuous making of The Goons, which was just as chaotic and surreal behind the mic as it was in front of it. This trio of working-class lads had a penchant for the surreal and direct line to your funny bone – but, as with anything creative, tempers flared and egos clashed. Robert Wilfort (aka Gavin and Stacey’s Jason – he of the infamous fishing trip) is nothing short of stupendous as Spike, no small feat when considering that the man was a one-off who was always ‘on’. Determined not to play him as a ‘Tears of a Clown’ caricature (for more, check out our interview with Robert here), Wilfort plays Spike as the beleaguered eccentric he was – a loyal friend, a frustrating colleague, and a loving if distant husband. Wilfort captures Spike’s soul in all its anarchic, defiant glory, and has the comic chops to make his iconic quips soar.

He’s supported by a rabble-rousing, gag-tastic cast who collectively had the audience in stitches. While this is Spike’s show through and through, Mischief Theatre alums Patrick Warner and Jeremy Lloyd as Peter Sellers and Wales’ own Harry Secombe, not to mention Ellie Morris as Spike’s first wife June, all have their time to shine. Warner and Lloyd are uncanny as their comic counterparts – and when they share the stage with Wilfort, they nail the Goons’ very particular magic: they’re just three (extra)ordinary people who enjoy making each other laugh. Robert Mountford does a brilliant job as both a haughty BBC Executive and as one third of a toffee-nosed trio of critics, along with James Mack and Margaret Cabourn-Smith (who also plays enthusiastic sound engineer Janet). It’s no surprise that cast and crew have been nominated for multiple Broadway World UK awards.

While the show focuses on a relatively narrow portion of Milligan’s life, it covers a lot of ground, from his service in the Royal Artillery during World War II to his struggles with PTSD and bipolar disorder and the breakdown of his first marriage. Most vividly, it captures his infamous battles with the BBC: you see, the war never really left him, and neither did his rebellious attitude to authority. When he discovered that the Officer Class were to have command over him again, this time as the pen-pushing Heads of Department who nixed anything vaguely novel, Spike took up arms anew.

In the excellent post-show talk (of which the New should do more, if possible), co-writer Newman admitted that the play gave him and Hislop (The Wipers Times) the chance to ‘steal all of Spike’s best jokes’. While the play lacks something of a dramatic through-line, the love for Spike is in every second; there’s a reverence about his irreverence that makes it as moving as it is hilarious. Even Spike’s daughter, Jane Milligan, expressed how much she misses her dad’s ‘anarchy’, and his ability to hold power to account – remember that even the reigning monarch did not escape unscathed from Spike’s cutting wit.

While Peter Sellers went on to great success in movies like The Pink Panther and Dr Strangelove, and Secombe (iconic as Oliver!’s Mr Bumble) went into music, Milligan became a prolific memoirist (Adolf Hitler: My Part in His Downfall), poet, and children’s author – but never reached their flashy heights. His influence, though, is immortal – and SPIKE is, in true Goonish fashion, an eccentric celebration of a man who, even after a lifetime of making the world laugh, was still gone too Goon.

SPIKE concludes its UK tour at the New Theatre Cardiff this week – make sure to catch it between 22 – 26 November before it’s Goon forever! More information on the show and how to book tickets here.