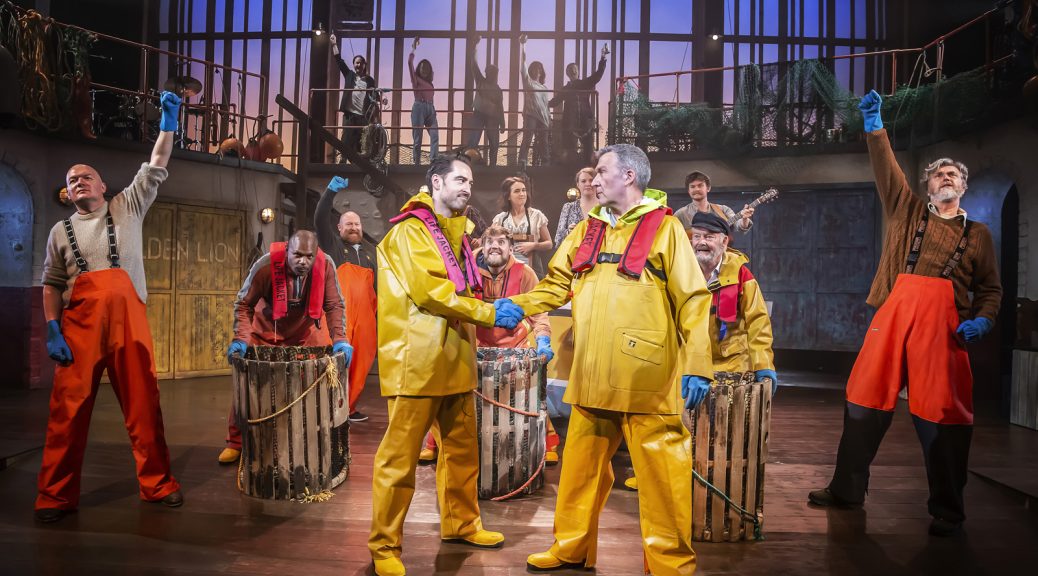 The buoy band that breams were made of! Fisherman’s Friends: The Musical, written by Amanda Whittington and directed by James Grieve, is based on the true ragfish-to-riches story of the best Cornish export since the pasty: an acapella group comprised of local fishermen whose chart-topping rise to fame saw them playing the Pyramid Stage at Glastonbury in 2011. The musical, which draws on the screenplay for the 2019 film starring James Purefoy and Daniel Mays, includes a raft of sea shanties (including lockdown TikTok sensation Wellerman) alongside original songs written for the show by musical director James Findlay. Having premiered in Plymouth in September, the UK tour drops anchor in Cardiff this week.

The story centres around the band’s discovery by Jason Langley’s Danny, a disgraced record producer who wants to use the Fishermen for his comeback, and who ends up falling for them hook, line and sinker. With the team at Island Records sceptical of the band being able to find an audience, Danny lies his way to London with the Fishermen in tow. A classic fish out of water, Langley’s interactions with the Fishermen – and his budding romance with Alywyn (Parisa Shahmir), ‘The Taylor Swift of Port Isaac’ – are hugely entertaining to watch.

This is in no small part due to the energy and enthusiasm of this wonderful cast, who are onstage together for most of the show. Kudos to the actors who play the titular Fishermen: James Gaddas, Robert Duncan, Anton Stephans, John O’Mahony, Hadrian Delacey, Dan Buckley, Dominic Brewer, and the double act of Dakota Starr and Pete Gallagher who won the toughest-fought battle of ‘having the most fun onstage’ I’ve seen in a while. (You can check out our interview with Dakota here). Mind you, everyone onstage (and in the audience) lit up during the scene where the Fishermen hit the Soho club scene – and if you were wondering whether you can disco-ify a sea shanty, then wonder no more.

The team have done an excellent job at translating the story and sense of place to the stage. St Piran’s Day is duly celebrated and Bodmin duly sassed, and Lucy Osborne’s gorgeous set took my breath away when the curtain went up, and the spectacular opening scene – where the Fishermen sing ‘Norman’s Blood’ on a stormy ocean – is something you truly have to see (or ‘sea’?) for yourself. With such a huge cast, the show nails both the raucous group numbers (like the jolly ‘South Australia’ and any scene in the Golden Lion pub) and intimate two-handers (like the first tentative steps of courtship between Langley and Shahmir, where they circle slowly around each other singing ‘Sloop John B’). Meanwhile, Cornish actors like Susan Penhaligon and Robert Duncan bring a sense of mischief, gravitas and authenticity, and Shahmir lends grace and passion to the stage in ‘A Village by the Sea’.

The sense of warmth and affection among the cast is sure to reel you in, as will the top-notch singing – these shanties have never sounded better. While you might struggle to remember every Steinman lyric or Osmonds riff, these call-and-response songs are easy to pick up and sing along to – the pitcher sings a verse, and everyone joins in on the chorus. Shanties originated as working men’s songs, designed to help sailors keep to a strict rhythm during everyday tasks on the ship, and to keep up morale. So if you’re feeling even the teensiest bit down in the dumps, a couple of bars of ‘John Kanaka’, ‘Drunken Sailor’, or ‘Blow the Man Down’ is sure to lift you up.

There really is something for everyone in this show. The songs have a sense of history and humour that make them a rich live experience. As one character says: these songs are for anyone with a heart, a soul, and a taste for adventure. Set sail for Fisherman’s Friends and you’re sure to have a fin-tastic time!

Fisherman’s Friends: The Musical is playing at New Theatre in Cardiff through to 29th October (you can find out more about the production and book tickets here).