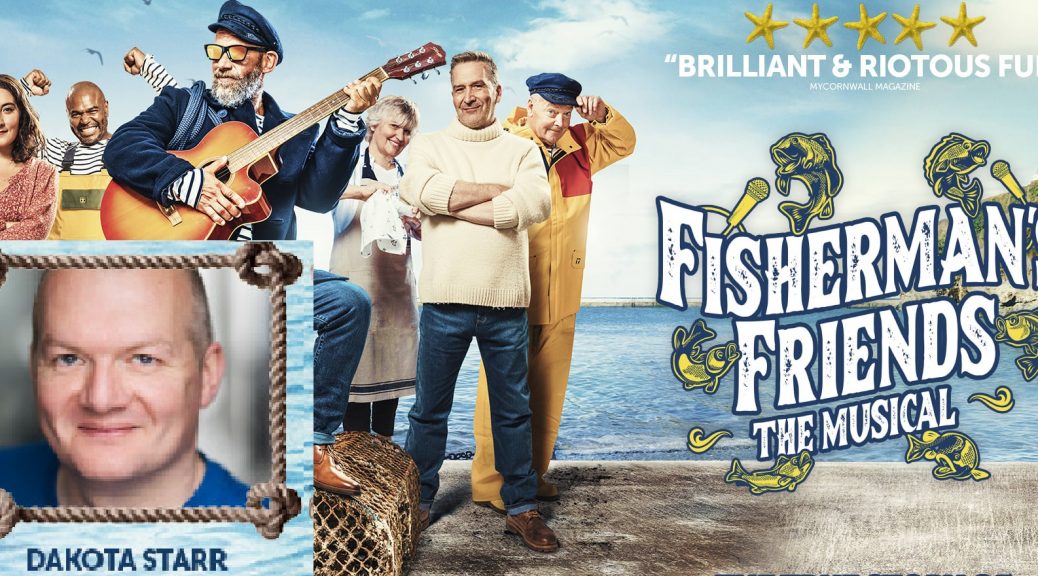 Get the Chance Community Critic Barbara Hughes-Moore speaks with actor and singer Dakota Starr, who is part of the touring cast for Fisherman’s Friends: The Musical. This feel-good new show charts the real-life story of the Cornish ‘Buoy Band’, who went from singing sea shanties in their beloved hometown of Port Isaac to performing on the Pyramid Stage at Glastonbury. The show is playing at the New Theatre Cardiff from 25 – 29 October (you can find out more about the production and book tickets here). Dakota, who plays Ben, one of the titular Fishermen, chats with us about the joy of singing sea shanties onstage, touring with such a tight-knit cast, and why audiences will come out of the theatre with a song in their hearts!

This interview has been edited for clarity.

Thank you so much for speaking with me today, Dakota!

Pleasure! Nice to be here.

Tell us a little bit about Fisherman’s Friends: The Musical.

Well, it’s a new musical based on the true story of the band The Fisherman’s Friends, who are a group of unlikely stars who were fishermen from the Cornish town of Port Isaac. They were discovered quite by accident by a record executive and shot to fame in the early 2010s. This show is a slightly fictionalised although based on reality musical about their rise to stardom and its effect on the community and their families.

What role do you play and how did you get involved?

I play Ben, who is one of the main fishermen. There are nine of us in total in the shanty band and I am one of the main singers, which isn’t something I could have said earlier in my career! Our voices blend together quite beautifully, which is an unexpected bonus. I got involved in the usual way: a couple of rounds of auditions, expecting not to get the job at every step!

So you’re already harmonising together as a team?

Absolutely! I’d say of the nine of us, there are probably 3 or 4 who are West End singers, and the rest of us are actors who can hold a tune. One of the clever things they did during the casting was to find nine individual voices that blend together in their natural ranges quite beautifully. The harmonies stitch together really nicely.

Do you have a favourite sea shanty?

There’s a song called John Kanaka which I’m a big fan of, and which we do a couple of times in the show: first, as part of the hometown concert singing for the local community, and later on the trip to London to meet the record producer for the first time. It’s the soundtrack to the band travelling on their minibus to London to seek fame and fortune. That’s my favourite shanty, but there are songs that have been written specifically for the show which are more like folk songs. One of these is sung by Parisa Shahmir as Alwyn, who’s the female lead of the show, and she has such a sensational voice. It’s a sight to behold.

How does the story translate to the stage?

We have a life-size boat that fills the stage in the introduction and then later on during the song Rattling Winches, where they take the wannabe manager out on the boat to see what he’s made of. It’s a real visceral way of showing the world these men come from and the dangers they face, and the graft they have to put in just to scrape a living as professional lobster fishermen. It’s a sight to behold, quite a spectacle.

How do you bond as a cast behind the scenes, especially on such a big UK tour?

It’s a unique cast as far as I’ve experienced in my career: right from the first day of rehearsals, it’s been an environment of kindness and togetherness. It’s fitting, as we’re in a show that’s based on such a close-knit community whose catchphrase is ‘one and all’, that the only way to survive is to come together as a team and as a community. They’ve managed to cast a group of people who’ve done that in the rehearsal room and then now on the road as well. Touring is always a strange and tiring and stressful journey, but today [for example] we had our day off, so I met up with one of the cast and we went for coffee and went shopping together. It’s a chance to bond with someone that I don’t spend any time with onstage. It’s a lovely cast to work with.

What’s your favourite scene to perform with the cast?

My favourite scenes are the ones that take place in the pub. Their entire community is based around a pub called The Golden Lion, which exists in the real Port Isaac. It’s where the men met and rehearsed and started singing together. It’s the hub and heart and soul of that village. The scenes that take place there are filled with camaraderie and a gentle teasing of each other, and a real feeling of a group of people who know each other so well, and who know each other’s histories so well, that they can laugh and cry and get under each other’s skin and have conflict and resolve that conflict all in one environment. Those things feel like the most community-based for the whole cast.

In the spirit of gentle teasing, who do you feel is most and least like their characters?

Parisa (Shahmir, who plays Alwyn) is the most like her character, because Alwyn is a very strong-minded young lady who knows her own mind and what she wants and what she doesn’t. Even having this romance with a record producer doesn’t tempt her into the world of professional music. She’s a singer-songwriter both in the show and in real life, and she’s given the opportunity in the show to chase a solo career if she wants one, and to see what the music business is like – and decides that she’s happy where she is. She sings and plays and lives in Port Isaac, and that’s where her heart lives, and she doesn’t want to be chewed up and spat out by an industry that has no interest in. parisa has that same strength of character and purpose – she’s very well cast!

I’m going to say Jason Langley, who plays Danny the record exec, is the least like his character. That character is kind-hearted, which Jason shares with him, but he’s a blagger, which Jason doesn’t. the character is very much out for himself at first, but he learns the power of community and the strength of respecting the people around you and the love a community can have for each other, which is alien to him. He’s happy to lie and cheat and get what he wants and fight his way in, which is very un-Jason: Jason is very team-oriented and looking out for everyone else all the time.

What do you want audiences to come out of the theatre feeling after this show?

I would like them to come out of the theatre feeling closer to the people around them, and feeling bonded to the places they come from and the people they know and the people they love. It’s such a story of people supporting each other and lifting each other up, and that we’re all greater than the sum of our parts; that we can all, as a community or as a team, be something quite special. I think, in this current climate, that a sense of community and of working together and helping each other is more essential than ever.

Have you ever performed in Cardiff before, or the New Theatre specifically?

It’ll be my first time performing in Cardiff! We have family friends who live in Cardiff so I can’t wait for them to see me on the big stage for the first time. I’ve visited many times but never performed here, so it’s exciting for me.

We’re very excited to see you perform in Cardiff! I have one last question for you: because the Fisherman’s Friends are known as a buoy band, I want to know: do you have a favourite boy band?

So many good ones to choose from, I know.

There are! I’m taking this question far too seriously.

You can’t be too serious about boy bands, Dakota!

I know! My favourite boy band is an acapella group called The Magnets: one of them is a beat boxers and the rest of the voices go from bass to very high tenor. They do incredible close harmony versions of pop songs that are done a cappella.

How perfect for the Fisherman’s Friends! Thank you so much for your time, Dakota – we can’t wait for the show.

Can’t wait to perform there! Thank you for having me.