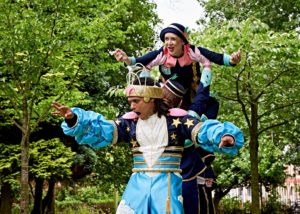 Shakespeare Made Fun!
I will admit that in 2016 I had the privilege of watching The Tempest at the Southbank Globe Theatre. One may argue that this would be the best way to experience Shakespeare and up until a viewing of Taking Flights production, I too was under this impression. However following this production my opinion has somewhat changed. 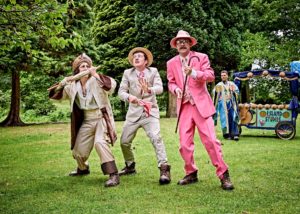 The production broke many of the rules of theatre. Instead of sitting in a darkened theatre, we the audience watched the play outside, toe to toe with the performers. It was also not stationary as we moved around the park to a different setting between each scene. The performers frequently broke the fourth wall and interacted with the audience, giving one the impression that they are intimately involved in the story: you may find yourself getting quite friendly with the characters. This is also aided by the smaller audiences, giving the play an exclusive “Just for You” feel. 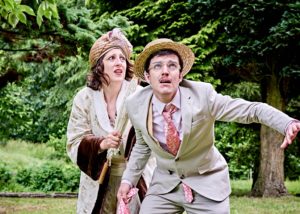 However, having the play performed in this way did cause some minor inconveniences. Having to bring your own chair and then to move it around between each scene may feel a little tedious. Fumbling with an umbrella (for it was raining) was also not brilliant. The quality of the acting along with the quality of the play is enough to distract from these little hiccups, though. And really, isn’t that what we came out to see? 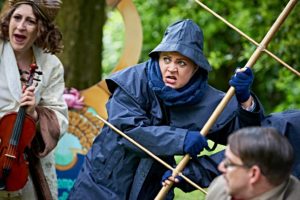 The production has a distinctly surreal 1920s vibe about it, keeping the atmosphere true to the original play. It’s cleverly integrated audio descriptions and sign language allow the world of Shakespeare to be open to the blind and deaf among us, something that is not necessarily offered in conventional performances. Younger audiences, as well as those who are not well acquainted with Shakespeare’s language will also find themselves at an advantage for the more difficult elements of speech are edited just enough to be understood, but carefully enough to retain their beautiful Shakespearian quality. 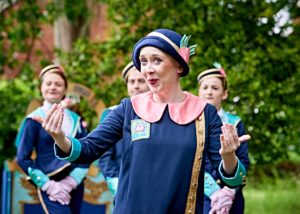 It’s not just the story that’s worth seeing: the musical performances demonstrate the performers’ vocal and instrumental skills with flawless performances in several genres from traditional Baroque to modern Rockabilly. 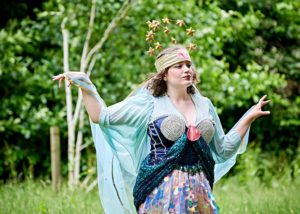 In conclusion this production is an engaging and delightful little show, accessible to all and a lot of fun. It is a perfect blend of traditional Shakespearian humour and modern quirkiness: there is definitely a whiff of ‘Carry On’ in there. Speaking for myself, I found myself smiling and engaged all the way through, as I’m sure did many others.
Ryan Crowley 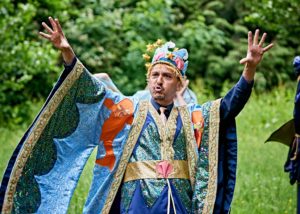 Naturally I did know what to expect but I was very confused by the way the scenes transitioned from normal then into Shakespearean language. The weather was bad and there were midges too!
The sign language was integrated into the production naturally as was the audio description,
I wouldn’t personally recommend this show .
Jennifer Owen 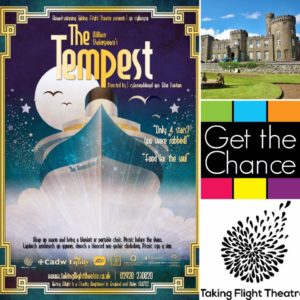 Interested in theatre, dance, visual art, gigs, poetry, film and more?
Want to access a free workshop which will give you an insight into the role of a critic?
Then, this is for you! The workshop and performance will be BSL supported. It will be suitable for D/deaf participants.
All participants will be able to:
-Access the workshop for free and see a performance of The Tempest by Taking Flight Theatre Company
-Be supported by Get the Chance to continue to review a range of events and performances.
The Tempest
“Join the Magic Staff Liner Corporation and indulge yourself with a jaunt on the newest addition to their fleet- their number one luxury ocean liner, The Remembrance. Let their crew take care of your every worry, your every woe on their 10 year anniversary cruise to the Island that Time Forgot.
Expect lots of laughs, physical comedy and live original music, but most of all expect the unexpected.
This performance has live integrated BSL interpretation and audio description.”

What’s involved?
You will take part in a 90 minute workshop with Guy O’Donnell Director of social enterprise and online magazine website Get the Chance getthechance.wales
During the workshop you will be given an insight into the role of the arts critic. You will be given instruction on how to create a review and upload your response online. Participants will look at blogging, video, social media and much more! All workshop participants will get the opportunity for their reviews to feature on the Get the Chance website.
If you have one please bring a laptop, tablet and/or smartphone.
The workshop is limited to 10 places. All participants will be expected to write a response to the performance.
Suitable for ages 14+
The workshop is on July the 11th at Cyfarthfa Museum  from 5-6.30pm
Schedule
5-6.30 pm – Workshop
6.30-7pm -break
7pm -Performance of The Tempest
To book a place please email
getthechance1@gmail.com