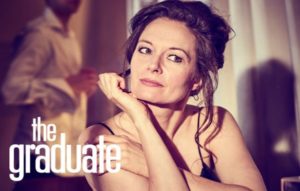 (3 / 5)
The hit West End comedy with its unforgettable characters from the landmark novel and Oscar-winning film are brought to life on the stage of Cardiff’s, New Theatre.
Based on the novel by Charles Webb and the 1968 film, it concerns Mrs Robinson’s played by Catherine McCormack, seduction of young middle class rebel without a cause character Benjamin Braddock, played by Jack Monaghan. Who is struggling to come to terms with his future, worrying that his family expect too much from him, and feels thoroughly disillusioned. However, when seduced by long-term family friend the sensational Mrs Robinson his boredom takes a new direction. And when he has a date with Mrs Robinson’s daughter Elaine, he finally finds some meaning to his life, a meaning that Mrs Robinson opposes!
There is no denying that since it was first written and later immortalised on the big screen the world has drastically changed, which is reflected both in Terry Jonson’s adaptation and Lucy Bailey’s direction of the story for the stage. In no way does it shy away from the prejudices of that time, and in doing so gives the audience a sense of progress that we as a society have made in regards to sexism. Yet at the same time it gives you pause for thought in relation to how little progress we’ve made in some areas too – especially our ability to communicate with those around us. This theme in  the play gives a great sense of amusement and laughter for the audience, especially when touching on the idea of a ‘generation gap’ in scenes between Ben and his Dad. As well as a much-needed sense of relevance, as we now live in a world where such dalliances have become the norm albeit not always outwardly accepted by those around us. Yet the idea that young people see a different future to their parents, but struggle to communicate that future, is still very much relevant albeit not as new as it was in the 60s.
However, to pull off Charles Webb’s original novel, which is a thing of beauty, takes a cast of supreme talent to pull it off. Unfortunately on this occasion, Bailey has failed to assemble such a cast; there was a lack of chemistry between the two leads and the attempt to bring emotional ballast to the piece in the second half by bulking up the role of Mrs Robinson’s daughter, Elaine, played by Emma Curtis. Turned The Graduate from being a dark, funny and beautiful satire of suburbia into a thin story about a kid who feels unsatisfied with his life, chucks his chances away and emerges relatively unscathed at the end.

The stage production of The Graduate  is Terry Johnson’s adaptation of the 1967 screenplay for the film of the same name. The story of the Graduate was written by Charles Webb and was his first novel written at the age of 24. Whilst it is not considered directly autobiographical, Webb’s own life is very much reflected in what he wrote and he has drawn on his own experiences to portray the, what was then, young Benjamin Braddock.
The play, set at the time it was written, gives us an insight into the world of the 1960s up and coming affluent American families and their aspirations for their offspring.
In contrast Benjamin shows us a confused young man who having graduated is unclear of his route ahead. His parents want him to follow a career path that will lead him to a secure future both financially and socially, however, Benjamin does not view this life with such optimism.

On the day of his graduation party he is propositioned by a friend of his parents, Mrs Robinson, a woman clearly bored in an unfulfilled marriage that denied her of a career and life before her life as a mother and housewife began and has an unhealthy relationship with alcohol. Shocked and knowing the close relationship between his parents and the Robinson’s he rejects her. Curious, bored and wanting to experience life Benjamin later begins an illicit affair with Mrs Robinson that lasts the summer. However, he quickly realises that he wants more from life and from a relationship.
Behind the scenes Mr Robinson and Benjamin’s father have been matchmaking and have arranged for him to take the Robinson’s daughter, Elaine, on a date. Disinterested Benjamin takes her to a venue that he is certain she will not like and he isn’t disappointed. Benjamin and Elaine continue to date much to the disapproval of her mother, his former lover, and when Elaine finally returns to college Benjamin announces to his parents that Elaine Robinson is the woman he will marry.

Benjamin then pursues Elaine, declares his love, only to be brought home by his father after the discovery of his affair with Mrs Robinson. As far as his parents are concerned his issues stem from his childhood and as a family they go to see a therapist.
The discovery that Elaine is to marry spurs Benjamin into action and his timely arrival at the church stops the wedding…. does it have a happy ending? Only time will tell but Benjamin and Elaine do end the play by running away together.
In Webb’s life his college romance with Eve Rudd (aka Fred) faced disapproval from her parents and despite numerous barriers put before them it went on to be a lifelong relationship that endured the tests of time and that of family life as they had two sons.
This production was set at the time it was written and had a very retro feel to the set design and the way in which the scenes changed. There were some up-to-date touches with dream sequences being projected as a film in the background which I felt visually worked well.
Jack Monaghan’s portrayal of Benjamin Braddock was very reminiscent of that given by Dustin Hoffman in the 1967 film of The Graduate. His slow American accent accentuated the personality of Benjamin and indeed allowed us to consider his age and thought processing of the situations that he found himself in. Whilst in 2017 a young man of 21 is worldly wise we have to remember that this was certainly not the case in the families of the new up and coming affluent classes of American society of the 1960s.
From the moment Catherine McCormack (Mrs Robinson) sets foot on the stage we see a bored middle aged woman who is desperately trying to cling on to her youth. Her marriage is unfulfilling and she has taken refuge in alcohol a poor excuse, even then, for her behaviour. As the story unfolds we see a woman who has lost control of her family and resents her daughter for having all the advantages she did not but who does not have the personality and enthusiasm for life that she considers young women of the liberated 1960 should have.
All the cast members enhanced the main characters and gave credible performances in their own right. It was a thought provoking and enjoyable production and never before have I seen a bed with so much stage presence and a the ability to move seamlessly between scenes.
The Graduate needs to be viewed in context to its time and place in history. From conversations around me, many of the audience had seen the film and clearly were enjoying this performance, the only thing that was missing was a Greyhound Bus.
The Graduate plays at Cardiff’s New Theatre from;
Tuesday 20 June – Saturday 24 June at 7.30pm
On Wednesday, Thursday and Saturday there are performances at 2.30pm.
For further details about the show or to book tickets call the Box Office on 02920878889.
http://www.newtheatrecardiff.co.uk/what’s-on/the-graduate/