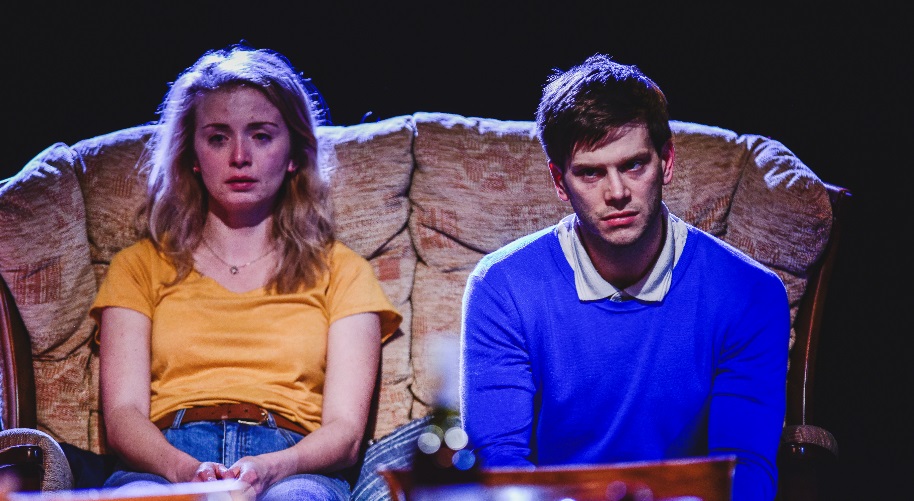 Blue is a powerful drama set by the Welsh, Carmarthenshire coast which centres around the Williams family dinner in the looming absence of a father figure.

The play starts when daughter Elin brings former teacher, Thomas, home to sleep with him. However, to Elin’s surprise her brother is in and her mother home early. A confusion over Thomas’ presence ensues and drives the play forward.

Thomas finds himself awkwardly caught in a family argument under tragic circumstances but is ultimately the trigger for improvement and progress amongst the family.

The writing from Rhys Warrington is brilliant. Meticulously paced and incredibly detailed, the script starts out light-hearted and funny but as it progresses, and delves deeper into the characters, we notice something isn’t normal. At no point does anything feel forced, the play flows naturally and develops with great care.

Blue is subtly political in talking about lack of funding for the NHS. But doesn’t stray from the importance of the characters involved whose lives are being ruined by these cuts.

It’s fair to say, Rhys Warrington is off to a great start with his first feature-length play and I can’t wait to see what he writes next.

The direction from Chelsey Gillard is simply stunning. Every aspect of the script is explored diligently. This play could have been easily mismanaged but Gillard controls it masterfully. Beautifully allowing performers time to draw scenes out and the design elements to set the scene. Chelsey Gillard is forging a name for herself as one of the pioneering directors of contemporary Welsh theatre and her achievement with Bluehas only boosted that claim.

The performances are exceptional from every performer. Sophie Melville is brilliant as Elin. Proving once again what a talent she is, Melville encapsulates the final stages of teenage angst with growing mid-20’s maturity brilliantly.

Gwydion Rhys plays Elin’s shy brother, Huw, expertly. His eyes lighting up the moment Thomas asks about Minecraft. A heart-breaking and simultaneously heart-warming moment as it’s clear this is the first time someone has taken an interest in his interests outside of his online alternate-reality. We can all relate in some way to Huw and Rhys’ portrayal is a testament to this.

Jordan Bernarde’s performance as Thomas is handled with as much care as the character is attentive to the others. We can sense Thomas’ awkwardness and even though we’re aware he’s really there to sleep with Elin, we see his kind-hearted nature too. It’s only when Thomas exits the play that you realise the impact Bernarde’s performance has on the production.

Choosing a standout performance is near-impossible, but if we are to do so, it has to be Nia Roberts in portraying the matriarch figure, Lisa Williams. Everything is perfect from Roberts in this performance. At the mention of her husband, everything about her character changes, from tone to body-language – perfect. This performance will standout as one of the best in Wales this year.

The sound design from Tic Ashfield is very understated and effective. The sound mostly soothes into the background, almost unnoticeable if you’re not looking for it – but is powerful and essential to the production.

Oliver Harman’s design is simple and functional. Detailed to what one would expect any living/dining room to look like, with nothing left to waste. The blue door is, in particular, a nice touch.

Ceri James’ lighting is an essential tool for setting the mood, which James does excellently. Subtly changing throughout and providing a nice alternative to blackouts between scenes which is specifically good. The slight blue tint in some of the lighting is also lovely.

It’s frustrating when a production leaves the design elements as an after-thought and whilst it’s very subtle in Blue, the design, on all fronts, contribute hugely to Blue’s artistic success.

It’s important to stress what a team effort this production is. Huge credit must also go to Rebecca Jade Hammond for creating and producing this piece, as well as all involved at Chippy Lane and Chapter in the making of Blue.

BLUE is a heart-breaking drama about a family split in their grief of a father figure who is both no longer present and not yet absent.