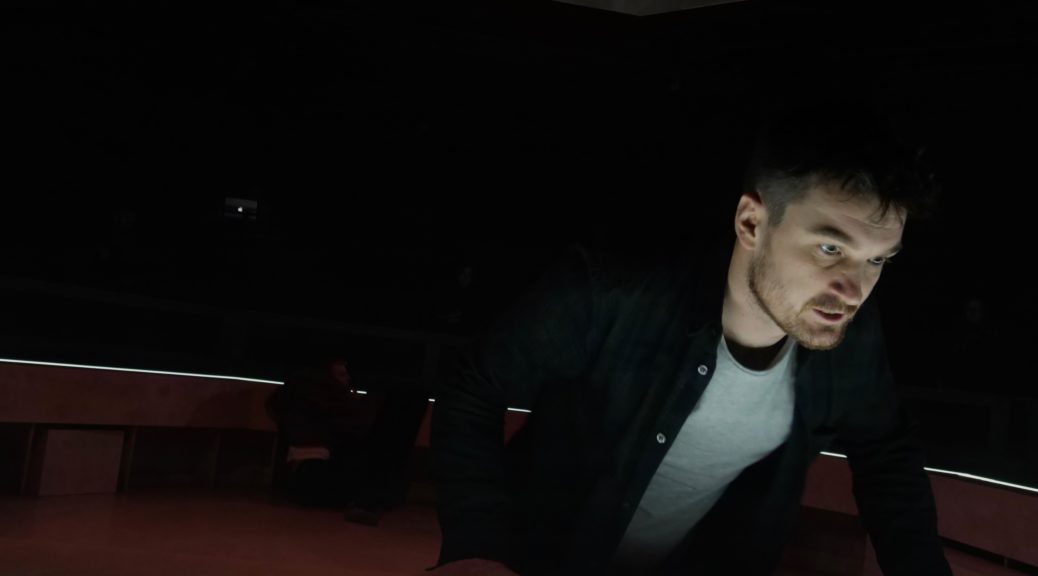 Please note this review contains references to sexual violence and detailed analysis of the productions plot.

WOOF by Elgan Rhys is a new Welsh-language (occasionally bilingual with English subtitles at every performance) play about two men, Daf and Jesse, who have different expectations of one another.

In a lustful first meeting we see the pair’s first sexual encounter and follow their romance along some ups and downs until their final “sexual” encounter and the fallout.

Woof portrays big topics such as open/polyamorous relationships and sexual assault both in the context of modern gay life. However, Elgan Rhys fails to really explore any of these topics in a way that does them justice.

One main reason why is because the characters are cliché “types” of gay men. One wanting marriage and kids, the other wanting an open relationship. But this is the extent of their individuality. Even the way they speak is basically identical and generic.

Because of this, despite the characters having clear goals, the motivations that drive them aren’t clear. For a play that relies so heavily on bubbling under the surface, we should be understanding the motivations.

Rape is used as a “turning point” and feels more like a plot point than a major life event in Jesse or Daf’s life. Things do change after this, but again, the motivations that drive these changes are invisible. Because of this, it doesn’t feel like we’re watching a play, we barely see how they’re feeling and when we do, it mostly comes through speech and feels unnatural.

Things happen, we get spoken to about them, and then the characters move on to the next stage of the plot. It feels like a draft of a script that has figured out its structure, but not found the character’s voices or even the characters themselves.

One positive is that we see real love from both characters to each other, even if they don’t always care for the other.

Elgan Rhys presents a lot in Woof and some people will really identify with it, because of the evocative nature of the topics presented. But it explores very little of these huge themes and how they affect the characters, which is where this play particularly falls down.

The tone of the direction from Gethin Evans doesn’t help solve this. It’s quite flat throughout. The odd scene or moment is well controlled by Evans. But the piece overall feels odd. The subtext isn’t portrayed well throughout the performance at all and the build-up to the rape scene, as well as the scene itself, is really poor because of this.

Whilst neither Aled Pedrick as Jesse or Berwyn Pearce as Daf do particularly badly in portraying what they’re given, neither really rise and meet the task either. There are great moments from both, however.

Jesse’s immediate reaction to being raped is horrifying. The confusion and fear are portrayed well – but this doesn’t hold and the performance of Jesse declines into mediocrity afterwards. Meanwhile, the performance of Daf peaks in more comedic moments – but struggles with the darker ones.

There are moments of good chemistry between the two, particularly in the first third of the play. A scene where the two characters exchange phone numbers is particularly nice. Some real chemistry which is lovely as well as being the first time we see real care and love in the two. But then, there’s a lot that feels unnatural. For example, whenever the characters talk about their relationship – which is the central conflict of the piece.

The set and design from Elin Steele is simple. Nothing out of this world but it works. It’s a similar story for Katy Morison’s lighting design too. Some moments that are good, the club scene in particular, but ultimately underused.

The sound by Sam Jones doesn’t have a huge impact on the overall production. An announcement of “Happy New Year!” on the sound system doesn’t fit the tone and music isn’t exploited nearly enough.

The design elements really could set the tone for the piece but instead, as happens too often, feel like an afterthought.

Now that we have critically assessed the play itself, there are some other things that desperately need to be addressed.

Firstly, the lack of trigger warnings was a huge issue. “Sexual content” does not equal “rape/sexual violence”. This desperately needs addressing by the Sherman in the remaining shows as this was incredibly irresponsible.

The tone on the night and marketing is out of place with the nature of the piece. Having feedback boards outside with various LGBTQ+ flags on it, was a strange contrast from portraying a toxic gay relationship and gay rape. Marketing it with the words “bold” and “gritty” are also out of place with what we see. This isn’t a bold play because it doesn’t challenge its audience.

It seems that from start to finish, the whole theatre had the wrong attitude with this play, from top to bottom. From commissioning, to presenting, to marketing and warning its audience about the issues it deals with. It’s a presentation of something that may well be true, but not an exploration of the themes or characters.

There will be people who really enjoy Woof and it is worth seeing, in full knowledge of what it’s about.

WOOF is a dark portrayal of a toxic, yet loving relationship, between two male characters who are ultimately underdeveloped.