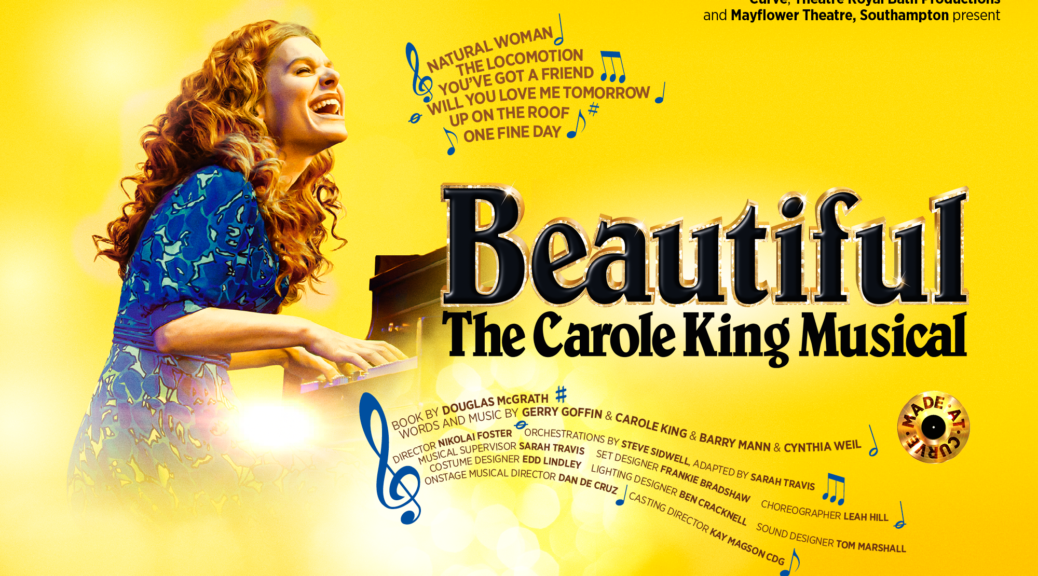 What can audiences expect when they come see the show?
Molly-Grace: It’s done by a full company of live musicians, which is very different to the original Broadway and West End productions and previous tours. It’s a really feel-good musical. It’s emotional and very heartwarming, to say the least.

Seren: There’s a lot of energy on stage and audiences are excited and happy to be back in the theatre. The music is infectious, we’re all so passionate about what we’re doing and everyone leaves with a smile on their faces and the tunes going round in their heads.

Jos: It’s like a gig within a play – lots of songs that people will recognise and lots of songs they maybe didn’t know were written by Carole King or Barry Mann and Cynthia Weil. They’re in for some laughs and some drama, and there’s something for everyone from ballads and rock songs to old-style show tunes.

Tom: There’s not a thing that any of our cast members don’t do. It’s full-on because we’re acting, singing, dancing and playing the music so the audience certainly gets its money’s worth.

Molly-Grace, how would you describe Carole King as a character? And do you feel any pressure about bringing her to life on stage?
Molly-Grace: She’s an incredible music icon. She’s very driven and very determined, and you get to see how resilient she is as her story goes on. As for feeling the pressure, yes there’s a lot of that – especially given that she’s still to this day a living legend. But I’m very happy that I’m getting to play her and her music. The big challenge is in playing someone who is still around, so people will inevitably compare you to her as well as other people who have played the role before. It’s about doing your own thing whilst also paying respect to the people before along with Carole herself.

Tom, Seren and Jos, who do you play and how do they feature in Carole’s story?
Tom: Gerry Goffin is her first husband and songwriting partner. In the show he’s quite chaotic, he’s always striving for more and he eventually suffers a massive breakdown.

Seren: Cynthia Weil is part of a songwriting team with Barry Mann whose paths cross with Carole and Gerry during the Brill Building era in the 60s. As a character she’s ahead of her time. She doesn’t conform and she’s very prescient, plus she’s very funny and having a female comic character to play is an absolute gift.

Jos: Barry, as Seren says, is Cynthia’s songwriter partner as well as her husband. He’s very sharp with a lot of that Jewish humour; think Larry David and Jerry Seinfeld because he has that kind of rhythm to him. He’s a humorous hypochondriac.

Were there things you were intrigued to learn about your characters?
Molly-King: [Laughs] That she married many times after Gerry Goffin. I also learned she was incredibly resilient and let nothing stand in the way of her success. She wrote from the heart, and that’s evident in every song she’s ever written. They’re very emotional.

Tom: I’d heard of Goffin and King’s music but I didn’t realise how much they wrote and how much they did for the industry. I also didn’t know about him as a person. He was always chasing happiness and the next big thing, which set him on a downward spiral.

Seren: I knew all the Mann and Weil songs but I didn’t know about the people who wrote them. I was intrigued by how Cynthia grew up in a conservative Jewish family but went against the grain of having that traditional life.

Jos: I knew a load of their songs but I didn’t know who wrote them. When I was a kid I had this talking dog toy and when you pressed its paw it would play Who Put The Bomp. I remember asking my dad ‘Who wrote that song?’ and he told me Barry Mann. But that’s all I knew about him. I didn’t know he’d also co-written On Broadway and You’ve Lost That Lovin’ Feeling among many others.

There are so many great numbers in the show. Do you have any favourites to perform?
Molly-Grace: I’d have to say (You Make Me Feel Like) A Natural Woman because it’s such an honest, emotional song about her relationship with Gerry.

Seren: That song is very special because it has such an impact on the audience. I also love the rockier numbers and It’s Too Late, which has a jazzier feel. There are so many good songs, it’s hard to choose between them.

Jos: I play the guitar on It’s Too Late and it’s got a great groove to it. [Laughs] It’s my jam, as the kids say, and Molly-Grace sings and plays it wonderfully.

Tom: There’s a song I do with the cast called Pleasant Valley Sunday and it’s a great rocking, uptempo song.

As an actor and musician, it must be great getting to bring all your skills to the table?
Molly-Grace: Absolutely. We’re very lucky that we have such a talented cast of actors and musicians who create this amazing sound. Being an actor-musician is what I trained to do but I think these kind of productions are still pretty new for the theatre industry.

Tom: I love music and acting so getting to scratch both itches with this show is brilliant. I’ve done regular acting roles, especially on TV, that I’ve loved but it’s so creatively fulfilling getting to do a bit of everything.

Seren: Having actor-musicians play the parts works so well for this show because it has music at its core. When you have a story like Beautiful that’s all about music and musicianship, it takes it to a whole new level.

Jos: It’s always fun because I get to combine my two great loves, namely acting and playing music. Are there enough shows that offer the chance to do both? [Laughs] I’ll say no because I want to get more work!

Beautiful aside, what have been your other favourite theatre roles?
Seren: I was in Brassed Off in 2015 and that was such an amazing job. The majority of us had a connection with mining through our families and we still keep in touch. Then I did a tour of Crazy For You which was great fun, getting to perform all those wonderful Gershwin tunes.

Molly-Grace: My first-ever job I did after finishing my training was a punk rock show called Oxy & the Morons and doing that straight out of drama school was very cathartic. I did a panto of Beauty and the Beast, I did Priscilla Queen of the Desert and I did a show called Girls Don’t Play Guitars and it was incredible playing a lead guitarist in a 60s rock-and-roll band.

Tom: My first-ever stage role was in a George Styles and Anthony Drewe musical called Soho Cinders and they were the first people to give me a leg up the musical theatre ladder because I was more of a TV boy. That was a real learning curve. Then recently I was in American Idiot and being able to sing Green Day songs for a year was great.

Jos: I was in Once, where I was a Czech burger joint manager and which I got to play bass, ukulele, banjo and mandolin. Then I was in the Theatre Royal Bath production of Bad Jews, which I loved because it’s such a great play.

What are you most enjoying about taking Beautiful around the country? And how do you hope people will feel when they leave the theatre?
Molly-Grace: It’s about getting to share some incredible music with people as well as getting to share Carole’s story. A lot of people don’t know enough about her so it’s nice to show what she went through and how much she’s achieved.

Tom: It’s the kind of show everyone needs right now. We’ve all been through the pandemic and hard times and this show has such a feel-good factor. When we do the finale everyone is dancing, singing, clapping and smiling. For us to take it round the country and bring people so much joy is just amazing.

Jos: When we play the finale you can’t help but feel uplifted. Carole had a bit of a rough life but the music she produced was so wonderful that people will be skipping out of the theatre.

Seren: I hope they’ll be happy to be back in the theatre and that they feel excited and exuberant, and that they’ve made a connection during a time that’s been so hard for everyone. I just hope they feel the joy of this truly joyous show.

Beautiful: The Carole King Musical is playing at the New Theatre Cardiff from 24 – 28 May 2022