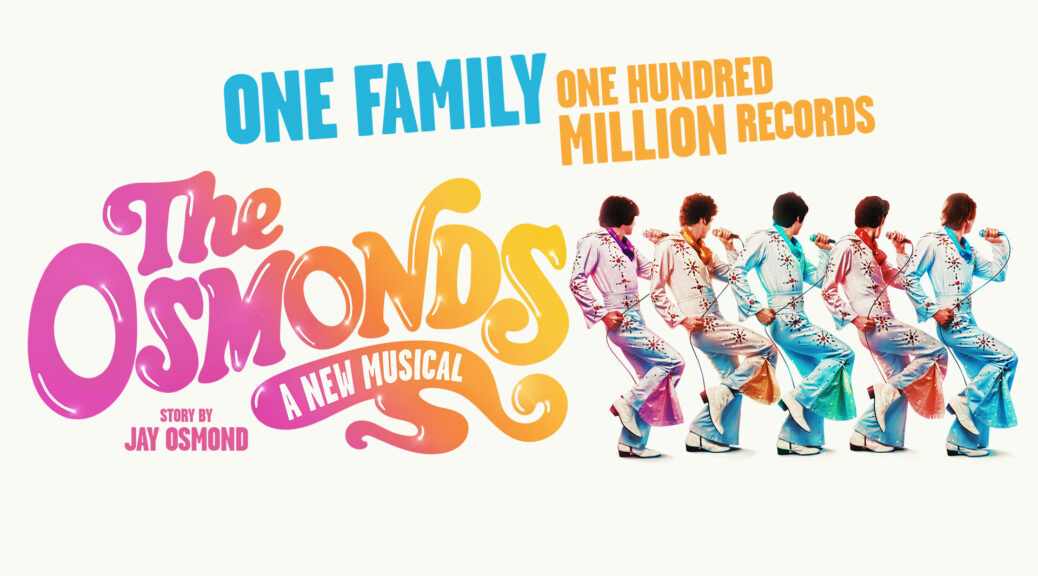 What follows is Vicky Edwards’ syndicated interview with Jay Osmond.

Jay Talking
They say you should never meet your heroes, but seriously? I mean, asking a 70s kid to interview an ACTUAL Osmond? The guy who sang Crazy Horses?  WILD horses wouldn’t have stopped me.

Any fears about heroes having feet of clay prove unfounded. Jay Osmond is lovely.  Meeting me to chat about the World premiere of The Osmonds: a New Musical, I’m curious about the show he calls a ‘living memoir.’

“I wrote this book called Stages about my life. It turned into more of a travelogue, so I always wanted to do a backstage version that included not only the good times, but the bad and sad times too,” he explains.

A friend and producer of Jay’s had an idea. “He said ‘why don’t you write a living memoir and put it on stage?’ And I thought ‘Exactly!’ I have always loved the stage – for me it was one last frontier to conquer.

“I wrote it from the heart. It was hard; I had to play my drums a lot to get my emotions out, but it all boiled down to this: why did we do what we did? It was because we wanted to help people; to use those talents to do some good in the world. I wanted to put that purpose into the show. I think you can do almost anything in life if you have a purpose.”

And you’d need a sense of purpose to get 30+ songs and Jay’s story into a two-hour production.

“It was a challenge,” he admits. “It’s about the four brothers who were at the start. I was one of them. The story starts at the 50th anniversary and then goes way back. Each of us has a different perspective, so this is very much my perspective; hard times, fun times, why we did what we did and how we did it as a family.”

The result is a show that, by all accounts, has broad appeal. Great music and a great story, in which Jay pulls back the curtain to reveal the real family behind all these hits – parents George and Olive Osmond and their nine children; it taps into something richer and is a show that will speak to everyone.

Shrugging modestly, Jay concedes only that “Our music really is multi-generational.”

He’s more effusive, however, about the show’s creative team, praising them and recalling the moment during the workshopping process when he realised that they had created something special.

“To see people laugh, cry and sing along – I knew then that it would work. We have been so blessed with the talented people involved.”

Jay started his barbershop quartet with Brothers Alan, Wayne and Merrill. They had no idea they would go on to become one of the most famous groups in history. Singing initially to fund hearing aids for their two older brothers, Virl & Tom, they were discovered by Walt Disney in 1961. Mentored by Walt, they were invited to appear on The Andy Williams show, achieving global fame. Adding brother Donny to the group, international tours and high profile TV appearances followed. Selling millions of records worldwide, earning dozens of awards and more than fifty gold and platinum records, The Osmonds remain pop royalty.

And even though he was voted one of the top 10 drummers in the country during the 1970s, co-wrote many of The Osmonds’ hit records and choreographed their shows – as well as being an accomplished TV producer – Jay brushes off his achievements. And again, the modesty is authentic. Our Jay is not a man who puts on an ‘interview’ persona. The kindness and warmth is sincere – and never more so than when he talks about the fans.

“We call them friends, not fans,” he corrects me gently, “and we hear them when they tell us that our music helped them at difficult times in their lives.”

Their ‘friends’, it transpires, were a big part of the decision to premiere the show in the UK.

“This is where our family was so welcomed. Osmond-mania kind of happened everywhere, but there was something about the UK; our family was so accepted and so loved here. We have been to almost every place on the tour list at some point and they are places that hold so many memories. We’ll go to Canada and America too, sure, but it feels right to begin here.”

It also feels like the perfect show for a world emerging from the misery of the pandemic.

“I think it really is,” he says, smiling. “I want it to be a celebration of helping people out. I want people to walk out of the theatre feeling lifted and excited about life; to feel joy. That’s my goal. I am humbled by the fact that we have been blessed with people who have loved our music and that we might have played a small part in their lives when they have faced challenges. I want them to know how much they have helped me and my family. They are part of The Osmonds. It will feel like a high school reunion when they come to the show!”

Or as one ‘friend’ said to Jay recently: “This is not just your story; it’s ours too.”

And that’s something he’s very respectful of. But then respect has always been important to The Osmonds.

“It’s a really big part of our belief system and of our perception. We had talent, but we didn’t do what we did to be famous or to make money; we did it to serve people. When we collected our People’s Choice Award, immediately after, Mom and Dad reminded us to do our chores. Our parents always reminded us what was important: Do what is right and the consequences follow. We have had to make a lot of choices along the way, but it’s been a great journey.”

Ah, but it’s not over yet, Jay. Next stop the show. And it looks set to be a spectacular jaunt down Osmond memory lane.

What’s your favourite Osmonds song and why?

Love me for a Reason. Because ‘let the reason be love’ is a message that is so powerful. But Crazy Horses would be my next choice.

You did karate as a young man. Still doing the fancy kicks?

No, not nowadays. But I keep fit. I’m a walker – I love to walk. And I love football. I’m also doing the Pure Trim diet at the moment. It’s organic and very pure and I have lost 30lb in the last 6 months.

We had so many clothes thrown at us in the 70s that we didn’t need to hand down. But when I look back at some of the things we wore – wow! But hey, it was the 70s and we all wore crazy stuff. I can’t wait for people to see the costumes in this show!

What’s your most memorable moment of being in The Osmonds?

So many, but one that stands out is the night we went to watch Led Zeppelin in concert. We were introduced to the guys and they were just the nicest people! Robert Plant asked us to join them on stage for Stairway to Heaven. We weren’t sure that their audience would appreciate us, but eventually we said OK. Robert introduced us as his brand new friends. I played percussion and conga. It was incredible!

What is your philosophy for life?

Go about life and do good. Because when you do good, you feel good. And have a purpose. Be a light to others. To me, that’s the goal in life. It’s the key.

How do you want people to be feeling when they have seen your show?

I want people to walk out of the theatre feeling lifted and excited about life; to feel joy. That’s my goal.

The Osmonds: A New Musical is playing at the New Theatre Cardiff from Tue 4 October – Sat 8 October