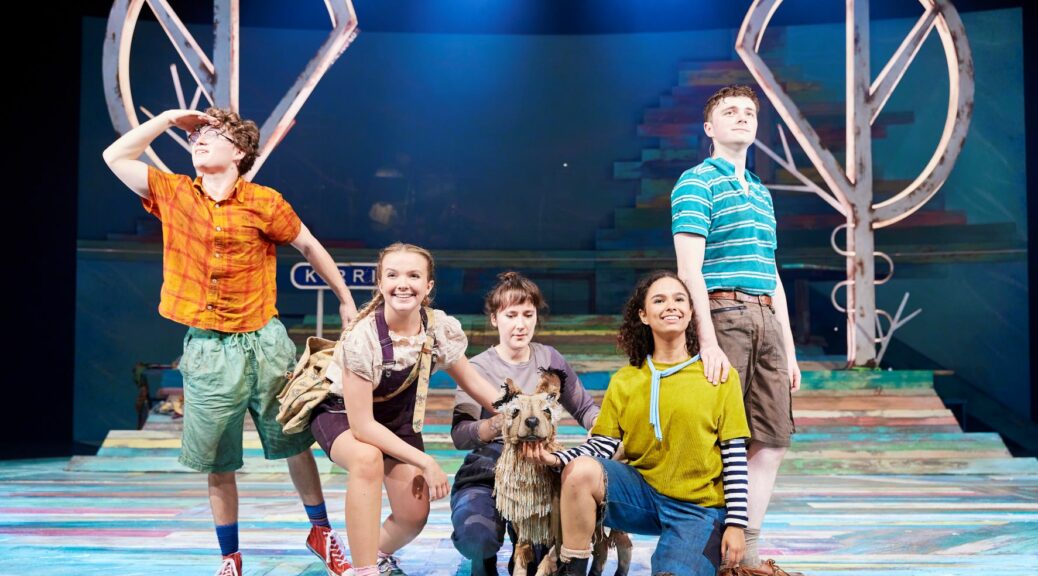 You would be forgiven for feeling a little put out that Tamara Harvey, Artistic Director at Theatr Clwyd is moving on to pastures new, and not just any old pastures but the lush, green pastures of the Royal Shakespeare Company, for one of her last directorial projects here at Theatr Clwyd, is an absolute triumph! No amount of jam sandwiches or ginger beer could have crafted a more nostalgic atmosphere than the one produced by the cast and creatives of The Famous Five, A New Musical. In conjunction with Chichester Festival Theatre, which this year celebrates its 60th anniversary, this exciting new musical is full of wonderful characterisation, whimsical songs, and clever nods to our modern world. A world which Enid Blyton, author of the wonderful Famous Five book series, never experienced, having been born before the turn of the 20th century and passing away in 1968. And yet, there are moments in the production where we realise, she was more ahead of her time than we originally thought; unearthing topics such as gender insecurity, anxiety, and bullying.

The set, designed by award-winning costume and set designer Lucy Osborne, transports the audience from onboard a train, at the beach, to Quentin’s lab and beyond. On arrival into the auditorium the set is laid out like a map of Kirrin with a miniature castle, cottage, tents, and trees and for those familiar with the books, we find ourselves pointing out locations and names we recognise from rainy days spent reading Blyton’s classics! Like a patchwork picnic blanket, there is feeling of the design being slightly ‘mended;’ a table is a piece of wood which has washed up on the beach, a rabbit is made from a potato sack and the goats are old suitcases with heads, legs, and a tail! Much like the Famous Five gang themselves, seemingly thrown together in a slight bungle but a total success all the same!

The story of this new musical is in keeping with the framework and foundations of the Famous Five book series but original in its plot and even acknowledges current environmental and climate change issues, yet it doesn’t shy away from the vintage feeling of Enid Blyton. There’s even a song dedicated to Aunt Fanny’s infamous picnic, performed wonderfully by Lara Denning, with a dash of Waitress about it! The music is punchy and the lyrics wordy and relevant to each character, giving us a taste of their personalities, flaws, and all. There are some beautiful harmonies created throughout the ensemble numbers and some stunning individual vocals from all performers. The piece is cast perfectly, and each has their moment to shine (in the case of Sam Harrison, several memorable personalities to boot!) Mention must also go to the Musicians of Kirrin, who were costumed to fit in with the rest of the cast and often played whilst moving around the stage, and to the band, who were just visible through the backcloth, a nice touch.

Scene-stealer extraordinaire has to go to Timmy the dog! Cleverly designed and directed by Rachael Canning and performed by Ailsa Dalling, it was a challenge not to have a constant eye on Timmy, despite the adventuresome action going on elsewhere! The use of puppetry throughout was awe-inspiring, from the sack rabbits to the suitcase goats and the birds and bats, but Timmy the dog really was something special. Everything from the barking, yelping, tail wagging, panting, running, and pouncing took the audience under its spell and had us believe we were seeing a real dog on stage. When Timmy is captured and placed in a cage, we feel emotion for this material creation!

This production has everything: sentimentality, uplifting songs, emotion, comedy and much more. This was a flawless musical, everything in its place, with a simple message and a boundless energy which would please theatregoers of all ages, whether they’d read an Enid Blyton adventure or not!

The Famous Five, A New Musical completes its run at Theatr Clwyd on October 15th and will then move to the Chichester Theatre Festival and will run from October 21st until November 12th.