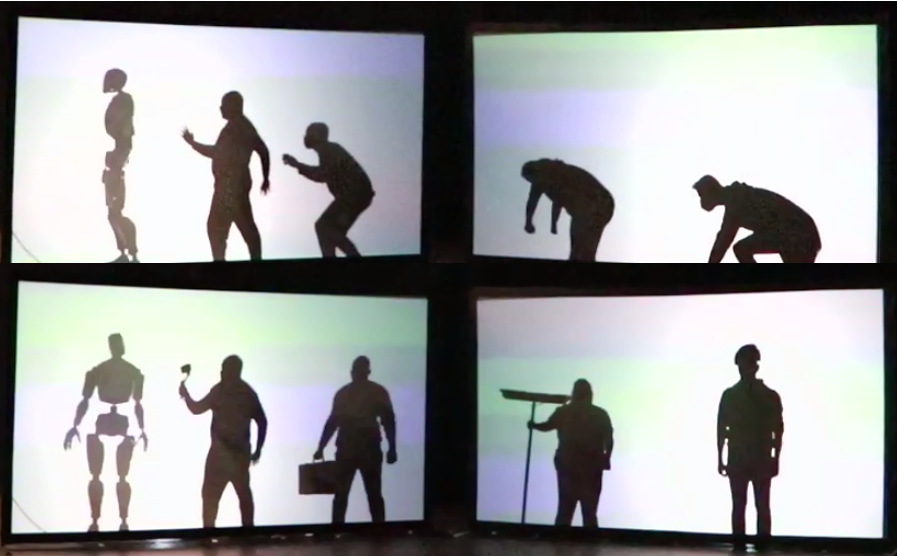 The award-winning Hijinx, one of Europe’s leading inclusive theatre companies, is always pushing the envelope on what ‘theatre’ is and what it can be. the_crash.test – in partnership with Wales Millennium Centre, Pontio and Theatr Ffwrnes – is Hijinx’s latest experiment in ‘hybrid theatre’, fusing performance and technology in an immersive experience like no other. Branded as a Frankenstein for the tech age, the show explores the responsibility we have as humans: to each other and to the things we create.

Directed by Hijinx’s AD Ben Pettitt-Wade, the_crash.test asks you to imagine a world in which your digital self could live for you (think the Bruce Willis movie Surrogates, only better). This is the promise of tech start-up Figital, led by preening CEO Michel LeCoq (Benjamin Victor), who zooms in from a wellness retreat in Bali to put the finishing touches on the ‘Fing-a-me-Bob’, or ‘Bob’ for short: a digital crash test dummy whose burgeoning sentience is about to throw a serious spanner in the works for world domination.

The show itself is a marvel of creativity and collaboration, devised and driven by a cast of performers on stage and via video link. The space is filled with two huge screens onto which is projected everything from a tropical paradise to a molecular wonderland, underscored by Tic Ashfield’s evocatively unnerving soundscape. The motion capture puppetry for ‘Bob’ is especially impressive, and Owen Pugh and Lucy Green, who alternate the role, really bring the character to life. Pugh carries much of the drama as both ‘himself’ and as ‘Bob’. Green is also hilarious as one of Figital’s increasingly concerned shareholders, zooming in alongside Richard Newnham (be-wigged, bothered and bewildered – to fantastic effect) and Lindsay Foster as the feather boa-ed investor riotously reaching the end of her tether.

Benjamin Victor conducts the show with a skittish charm, joyfully skewering the Elon Musks and Mark Zuckerbergs of the world. Bethany Freeman steals scenes as the beleaguered cleaner Betty, whose interactions with Bob are genuinely moving. Meanwhile, Matthew Mullins is responsible for some uproarious moments as the cameraman watching everything slowly devolve into chaos. In a time when zoom call ‘comedy’ has become rote, Hijinx have found a way of making it feel fresh, new and funny – and when they go dark, they don’t pull any punches.

While the ending is genuinely spectacular, the show can be a little uneven at times, and the meta-narrative doesn’t quite pay off – but it is always dynamic, clever, and darkly funny, and whenever the focus is on ‘Bob’ and their increasing sentience, it really soars. Bob’s creators aren’t sure what he’s ‘for’ – but what are any of us ‘for’, at the end of the day? That sort of capitalistic thinking gets very dehumanising very fast: if all of us have worth based on what we can offer, then what does it truly mean to be ‘human’?

The interactive parts of this show are a lot of fun and it’s exhilarating to be able to explore ethical dilemmas alongside the characters. The audience can join in-person or online, and whichever you choose, do bring your mobile phone with you if you can as you’ll be asked to vote on certain moments, starting with ‘what colour should Bob be?’ and escalating to high-stakes questions of mor(t)ality. It might even be worth exploring asking the audience to ‘justify’ their ethical decisions.

The level of talent and creativity on display is staggering. the_crash.test is playing at the Millennium again tonight, and there are plenty of chances to see it again: at the Millennium on 24 June, Pontio Bangor on 29 June and Ffwrnes Llanelli on 2 July (all as part of Hijinx’s Unity festival). Innovative, imaginative and totally immersive, the_crash.test is bonkers in the best way and something you simply have to experience for yourself.

the_crash.test is playing 13 and 14 May 2022 in the Weston Studio, Wales Millennium Centre and throughout June and July in Llanelli, Bangor and Cardiff. All performances are live-captioned and the 14 May performance will have BSL and audio description.