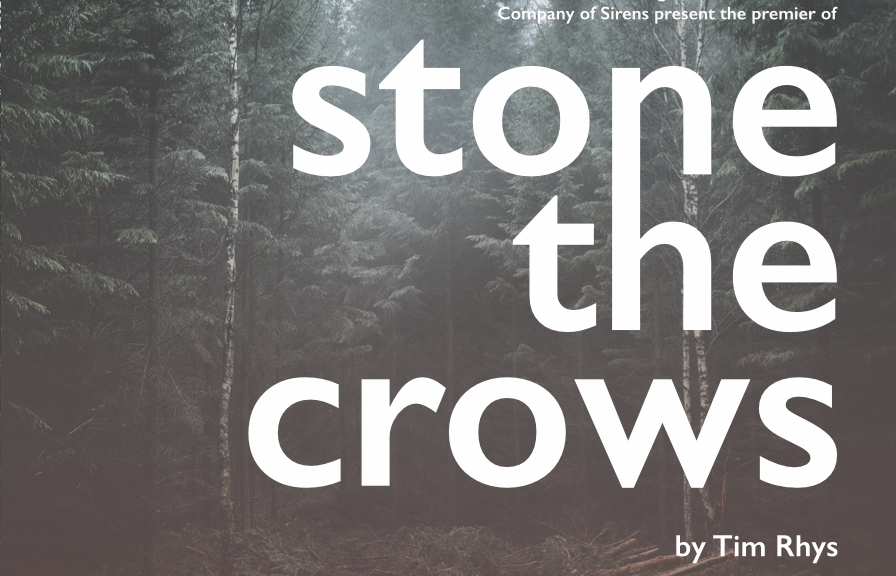 *Trigger warning: the play contains discriminatory slurs directed towards the GRT community, and some distressing scenes*

Stone the Crows has had a fascinating journey to Chapter’s Seligman Theatre. Written by acclaimed playwright Tim Rhys, it debuted as a film starring Terence Stamp and Nick Moran and has now finally made its way to the medium for which it was conceived, in a breathlessly bold new production by Winterlight in association with Company of Sirens.

Tucker (Oliver Morgan-Thomas) is a jaded urbanite who longs to escape the choking grip of city life, so he snaps up a ramshackle farm on the suburbs. While Tucker clings to the dream of peace, what he really wants is uncontested dominance – but this brash new king has a challenger to the throne: Crow (Boo Golding), a mysterious loner who worships the forest and is prepared to do whatever it takes to defend it.

Directed with kinetic intensity by Chris Durnall, Stone the Crows is the transcendent culmination of everything Company of Sirens has worked to achieve. This is a play about borders: between people, between identities, between the urban and the rural, and between those who respect the land and those who gut it for profit. Even its setting transcends categories or definitions: Rhys terms it a ‘social jungle’, a liminal space in which the tangible and the psychological blur together.

And Golding’s Crow is a character who embodies liminality. They exist free of binaries, expectations, demands. They adore the forest with an anchorite’s zeal, and spend the play’s first few minutes meticulously constructing a skeletal altar from twigs and branches in the manner of an ancient ritual. While Golding is mercurial as the wind, Morgan-Thomas is all iron and grit, hard as the city that built him; there’s a simmering machismo to his performance which suggests that rage, fed and informed by white supremacy, is never far from the surface.

Tucker’s particular evil can be seen in the awful, racialized abuse he directs at the Travellers who live and work on ‘his’ land. The title itself evokes a racial slur against Roma people (specifically the Romani communities of Eastern Europe). While it’s unclear to what extent GRT people were consulted in the making of the play, the creative team’s intentions are firmly in solidarity with these marginalised communities (and very firmly against despotic legislation currently making its way through Parliament), and Rhys and Golding depict the main character with empathy, nuance and complexity.

The visceral connection between its two central performers is the axis on which the story turns. While Golding shifts effortlessly between Puck-like trickster and vengeful spirit, Morgan Thomas’ laddish certitude grows increasingly sinister as the action unfurls. They mimic, complete, and predict each other; there’s a dynamism to their exchanges that, even when they don’t interact directly, renders their connection immediate and undeniable. It also means that when their characters do finally ‘meet’, it’s breathtaking.

Nature, though, is the master here, captured by Eren Anderson’s exquisite music. His soundscape beautifully weaves the gently unspooling song of the forest. He plays, at first, only when we are in Crow’s perspective, as if the primal music of the spheres flows only through them, and not Tucker. All we hear when Tucker speaks is the snap of a twig underfoot and the susurrus of rustling leaves. But then, when allegiances and sympathies start to shift, their melodies intertwine like roots.

Hypnotic and engrossing, Stone the Crows is a masterpiece of gorgeous brutality. The play leaves us at a threshold, and you must decide whether to turn back or to cross into the unknown.