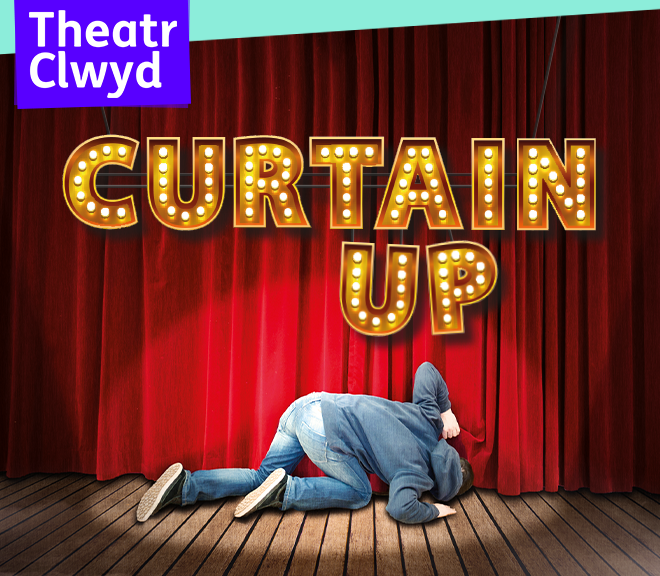 Curtain Up is a celebration of creativity, live theatre, and Welsh talent.

Over the course of three weeks, three companies, comprising of ten actors each, will perform 15 new plays – five each week – by 15 Welsh playwrights. That’s 15 voices with 15 very different stories to tell.

Associate Director Francesca Goodridge took some time out of her busy schedule preparing for week one to tell us a bit more about this exciting new project from Theatr Clwyd.

How would you describe Curtain Up?

It’s like a conveyor belt of theatre. So we start week one with a group of ten actors who work on five new plays, about 10-15 minutes long each, written by five playwrights who were specifically commissioned for this project. They have one week of rehearsals, one week of tech, and then open the following week. Meanwhile, during their tech week, a second company of ten actors come in and start rehearsing another five plays, with the third group of ten actors coming in to rehearse another five plays a week after. So that’s 15 new playwrights that have been commissioned for a project involving 30 actors in total.

How did the idea first come about?

It was borne from a series of conversations that Tamara (Artistic Director) and Liam (Executive Director) were having during lockdown with freelancers. They just asked, ‘What can we do to support you guys? What do you need?’ and the general consensus was that creative people can only live when they’re being creative – we’re just such strange beings, aren’t we, that nothing else really feeds our soul – and so Tamara and Liam came up with this concept, this conveyor belt of theatre, which allows us to give as many freelancers as possible the opportunity to be creative. It gives 15 writers a paid commission to write something after what might have felt like an age; to write something that is going to be seen, and hear people saying their words. It gives actors a space where they can just play and learn lines and be silly again. And it allows design, stage management, lighting, all of these freelance jobs, an opportunity to use their craft again after so long; to be creative on a huge scale.

So not only do the audience have the opportunity to see five new plays each week but the really good thing about Curtain Up is that an audience member can come every night and see something different. We’ve cast it in such a way that two actors learn every role, and at the start of the show we “rock, paper, scissors” it to see which actor will do which show that night and what part they are going to play. (So that’s the fun and excitement we’ve really been missing; the chance to not just be creative in rehearsal but for that to still live and breathe in the production.) Also, the writers were asked to include an unspecified prop in their play so the actors don’t know what that prop will be. The audience chooses the props at the start of the night and the actors are only handed the prop as soon as the play starts so there’s some improvisation: they have to react differently, which can change the course of the play. It’s all about having spontaneity again and feeling that excitement of live theatre. Every night is super-charged because things change, props change, the costumes change, an actor might do the scene opposite one actor one night and then do the scene opposite a totally different actor the next, so every night it’s something different.

Has it felt like an explosion of creative energy being back on stage after so long?

I think everyone has felt the same, me included. On day one, going into a rehearsal room and thinking, ‘Oh my gosh, can I even do this anymore? I haven’t done this for so long. Can I still do this?’ But I feel so lucky right now to be sat on a stage, and it’s the same for the whole company, not just the actors but stage management too, to be able to do the things that we love and we’ve really missed. I think an explosion is a great way of putting it because I think that’s what it will feel like every night. It is going to be different; and I think, in a world where nothing really feels steady at the minute, it’s kind of nice to have that little bit of tension on stage as well, that little bit of no one knows what’s going to happen, and the excitement and energy that comes from that.

Was it a conscious choice to perform the plays in the round?

It was a conscious decision because it’s about bringing people together again and, ultimately, the reason why this project is so special is because we aren’t flying in sets or have a huge budget. What is at the heart of it is storytelling and actually hearing stories again, which is what I’ve missed so much. I think being in the round is so much like sitting around a campfire and telling a story – that is where we come from and how we tell stories. It also allows the actors to have real fluidity. They can move; and with it being double cast, it opens the space and it becomes like a big playing field for them. We want the audience to feel like they’re in this bubble and to feel like we are all united again in being together.

You can’t tell a story the same, and what is so exciting about this is having five stories from five writers with five different backgrounds – totally different people, totally different identities, with totally different upbringings, from totally different homes – so every single play is different. One of the plays is set on a spaceship, for example, and then for another we’re in someone’s living room. And that is the beauty of theatre: that we are transposed from place to place and we totally believe that. It’s so imaginative.

But though each of the play’s are different, each of the five writers was given a theme – so the first one is new beginnings, the second is finding feet, and so on – so that every night has got an arc that will take us through the night. So although the audience will see five different stories each week, they will have gone on a journey on the night through these themes. And to add to the diversity, we have some Welsh language stories too, which was a bit of a logistical challenge to make sure that four of the actors were Welsh speakers, but it’s been really great to have these Welsh language plays as well and to have Welsh language theatre included. I know that this was one of the most important things for Tamara and Liam, to make sure that it was truly diverse and was championing many different voices in Wales.

How excited are you about the writing talent coming out of Wales at the moment, and the opportunity that something like this affords them?

The thing that excites me most is working with a writer and sitting down to work on a new play and having that seed of an idea and seeing it through. It is one of the best things in the world. But aside from these sorts of opportunities, what Curtain Up has done is given 15 people a chance to write – how many of these writers may have come out of lockdown and lost their love for it, or not had the opportunity to do it, or were working elsewhere and had no time to fit it in – so as much as it’s about wanting to commission new writers, it’s also about giving people time and space to just write, without them feeling like they have to come up with anything. Yes, this is a commission, but more than that it has given them a bit of time and a bit of space to just do what they love. If that then ignites something in them to then write something else, great. But it’s about letting people have time and space to just do what they love without having to produce something all the time; where there’s no pressure to write. That’s hard when it’s something you might be doing alongside another job because you need to live. So, yeah, I think more of that would be great because that is where some of the best work is made, when there’s no pressure to have something in by a deadline, as you can make what you want when you have time and space.

Click here to find out more and book tickets.