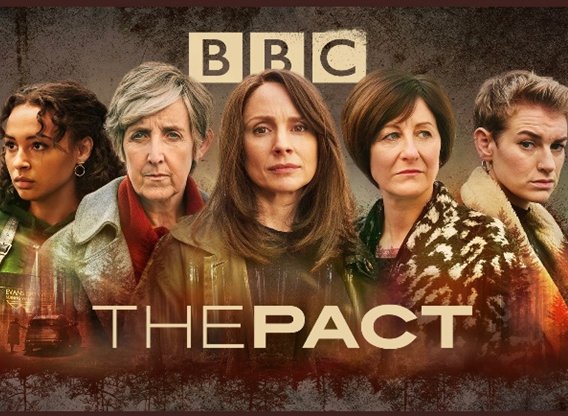 There is a moment during the final episode of BBC1 drama The Pact when its writer, Pete McTighe, attempts to deconstruct the truth. Julie Hesmondhalgh’s character Nancy, one of the four women caught up at the centre of a murder investigation, begins a Shakespearean dialogue with her priest (Mark Lewis-Jones), telling him that we all wear masks and play parts. No one is ever truly themselves, she admits. “I’ve come to realise that it’s the absence of truth that holds us together”. When Father Martin responds to her “cynical worldview”, I’m inclined to agree with him. But I do wonder if McTighe has still necessarily muddied the waters to offer a critique of truth as a negative construct: sometimes dangerous, potentially destructive, and capable of being subverted by something greater than itself.

This critique plays out in the central narrative of the drama. After brewery boss Jack Evans (Aneurin Barnard) is found dead in the woods, having been innocently left there by four friends in a humorous act of revenge for his snide comments the night before, the group endeavour to create a cover story so as not to be implicated in the subsequent investigation. They attempt to absolve themselves of the situation, thinking about the possible ramifications should their involvement be uncovered. They are driven by fear of where the truth might lead, and attempt to abscond it by living a lie. What takes shape over the course of six episodes is a fascinating interplay between truth and lie. It is at its most dynamic in episode five when Anna (Laura Fraser) reveals to her husband, police officer Max (Jason Hughes), what really happened. In doing so, she makes him complicit; forced to choose between his personal and professional commitments. It becomes a choice between telling the truth or living the lie; and in choosing the latter, the lie becomes the truth that drives the lie. In other words, he acknowledges the destructive consequences that the truth poses to his family, and so seeks to avert this risk entirely by becoming entangled, like the rest, in a web of deceit.

Ordinarily, one might assume that McTighe is telling a simple story of corruption. However, I believe he presents a rather deft commentary on the nature of friendship. I think it goes to the heart of what Nancy means when she describes “the absence of truth that holds us together”. For the lie which Anna, Nancy, Louie (Eiry Thomas) and Cat (Heledd Gwynn) concoct, which some of their nearest and dearest are eventually drawn into, becomes the basis for which trust between them is built.  The Pact is not so much an exercise in secrecy then as trust. It may be that the lie wins but only as an expression of self-sacrifice. Nancy gives of herself in an act of grace that saves the guilty Tamsin (Gabrielle Creevy), complicating the typical formula of the crime drama where the mystery murderer is finally unveiled and given their comeuppance. There is no good and evil as solidly defined categories here. Instead, everyone falls short in their own way, having to pay penance for their actions on the night of Jack’s death, to paraphrase Nancy. Her response is, perhaps not surprisingly, steeped in a theology of sin and atonement which, though far from straightforward, still leaves plenty of food for thought on the place of justice and truth.

When I came to The Pact, I was expecting to comment on its place within the landscape of Welsh TV drama. It is certainly an interesting addition to the canon, with its strong Welsh cast supplemented by a scattering of British stars representing a Wales with fluid borders; a community with a recognisably local identity but peppered with the accents of Scots and English settlers. It is not quite the bilingualism of a Bang or Hinterland but neither is it a homogenously accented whole. It has given Eiry Thomas an opportunity to take on a role that sees her come into her own, her star turn opposite heavyweights like Eddie Marsan (Arwel) and Hesmondhalgh announcing her as an accomplished lead. Rakie Ayola is superb as deadpan detective DS Hammond, her commanding presence softened beautifully by her dry wit and no-nonsense comment. Meanwhile, Abbie Hern makes her debut acting role as Tish a memorable one, her performance opposite Heledd Gwynn making her one to watch for the future. However, for all its stunning shots of the landscape, its subtly effective music and excellent cast, it is the narrative themes that have really drawn me into this drama and kept my interest throughout. The Pact has been a thought-provoking crime thriller which has left me with something to think about.

One thought on “Series Review, The Pact, BBC1, by Gareth Williams”