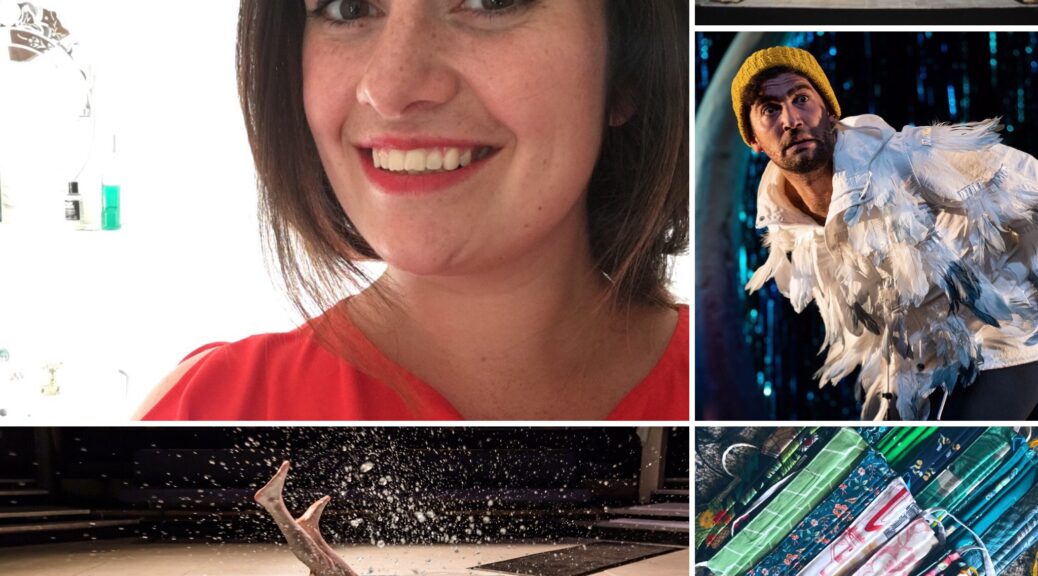 Hi Cory great to meet you, can you give our readers some background information on yourself please?

I’m Cory, I’m 29 and I am a theatre designer.  I was born in Wales and trained on the MA Design for Performance course at the RWCMD.  I’m an avid houseplant collector, a lover of cats and a huge drinker of coffee!

I was always really lucky, Mum had a huge interest in theatre and took me regularly to see shows of all different scales.  I grew up listening the Les Miserables soundtrack and with both parents supporting me to go into it as a career.

I also had an incredible drama teacher who was my driving force.  I can remember going to see the Shakespeare histories on cycle at the RSC on a trip and just being absolutely captivated about how the words literally came to life – I still believe Shakespeare should never be solely read.  We created huge school shows on an assembly stage and a shoestring budget, with him spending all of his own hours building and scenery painting. His dedication to the arts and the creativity he showed me is absolutely the reason I do what I do today.

Prior to studying for an MA in Theatre Design at RWCMD you studied for a Degree in English and Drama at Cardiff Metropolitan University. Does your knowledge of text impact your approach to the design process?

Oh absolutely! Analysing text is a huge part of what we do, although perhaps not quite to the level of degree an English student does.  I think reading is generally a very important skill for being a designer – we get through a lot of scripts a year and the ability to absorb them easily and quickly is an advantage.  However I do occasionally get a little too analytical and technical, which can hinder the creative process slightly.  Being incredibly practical is part of the job, but teaching myself to get out of the “organised and analytic” brain and into the “free imagination” one was a huge learning curve.

The freelance sector has been hugely affected with the Covid-19 Pandemic and subsequent loss of work. How did this affect you and can you see things improving as the vaccine roll out continues?

It won’t come as a surprise to anyone that everyone in the arts was hit massively – myself included.  I lost about 6 jobs over night to a point where I just turned my phone off and shoved it in a drawer to protect myself from the onslaught of sad news.  It only got harder when I realised myself, and many others like me, didn’t qualify for financial help regardless of being self-employed for years.

It’s been a very hard year, but I have managed to try and find some positives.  I spent a few months improving some skills, making masks, meetings friends I had put off for years due to being too busy and generally just took more time for myself.

I would like to think the vaccine rollout will move things forward to a place where we can do things that resemble normal again, but it will take time.  For many of us, adapting to social occasions again will take time, and it’s important we remember that not everyone is ready for the welcoming hug in a rehearsal space.

There has been a great deal of discussion on new ways of working within the cultural sector as things improve. What ways of working would you like to see established, particularly for freelancers?

I’d like to think the industry will come back stronger – and there are signs of it.  For the first time in years we are seeing freelancers and artists being put at the forefront of buildings (which is long overdue – its how most of us ended up adrift and poor during the pandemic) with schemes like the WMC Creative Associates

New Diorama creating free rehearsals spaces and development for freelancers and hopefully this is just the beginning.  I want to see more open hiring (for anyone who hasn’t, sign up to Open Hire…) so that we get out of the bubble of the same creatives in the same buildings all of the time.  I want to see more diverse teams, where everyone is treated with respect and with value.

Selfishly, I want to see better designers’ rights.  We are hugely underpaid, have very little in terms of opportunities unless you know people, and ultimately for parents it’s even harder – how do you do tech working hours if you want a family and are seen as the primary caregiver? This isn’t just about women.  It’s a long overdue conversation, but we need more resident designer opportunities, more open job adverts and more flexibility for working parents everywhere.

Networking is pretty much everything at the moment – who you know is half of the job.  It isn’t the way it should be, but it is.  Make an effort to introduce yourself to people who work in theatre, know who is making the work you like and see it so that you can talk about it. Absolutely train, you can do it without formal training, but a formal training centre will give you the boost not the industry that is so helpful – the RWCMD exhibition was a great step-up for us all. Yes it is possible – I’m managing it, and I never thought I would be able to.  It’s hard, I won’t lie but it is the best job in the world.  I am my own boss, I control my deadlines, I meet the best people and I get to create things that inspire audiences and thats amazing! Yes, the hours are really hard and the pay sometimes is awful – especially when you’re starting out, but its still worth it, just be ready to work incredibly hard and fight for your place.  There are so many things we need to change in the industry but we need people to help us change it.

Colin Richmond, first and foremost.  I think there’s something beautiful about everything he does – even his costume sketches are a work of art.

Secondly – Anna Fleischle for her arduous work on women in theatre and being very honest about her experiences. Her work is also incredible in a very different way.  For anyone unfamiliar, check out Hangmen at The Royal Court.

I’ve also got a huge amount of respect for Grace Smart, a designer who writes frequently in The Stage telling of her opinions on the rights of designers, the state of the theatre world and really opening the book up on how everyday is a challenge and as wonderful as the job is, it can be a challenge and a joy at the same time.

Can you share your approach to the design process? What would your normal working day consist of?

A normal working day? I don’t know if it exists! I spend a lot of time reading texts, and researching through various source books I’ve gathered over the year.   Sometimes a design concept appears suddenly out of somewhere you would never expect to find it.

A little further down the line an average day consists of model making, slaving over my desk with tiny furniture and endless coffee. Either that, or online shopping and charity shop trawling for costumes, or sketching them in all sorts of different styles.  Its why I love the job so much – a normal day just isn’t a thing, every day brings its own different set of tasks and challenges!

Get the Chance works to support a diverse range of members of the public to access cultural provision. Are you aware of any barriers that creatives in Wales face? If you are, what might be done to remove these barriers?

The biggest barrier I found working in Wales was how hard it was to get employed.  Theres a systemic failing in British Theatre that to be seen as successful you have to have made work in London – its the only reason I moved, and sadly the move proved my point.   Wales (and other regional theatres) need to make hiring more accessible, allow people to apply for posts allowing a wider range of candidates – give priority to Welsh and Wales based artists.  I would love to see theatres give a show a year to a graduate or someone who graduated in the last 18 months in Wales and give them a shot to prove they can work professionally out of drama school.

With the roll out of the Covid-19 vacancies, the arts sector is hopeful audiences will return to venues and theatres. If theatres want to attract audiences what do you think they should do?

Ticket prices are a huge problem in terms of encouraging people in.  It will be a hard few months in terms of audience confidence anyway, but a lot of people who normally go to the theatre will be significantly worse off than they were before.  Opening previews with a Pay What You Can would be a great step to encourage people back, but I think we should also be open about what we are doing to make sure people are safe.  Advertise the covid measures for cast, crew and audiences to encourage audience support.  Audiences will return, live theatre is too unique of an experience to not be tempted!

I’d love to see the development of new musicals coming from the land of song! Wales is known for its arts and culture, our male voice choirs, our language. We should use these skills and become known as the producer of new musical work – the industry needs it desperately, as well as a producing house to put it in.  After all, we have some great producing houses – lets sponsor growing new talents.

Dual-language.  I think it’s incredible that works can be seen in two languages and how we blend those together to create something is really special.  I’m not a Welsh speaker, but I think the pride we have in our nation and our sense of patriotism is something truly special and to be able to present that in our own language through art is a truly amazing thing that I would like to see more of!

I recently managed to see Cruise the Play here in London which was truly incredible. One man show, an hour and a half long, played by Jack Holden who also had various other roles in the production.  He told the story of the AIDS crisis in the 1980’s through the eyes of two men who were diagnosed but the ending truly hit me.  In a brilliant moment of stepping out of the dramatised narrative Jack tells of how he feared turning 30 through a pandemic (as if I’m honest, so have I) and that after walking through Soho in the current times during a health crisis of a different kind, he realised that he was lucky to be turning 30, when so many don’t get that chance.  It really put perspective on the last year and what so many have lost.