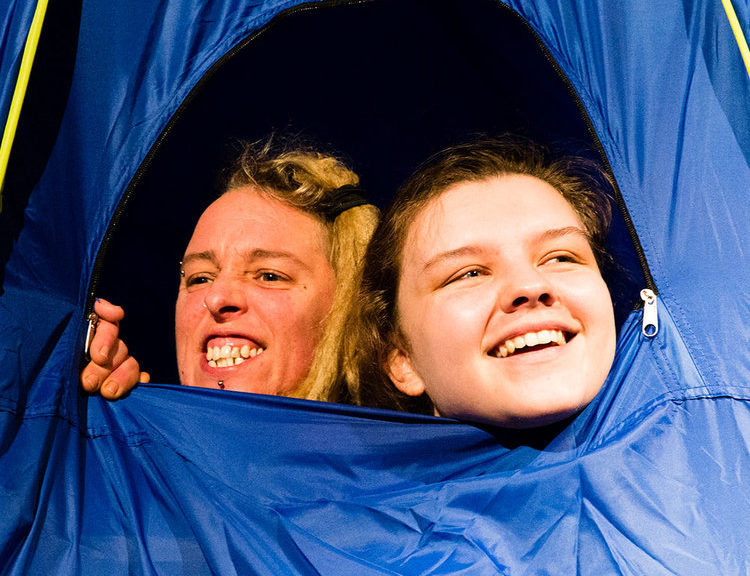 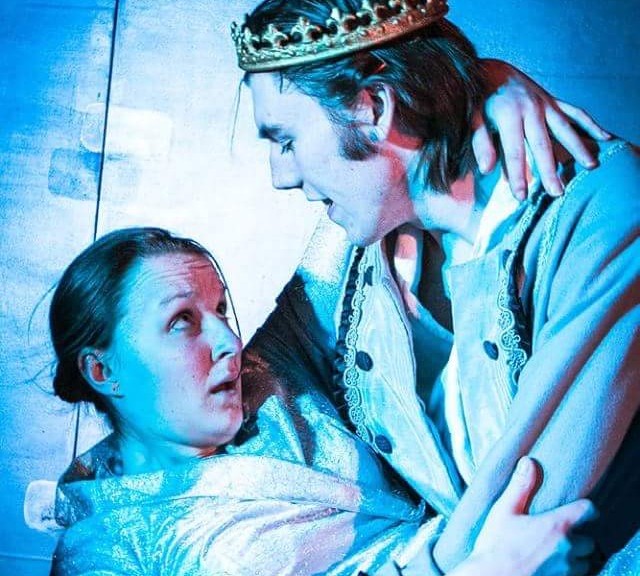 At the Halliwell Theatre in Carmarthen tonight I and many others were treated to some magically, musical, modernised, mashed up versions of our best loved fairy tales. Cleverly concocted by James Scannell and performed by BA3 Acting and Design & Production students from the University of Wales Trinity Saint David, Carmarthen. The production had a very cheeky guilty pleasure playlist and some wonderful Welsh wit, the telling of many tales begins and we are immediately thrown into the magical world of make-believe.

We race through the rhymes, from Cinderella (Emma Davies) to Snow White (Suzy Hambrige), The Three Little Pigs to Goldilocks (Alex Delaney) and Jack and the Beanstalk to Little Red Riding Hood (Hannah Gray). With some hilarious narration from our constant comic, Jack, (Ryan Edmunds) who’s own story is told later too, and as well as being the Evil Queen’s (Rebecca Hazzleton) most hysterically blunt magic mirror, he also keeps us up to date with where we’re off to next in this scrambled world of magical mayhem. In Cinderella’s world we meet a very proper yet fairly pompous Prince Charming (Thomas Halkes) who is much more suited to Cinder’s ugly sisters, and so the lovable Buttons (Abbie Edwards) is finally given his perfect happy ending. From there we’re taken to Snow White’s world where the magic mirror gets a promotion and the huntsman becomes a hero, and in a bright flash we find ourselves the cosy home of The Three Little Bear’s. Here baby bear’s a Bieber fan and guilty Goldilocks gets taken to court, which is where we aptly learn the moral of the story. And of course, a fairy-tale farce is never complete without a little rendezvous into the woods! Here we find our favourite Grandma, (Jessica Kabesh) who’s got some dangerously good dance moves and an admirable love for Mars Bars. She’s waiting for her Little Red Riding Hood (Hannah Gray), who may well have just caught the last train back from Barry, to deliver her Grandma her favourite treats only to be met by the wicked wolf, who doesn’t stand a chance against Little Red and her Judo skills. But last but not least we are met with Jack, his ex-wrestler mother, his cow and his beanstalk. I’d say you know how the story goes but not this time, Jack’s mother tackles the giant (wonderfully voiced by none other than Dave Ainsworth) and all is well again in the world of scrambled stories. Oh and did I mention the Three Little Pigs are in this piece too? They forgot to get planning permission for their houses and so the vegetarian wolf (who, funnily enough, used to baby sit them) has had to pop over and remind them how important it is to ‘always ask first’.

This impressively energetic and wonderfully manic piece of magical comedy is a perfect treat to see for all ages. There’s rewritten pop songs, hysterical dance routines, a contagious energy from start to finish and a whole lot of laughter- a perfect pick-me-up performance and a wonderfully panto-esque affair!

The tour ends in Laugharne on Friday 11th December after touring to Devon and in and around Wales.