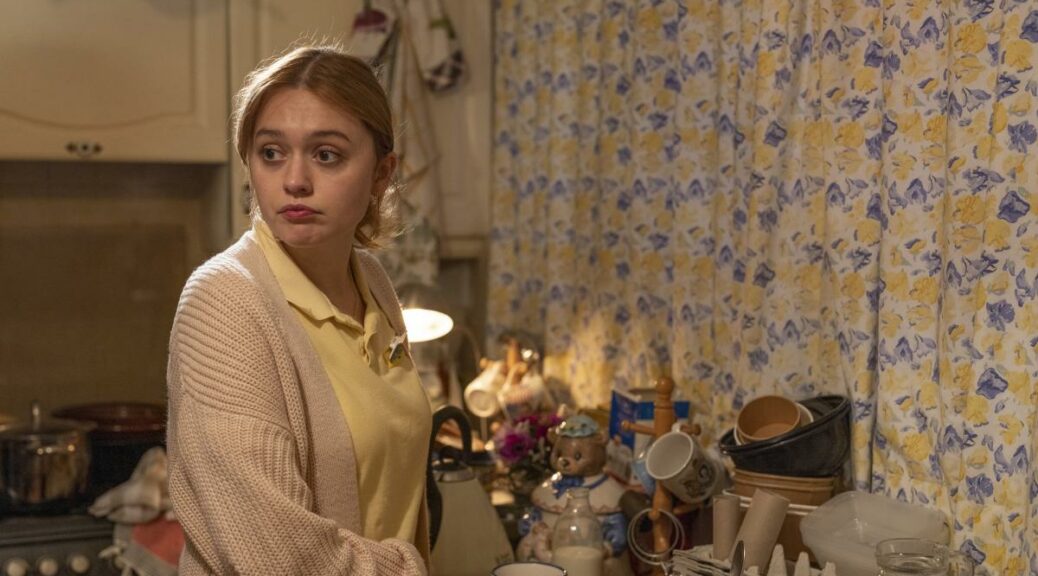 It is a clique to say that I laughed and cried at Channel 4’s anthology series, On the Edge, but it’s true. The three films, devised by new and emerging writers, are stirring, disturbing, entertaining and gripping. Each of them explores the impact of mental health in families through parent-child relationships in ways that are innovative, empowering, and unapologetic. They make for exceptional viewing in their own right; shown together, they become an unmissable 90-minutes of superb drama. I devoured them in a single sitting.

The first, ‘Mincemeat’, by Samantha O’Rourke, is a funny and moving tale starring Aimee Lou Wood. Jane is fresh out of school, working in a shoe shop, trying her best to be a good daughter to her controlling mum (Rosie Cavaliero). When she meets Nish, a boy she had a crush on in school, a sweet romance blossoms between them. However, the far-right views of Jane’s mum cause an irreparable rift that sees the lovers separate but, ultimately, leads Jane to find a sense of purpose. Nikhil Palmer (Nish) and Wood are perfectly suited, portraying the social awkwardness, first-kiss innocence, and gentle encouragement of a developing relationship with rich plausibility. Palmer’s kindness is in direct contrast to the harshness of Cavaliero, who plays Jane’s mother with a good deal of unconscious irony whilst injecting a slight empathy that reveals the pain behind much of her behaviour. She uses the death of her husband, Jane’s father, to guilt trip her children when it suits her, creating a distorted view of him that is blown apart in a moment of revelation that brings Jane freedom. What O’Rourke manages to do so deftly is to work through the underlying issues and motivations behind these characters with a delightful touch of humour. It ensures their humanity is not lost to a dark political underbelly that can otherwise lead to simplistic caricatures. The soundtrack only contributes to the wealth of emotion that exudes through the screen.

The emotion is no less pronounced in the second film, ‘Cradled’, by Nessah Muthy. Here, it is the extraordinary performance of Ellora Torchia as new mum Maia that makes for a compelling watch. She has a seemingly comfortable and ideal life. However, underneath the surface, something more sinister is stirring. She begins to hear a voice, and thinks her baby is in danger. What is witnessed over an enthralling and gut-wrenching half-hour is a descent into mental illness that creates real fear. That fear is so palpably felt through the screen that the tension becomes unbearable at times. Torchia really does embody her character, achieving a verisimilitude that causes genuine terror for its audience. It is not so much the effective horror tropes used in the telling of this story that contribute to this real anxiety as the fact that it involves a little child who appears to be actually at risk such is Torchia’s ability in conveying the awful experience of Maia. Muthy writes in such a way as to give her protagonist a sense of agency whilst simultaneously losing some of that agency to darker forces. The supporting characters are all culpable to some degree of ignoring or belittling her awareness that something is not right. The drama thus becomes a kind of rallying cry to all of us to take mental health seriously. It is, in part, a depiction of the consequences of failing to do so adequately. I breathed a huge sigh of relief at the optimism of its final scenes.

Optimism also marks the final film, ‘Superdad’, by Daniel Rusteau. Not before an incredible amount of nerves have been shredded however. When Keon (Martin McCann) turns up at his ex-partner’s house to wish his son a happy birthday, he gets the door slammed shut in his face. He is determined to make Wesley’s day special though, so he waits until he is walking to school to take him on a road trip that, slowly but surely, is not all it’s crept up to be. Rusteau drip-feeds information that gradually causes unease both for the viewer and Wesley (Joseph Obasohan). First about the car; then a quick dash away from a café; and then, finally, a confrontation at a petrol station. The interaction between the characters at this final point cause the façade of Keon to fall to such an extent as to give rise to worry. Obasohan is so adept at portraying the doubt clearly arising in his character’s mind that, coupled with the juddery movements of the handheld camera accompanying McCann, it is difficult not to be immersed in the tension of the situation. Similarly, his strength at resisting his dad’s calls to get back in the car when he realises the facile nature of his explanations is deeply felt. It conveys a maturity that, like Wood’s Jane, surpasses that of the adult parent, revealing a wisdom and thirst for emotional honesty in young people that can too often be ignored or go unappreciated by their elders. It is the recognition of this at the film’s end that makes it all the more beautiful and heartfelt.

Together, these films express the effects of mental health within modern British families. They are stories told with sensitivity; thrilling yet heartfelt. Filmed across Wales, and made with the support of Creative Wales, they offer the opportunity for new and emerging talent both on and off camera to gain experience working on a production that is on the cutting-edge of storytelling and broadcast on a mainstream channel. This is what public-service broadcasting is for. The three writers that have had the opportunity to showcase their work on such a platform are all deserving of further commissions. If their future stories are as veracious and enjoyable as these half-hourly instalments have been then their future looks bright. Go check them out if you haven’t already. They are simply excellent.

All three films can be viewed on 4OD here. The cases of Lisbeth Slander, The Girl with the Dragon Tatoo, are not for the faint of heart or the for people that lack the ability to pay attention to the details happening on-screen. They are sharp, modern Gothic thrillers that never go easy on the characters and won’t let leave you feeling too optimistic by the end. As soon as this movie starts there is images and visual hints for the rest of the story at hand, two sisters playing chess together and a spider crawls out from under one of the pieces, their father calls them into his room and he pats some kind of machine, the sister Lisbeth takes her sister by the hand and runs away. On the edge of a balcony, the sister goes back to her father while Lisbeth takes the chance of falling out of a balcony and into the snow.

Then kicks off a wild opening sequence that incorporates key imagery of the movie and launches us into present time. It is unique, memorable and effective.

Filling the big black boots of Lisbeth Salander is Claire Foy. She fit into the leather jacket and trousers well while being given an appropriate punky head of hair. Foy’s true strength comes through when the character says hardly anything, many times in the movie she must process information, or listen intently or clearly be pushing her emotions down.

One day she gets a new assignment from a rich man named Frans Balder (Stephen Merchant), he has created a programme called Firefall which is capable of giving whoever has it full control of any missiles in the world. This, of course, was a terrible idea and only now does he regret making such a thing (say nothing of that this is something out of a Saturday morning cartoon idea). So Lizbeth has another case on her hands.

Lizbeth successfully takes Firefall and a special National Security Agent, Edwin Needham (LaKeith Stanfield), whose priority it is now on Lizbeth’s trail. One night while she is quietly bathing she hears a rummaging and men in masks are in her place and they take the laptop with Firefall and set her place aflame. Being that all this is happening there is, of course, a story here and investigating needs doing so in comes Mikael Blomkvist (Sverrir Gudnason), her lover/partner from the previous stories and head of Millenium Magazine. Along with all these players, there is the crime syndicate called The Spiders with a figure that has a very important connection to Lisbeth’s past.

The original Millenium Trilogy was published posthumously from the author Steig Larsson but alas an endearing character and success mean that nothing is really sacred so the books were continued with different authors. I actually cannot attest to the quality of the book because I have not read them. However, the question is raised about being true to style, characters voice, and message.  This is a world of victimized women, brutality, information is true power and there are either bittersweet or certainly no happy endings.

Being the established tone of this world director Fede Alvarez was a good choice to take the reigns as director. With his remake of Evil Dead and Don’t Breathe, he is a creator that has a talent for creating haunting images and visceral experiences. These are Gothic tales, where moments from the past carry over to the present and such such images must be striking and say something about the story, I won’t describe them, you will see them and understand. Also, there are more than a few visceral encounters throughout and you feel the impact of the punches and bullet shots, with the use of a shaky camera that always knows what to focus on and sharp sound design, hearing every tightening rope, gasping breath and shattering glass.

The whole stories construction is well built. Characters have their own voice, serve their purpose as players in a game, yet you still believe they are real people, there are a MacGuffin and plenty of twists and turns throughout. Though there are just a few times when things play too neatly for Lisbeth and the concept of Firefall is not the most feasible.

Heightening most of the scenes is the score by Roque Banos. He invokes Bernard Herman’s score in Psycho with mostly strings played fast to produce a shrieking effect. Other times he brings in drums to emphasize the rhythm and time sensitivity of the scene at hand.

This world and these characters have become like Sherlock Holmes, Zatoichi, James Bond or Batman. Where it is fertile landscape for stories, though they are distinct and the characters are defined but also malleable enough for other actors, writers, and directors to come in and give their interpretation of the world.

If you are a fan of any of the other movies then this one will also appeal to you. If you care for hard-hitting spy thriller then this one will check all the boxes also. If are a fan of both of those but also care for deeper subject matter in terms of characters and why they do what they do then this one, again is for you, if not then pass on by when you buy your ticket, but if so get right on it!