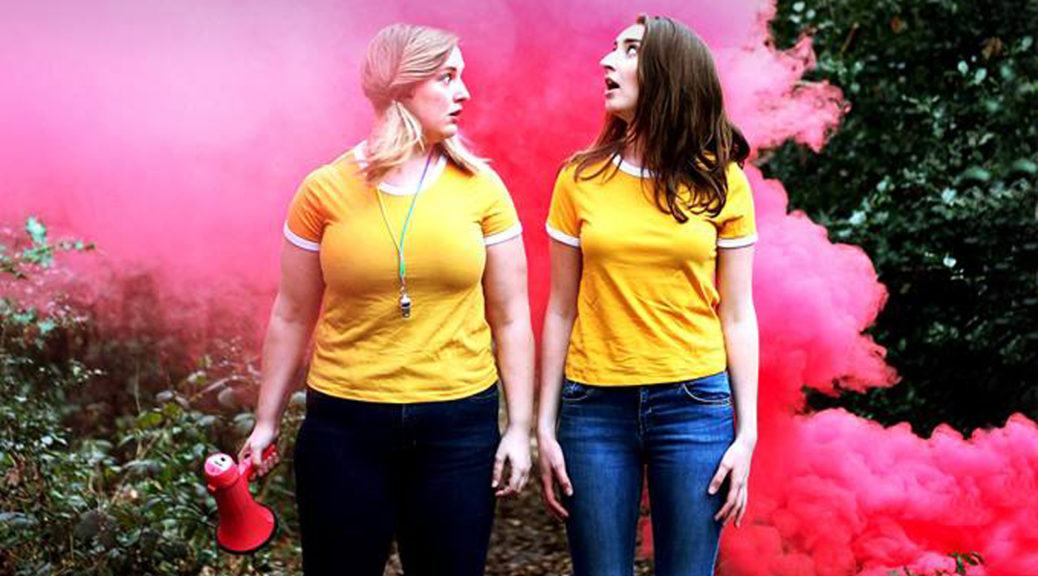 As we enter the space at The Other Room, we are greeted by Betty Walsh (as Betsey) and Emilia Stawicki (Emily). They remind you that your alcohol is apple juice and, as the play starts, that you, the audience, are a group of ten-year-old girls, arriving at Camp Be Yourself. Also, to stay inside the red-markers because there isn’t (but might be) the threat of bears.

What follows is an organised and hilarious mess where two characters, Betsey and Emily, are exploring what it is to be an adult, whilst they’re supposed to be running a camp.

Delusions of grandeur, suppressed insecurities and the absence of a mother drive Betsey’s character. Whilst Emily is nervous, repressing emotion, unsure of herself and eager to impress.

The performances of both characters are hilarious and relatable. Both Walsh and Stawicki are great comedic performers, exploiting the use of facial expressions and mannerisms expertly. They both perform with conviction and full knowledge of their characters who are instantly recognisable, but leave room for growth.

Whilst a lot of that growth and conflict is subtle, it’s presented clearly and naturally throughout. Everyone leaves the theatre sure of who these women are, what issues they have whilst having a good laugh along the way.

The writing is more sophisticated than you might expect. It’s well-structured, the characters have real depth and there’s natural conflict which builds very convincingly.

The writing and performances from Stawicki and Walsh deserve huge credit for achieving this.

The pop-culture references provide a fair amount of comedy throughout. The few references to Tiffany Trump, in particular, are great. The use of music too is really funny. Michael Sambello’s ‘Maniac’ used for a dance-break reminded me of American Pie, when they use the same song for a dance-off. That made me chuckle, along with the use of PTAF’s ‘Boss A** B*tch’, which I recognised from the first drum-beat.

It certainly helps that the references and comedy generally fit my personal sense of humour. Betty Walsh’s character in particular I liked. It reminded me of Ja’mie King from Summer Heights High or a female David Brent. My worry is that perhaps this won’t appeal to an older audience. But a lot of the comedy does come from tried-and-tested means, is fairly intellectual and very self-aware (even if the characters aren’t).

The play touches on various themes, such as; adulthood, sisterhood (in a friendship sense), motherhood, childhood (in particular, how that affects us later in life), responsibility and insecurity. What is really nice about this play is that it doesn’t try to answer any questions, it merely explores the characters and themes in a comedic way and leaves room for you to think further. Both characters have a lot of depth and we explore that through comedy rather than a dramatic exfoliation of their personal history. This works really well and is really satisfying and refreshing to see.

Camp Be Yourself is a must-see, hilarious hour-long exploration of two very different women and their ideas of adulthood.

Camp Be Yourself is part of The Other Room’s ‘Spring Fringe’ curated spring season. One of eight shows coming to Cardiff’s only pub theatre over eight weeks. Tickets can be found for this and other upcoming Spring Fringe shows HERE, with an ever-growing discount for the more shows you book.