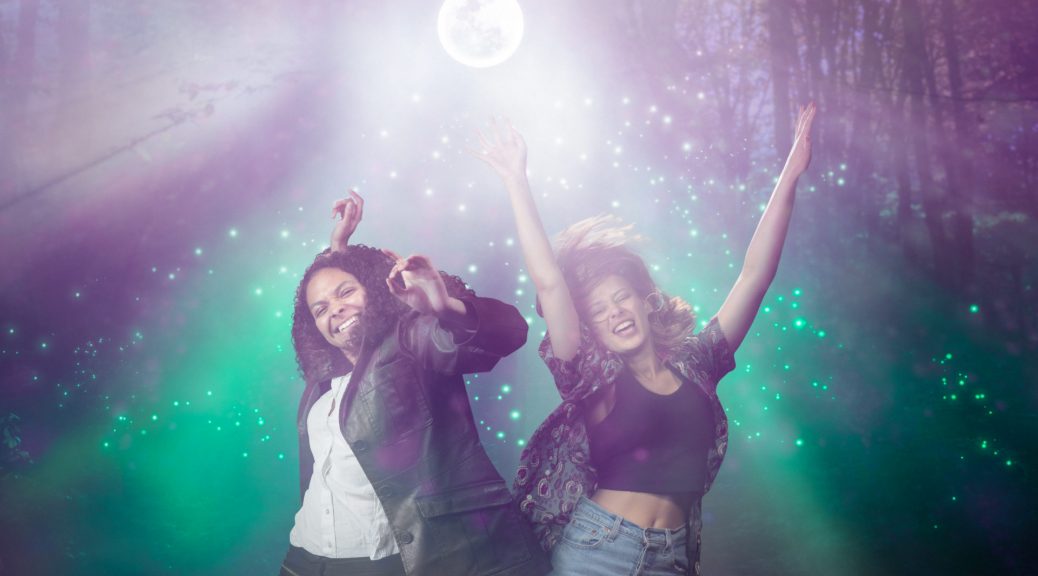 One of Shakespeare’s most beloved plays, A Midsummer Night’s Dream tells the tale of four young Athenians who, caught in the throes of unrequited and forbidden love, seek refuge in the forest and find instead a strange new world of magic and mayhem. Sherman Artistic Director Joe Murphy’s joyous reinvention of the play, featuring Welsh Language adaptations by Mari Izzard (HELA) and Sherman Writer in Residence Nia Morais (Crafangau / Claws), sprinkles a little Welsh magic on this production, making it utterly unique and absolutely unmissable.

Central to this is the combination of Welsh and English dialogue used throughout (all Welsh dialogue is surtitled in English). The (patriarchal) Athenians speak English while the (matriarchal) Fair Folk speak Welsh – and the moment a character is put under a spell, they switch languages. Welsh becomes the language of magic and mischief, of freedom and control, of love and lust. As with English in the play, it doesn’t just represent one thing: and that blurring between binaries, boundaries and borders underscores the subversiveness of this production; a production which also swaps the gender of characters like Puck (Leah Gaffey) and Lysanna (Lauren Morais) and the roles of Titania (Nia Roberts) and Oberon (Sion Ifan).

It’s a choice that deepen the star-crossed love story at its core, and which brings exciting new perspectives on sexuality, gender roles, and also to the hierarchies in both realms, where the tension between the soon-to-be-married Theseus and Hippolyta mirrors the widening schism between the Fairy King and Queen. Roberts brings a feral grace to Titania and commands the stage even as the conquered Amazonian Queen. Meanwhile, Ifan relishes both the imperious Duke and the impassioned Oberon; his eulogy for his fallen disciple is genuinely moving, even if the uneven power dynamics complicate his grief.

The set, designed by Elin Steele, an imposing Art Deco amphitheater of emerald green, doubles as both an Athenian temple and a magical forest. Its striking central feature is a RuPaul-esque runway fit for a Queen – and yes, we are indeed treated to the sight of Titania and Oberon sashaying their way down the stage (Shantay, you both stay!) In fact, many of the magic-induced brawls between Lysanna and Demetrius (Tom Mumford), and Helena (Rebecca Wilson) and Hermia (Dena Davies, in her professional stage debut), have the knowing melodrama of a Drag Race feud.

It’s tricky to pitch a Shakespearean comedy to modern day audiences, because the intricacies of the language and the shifting cultural touchstones mean that the punchlines don’t always land. But that isn’t the case with this production, which is easily the most hilarious show I’ve seen in years! Gaffey’s Puck ping pongs about the stage as an impish emcee with charisma to spare while the Mechanicals, led by Hannah McPake’s beleaguered Peter Quince and performed by members of non-professional theatre group the Sherman Player, lend a chaotic charm to their doomed dramatics. It’s brilliant to see these excellent young actors get the chance to shine in a professional production, and it will be exciting to see where Edward Lee, Cerys Morgan, Ariadne Koursarou, and Callum Davies go next.

Midsummer’s comedic lynchpin though is the marvellous Sion Pritchard as Nick Bottom, whose comic timing is a thing of beauty. (Anyone who has sampled the delights of S4C original comedy Rybish knows exactly what I’m talking about). His karaoke duet with Ifan’s lovestruck Oberon is a particular highlight – you’ll never hear ‘I Want to Know What Love Is’ the same way again – and his Pyramus simply has to be seen to be believed (imagine a drunk Al Pacino doing an Elvis Presley impression, and you’re halfway there).

Fun, flirty and fabulous, A Midsummer Night’s Dream is the perfect remedy for the past few years, with a tremendously skilled ensemble of Welsh and Wales-based actors bringing new life and fresh laughs to a familiar tale. By the time Midsummer concludes, the story might be done but the dream goes on. The endless potential for transformation – of language, of text, of self – is the true dream, and the Sherman has shown it can be our reality too.

A Midsummer Night’s Dream is performing at the Sherman Theatre until 29 October (you can find out more about the production and book tickets here).