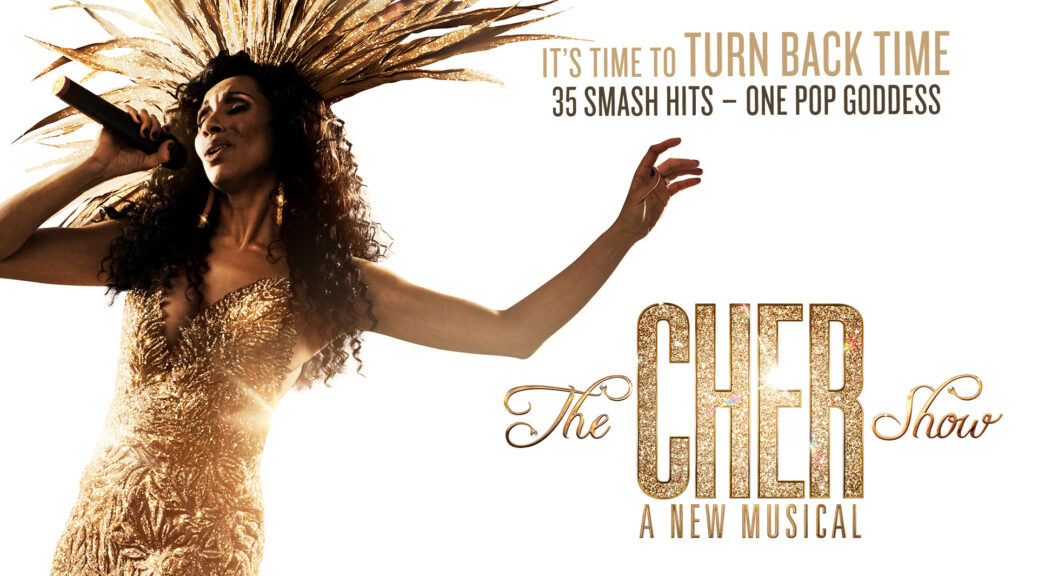 What follows is a syndicated interview with The Cher Show choreographer, Oti Mabuse.

The Cher Show is a brand new musical which tells the life story of the legendary recording artist, and is packed with 35 of her biggest hits, including ‘If I Could Turn Back Time’, ‘I Got You Babe’, ‘The Shoop Shoop Song’ and ‘Believe’. With book by Tony and Olivier Award-winning Rick Elice (Jersey Boys, The Addams Family), direction by Arlene Phillips (Saturday Night Fever, Starlight Express), choreography by Oti Mabuse (two-time Strictly Come Dancing champion) and costume design by Gabriella Slade (Six, In The Heights), The Cher Show is playing at Cardiff’s New Theatre between 23 – 27 August and continues touring around the UK and Ireland through to 1 April 2023.

A bundle of zesty energy, Oti Mabuse may be on a rare day off when we meet but she’s still operating at warp speed. But then the double Strictly Glitterball champion has good reason to be so happy and animated.

Currently revving up for the hotly anticipated brand new production of The Cher Show, directed by national dance treasure Arlene Phillips and with a book by Tony and Olivier Award-winning Rick Elice (of Jersey Boys fame), Oti will be choreographing the show, which will tour until April 2023.

Telling the story of the Armenian American truck driver’s shy daughter who rose to global stardom, The Cher Show charts superstar Cher’s meteoric rise to fame. And of course there is a cracking soundtrack. Packed with 35 of her biggest hits, it’s part show and part party.

“It’s the story that so many women connect with, but it’s also the songs and the clothes. It will be epic!” beams Oti, adding: “It has to be bigger than anything because it’s her; it has to live up to Cher’s iconic status. Shehas been such an inspiration to so many people and this musical is going to be a celebration of everything people love about her.”

And so it’s down to Oti to weave that star quality into the choreography – a challenge that she is absolutely thrilled with.

“What I love about choreography is that, when I’m dancing, I am only part of the picture, but when you are choreographing, there are so many elements that are so exciting. Creating a storyline through dance means you go through the smallest details – is there a connection or a secret between the dancers that we need the audience to share? What props are there? What is the dancer at the back of the stage doing?”

As for the music, Oti’s exuberance ratchets up yet another notch when we start talking about Cher’s hits.

“I grew up with a family that always listened to music and we all loved Cher’s music. Her songs have stories behind them and I LOVE choreography that has a story behind it! It has an intention you can then give to the movement. It makes everyone in the theatre part of the story. And everyone connects to Cher’s music because it is timeless. SHE is timeless!

“The show starts from the beginning of her life and comes to present day, so if you don’t know Cher’s story you will learn it. There are so many great songs that will make people feel uplifted too. And the show is going to almost every theatre in the country because Cher is an international phenomenon!”

But while she won’t be on the road with The Cher Show, Oti will be touring with her own dance production, I Am Here.

“This is very exciting because it’s my first official tour. It’s such an honour. It’s going to be loud, funny and truthful, and people will meet the real me. We have a live band, great music and a cast of great dancers.

“I love touring and the audiences make it for me. People have paid to come and be entertained and it’s lovely to do that; to create a memorable moment in their lives.”

And, it seems, Oti relishes the educational aspect of touring life.

“I love learning and when you tour in the UK you learn crazy things like whether you put cream or jam on a scone first! I love hearing the different accents and the different way people greet each other depending where you are.”

With an infectious chuckle she adds: “I think touring is the best way to understand human beings!”

“All the theatres my shows are visiting are so supportive of people who come to put a show on; they are so welcoming and so, so hard working. After lockdown and the terrible time that theatres had, it is so lovely to be taking The Cher Show and Here I Am on tour.”

But even with two stage shows hitting the road, human dynamo Oti is still thinking ahead.

“I have a lot of things that I want to achieve in life and I am lucky that my parents raised me to be driven and ambitious. But my goals come from a good place and I really enjoy the journey of pursuing my dreams. Anyone who hires me knows that I will be the hardest working person in the place. For instance, there were very few books about dancing for children, so I wrote one.”

And that’s by no means all. Born in South Africa in 1990, Oti has been dancing since childhood. From making a name for herself in South Africa as the undefeated  eight-time South African Latin American champion, she also managed to train as a Civil Engineer while competing in dance competitions. Winning awards and championships across Europe, TV soon beckoned and Oti joined the German version of Strictly Come Dancing. After two successful seasons, she joined the original BBC version of the show. Winning the coveted trophy in 2019 with actor Kelvin Fletcher, the following year Oti became the first Strictly Pro ever to win the Glitterball two consecutive years, alongside her partner Bill Bailey. TV and theatre work continues to flood in, which she juggles with running The Oti Mabuse Dance Studio, but, I ask, was performing always the dream?

“I wanted to go into Musical Theatre straight from High School, but my mum said I should be first academic and then pursue my passions. Since she was paying the bills, I didn’t have much choice!”

Reflective for a moment, she adds: “Engineering and dance are both about problem solving and precision and I love them both equally. I’d love to do a TV show about it.”

A TV show about engineering told through the medium of dance? If anyone can pull that off then it’s Oti. Stand by for the Reinforced Concrete Rumba…