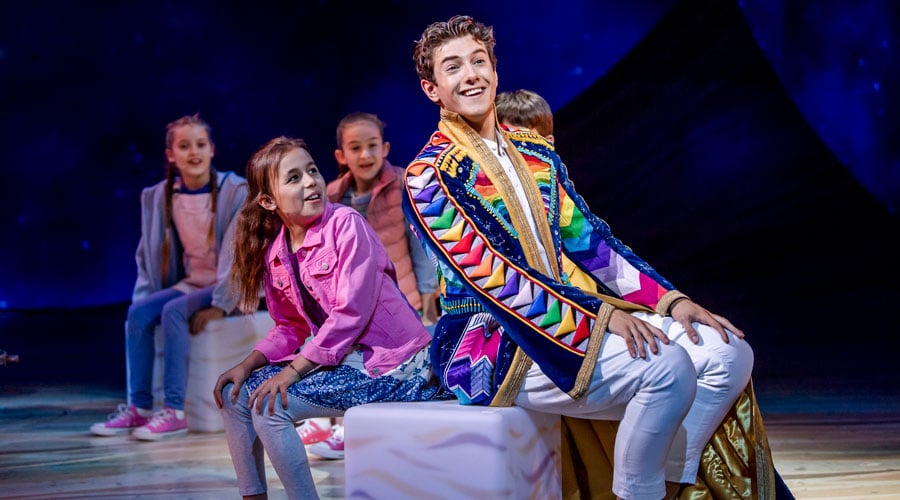 What follows is a syndicated interview with Joseph and the Amazing Technicolor Dreamcoat star Jac Yarrow.

Joseph is such a fun, upbeat musical. Is that what we all need right now?
Oh my gosh, 100% yes. When we did it at the London Palladium our favourite shows to do would always be the Saturday or Sunday matinees because we’d get the crowds from all over the UK, not just the London crowds. To be able take this show to the regional theatres that have been closed for so long is just the tonic everybody needs. And particularly this incarnation of Joseph, which is the same production you got at the Palladium. It’s lavish and no-expense-sparred, and it’s really going to lift everyone’s spirits.

You first played the title role in 2019. How did that change your life?
It completely changed my life. I was still at drama school when I got the part and it was literally over the course of two or three days that I went from getting the role to it being announced. I went from being a student living in digs dreaming of being in the West End to suddenly living that dream for real.

You returned to the show again last year and now you’re touring in it. What keeps drawing you back?
It’s massively to do with the fans of the show. It has such an amazing fanbase and it’s ingrained in people’s DNA in the UK. Everybody knows the music and everybody’s grown up with it, even if they’re not aware of where it comes from. People come along and see the show all the time and go: ‘I didn’t realise that song was in it. I love that song and I used to sing it in school.’ I’m thrilled to keep coming back to it for that reason, plus to pass up the opportunity to take this incredible, up-to-date production that changed my life to people’s hometowns would have been crazy.

The show is a perennial school favourite. Were you in any school productions yourself?
I wasn’t in a school production as such but when I was around ten I was in a 30-minute condensed version of Joseph at my Saturday drama school. I did play Joseph himself but I don’t think I had a dreamcoat, just a makeshift little jacket or something. That was my only brush with the show as a kid, although I did see it later when it came to my hometown of Cardiff. I remember really enjoying it and it’s going to be a nice full-circle when I go back to the New Theatre and am on that stage myself.

Can you relate to Joseph in any way?
Yes, especially when I first started. There was the naivety and moving from the home comforts of Cardiff myself and Egypt in his case. It was like somebody flipped a switch and everything turned Technicolor. [Laughs] But my family isn’t as big as his and they certainly treat me a lot nicer.

Do you hit the gym to make sure you look good in the shirtless scenes?
Doing eight shows a week where I’m constantly running around keeps me in pretty good shape but I go to the gym, I eat well and I drink a lot of water – but that’s the stuff you have to do anyway when you’re doing such a full-on show as this.

Jason Donovan, who now stars as Pharaoh, played Joseph in 1991. How is it following in his footsteps?
It’s great. From day one Jason has been the most supportive person. I was terrified when I had to sing Close Every Door in front of him at rehearsal but he’s been amazing. He was the first person to throw his arms around me, congratulate me and give me the boost that I needed early on. Now we have such a laugh. He’s such a fun guy and he’s another reason why I wanted to go on tour with the show, because who better to do that with than Jason Donovan?

Might you play Pharaoh yourself one day?
This is the joke we always make. You could do Joseph forever because you could graduate from Joseph himself to Pharaoh and then you could finally move on to Jacob.

The West End production was one of the first to open to full capacity after social-distancing restrictions. What was the atmosphere like?
It was unbelievable. The atmosphere at Joseph is amazing anyway because of the fans and the way the Palladium is figured it’s such an intimate space, even though it’s huge. Then when the restrictions were lifted and we had full houses it was unbelievable. It’s such a tonic and, as I say, just the kind of show people want to see to lift their spirits. We were all emotional and it was quite overwhelming.

Joseph has been going strong since the early 70s. Why do you think audiences still love it?
I think it’s just timeless and, as Jason always says, it’s a very simple story. What you see is what you get and what you get is a really good time. It’s a wholesome tale about a boy overcoming adversity and it encourages you to follow your dreams. The message is so uplifting and it’s one of those shows that continues from generation to generation. We get people at the stage door saying to Jason ‘You were my Joseph when I was a kid’ and then I meet kids at the stage door and their mums say ‘This is their first time seeing it’ so I’m their Joseph. And it’s such a famous show that it’s kind of ingrained in everybody. It’s a huge part of our theatrical culture in the UK.

The Andrew Lloyd Webber/Tim Rice score is full of great songs. Do you have a favourite to perform?
Definitely Close Every Door and I love Go, Go, Go Joseph because we have an amazing cast and they’re all on stage for that one. It’s a huge production number and I think that’s what is so exciting about taking this particular incarnation of Joseph around the country because it’s like we’re taking the West End production to everyone.

What have been your other favourite in-between-Joseph stage roles?
I’ve been lucky to have taken part in some concerts and some TV stuff as well, and I’ve loved doing panto. My first panto was in Birmingham in 2019, then I was in panto at the Palladium this Christmas just gone with another Joseph, namely Donny Osmond. I love doing panto for the same reason I love doing Joseph, because you get an amazing audience response and it’s such fun and so entertaining.

Is this your first big tour and what are you most looking forward to about taking Joseph around the country?
It’s my first tour ever. I’ve never toured before and I’m really looking forward to it because I actually haven’t visited that many towns and cities in the UK and Ireland. It will be amazing to see all these new places, get to know them better and sink my teeth into the role even more. We did it for ten weeks in 2019 and just shy of ten weeks at the Palladium last year, and it almost felt like that as soon as we were getting into the groove the run was over. Now we’re doing eight months on the road and it will be so rewarding to throw myself into it for all that time.

Are there any stops on the tour that are dear to your heart?
I did panto at the Birmingham Hippodrome so I’m looking forward to being back there. I was there in Snow White in 2019 and I love the people, the Hippodrome is beautiful and the audiences go wild. There are a lot of places I’m excited to see, like Blackpool and Glasgow. We’re closing the tour in Edinburgh and I’ve heard the theatre there is amazing. It’s also going to be really interesting to see how different audiences respond to the show in different places.