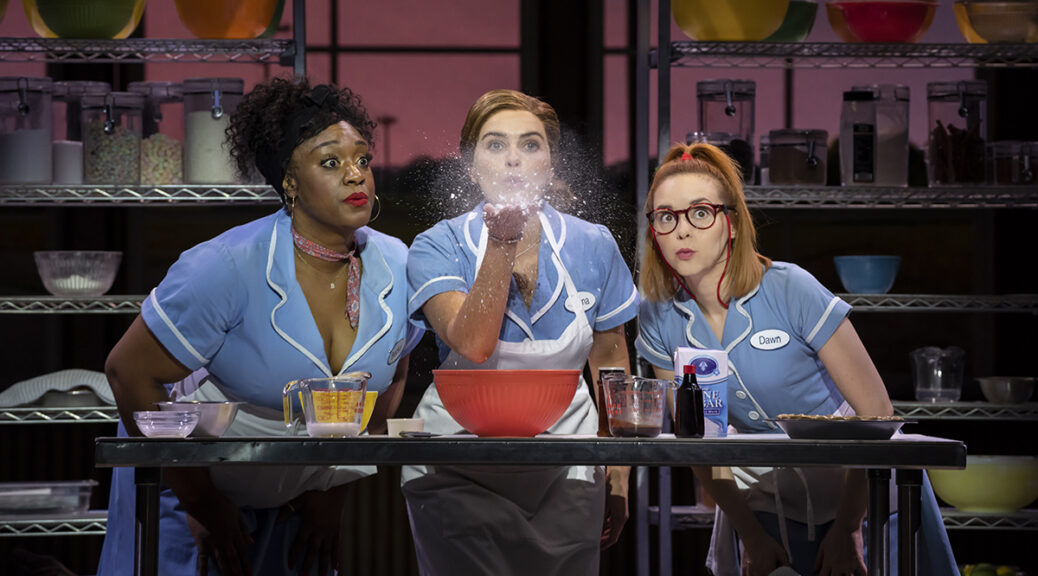 Book by Jessie Nelson, based on the motion picture written by Adrienne Shelly

Waitress – was this afternoon tea with champagne at the Ritz or a slow morning at Sloppy Joe’s café?

Diane Paulus’ feel-good optimistic musical kept me engaged for the whole evening being consummately acted with excellent choreography and set design.  The leads, Jenna (Chelsea Halfpenny), Becky (Wendy Mae Brown) and Dawn (Evelyn Hoskins) had great chemistry and while they all sang well, Wendy Mae Brown’s was the stand out, powerful voice.  The score added plenty of phase and change to proceedings and the seamless transition from one set to another with well-timed choreography was dizzyingly effective.

When the play was first produced on Broadway in 2016, it had, most unusually, an all-female creative team and the nature of the story has an agenda to suit.  It tells the story of Jenna, a waitress who is a talented pie maker.  She is trapped in small-town America in an abusive relationship with little prospect for betterment.  She becomes pregnant and is seemingly destined to experience the perpetuation of the line of chauvinistic, misogynistic relationships that have oppressed women down through the ages.  Like mother, like daughter.  Then she meets her gynaecologist (David Hunter) and is able to sample what life could have been but she is caught in a tryst that can only bring danger to her and the baby in the future.

Her saving grace is the supportive network in her place of work, in particular her best friends, Becky and Dawn and the owner of the diner, Joe.  In viewing the friendship of the three women we are invited to view that sometimes hidden expression of femininity including their sexuality, compassion and ambition.  They may live in an oppressive society, but they can experience fullness of life despite their circumstance.

The male figures do not come out of this play covered in glory.  Some are thoughtful and considerate but they are more often self-indulgent and unappreciative of their partner.  Is it wrong to feel sorry for Earl, the husband of Jenna?  No, not really.  Any abusive, coercive person deserves our condemnation, but he too is a victim of this oppressive society, losing a dead-end job with no hope of change and yet possessive in his love for his wife who then walks out on him on the birth of their first child.  From her perspective he deserves this but he also needs a much better way in life.  If society is to change for the better, it should educate and improve all people.

Does this setting have much relevance to Britain today?  I believe it does.  We have had nearly 50 years of equal opportunities legislation and it is clear that there is more opportunity for women than there has been in the past.  However, it is also evident that gender bias is still deep rooted and profound and there is much work to be done to give equality of opportunity.

While this is a fun night out with plenty to satisfy those that love this story, this is a layered play giving much food for thought.  There was evidence in the audience of the cult following this story attracts which is highly understandable as there is much to identify with in both the play and the characters within. Maybe this is not champagne tea at the Ritz and it is definitely not a slow morning at Sloppy Joe’s.  It is more like a good night out at your local.