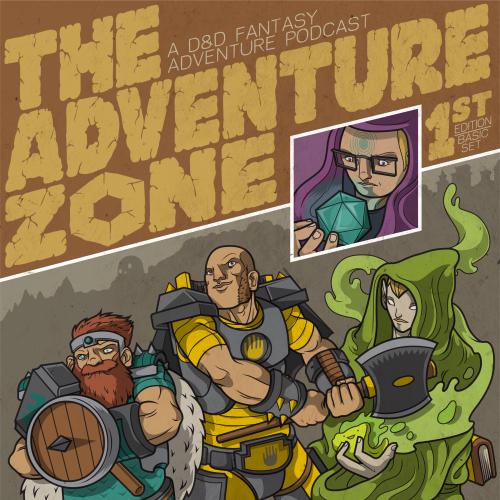 The podcast, The Adventure Zone, has just recently finished it’s first ‘season’, so to speak. This is a podcast wherein three brothers, Justin, Travis, and Griffin McElroy and their father, Clint McElroy, play Dungeons and Dragons (loosely following the rules, as the podcast becomes less about the game and more about the stories entwining the characters they created). It’s a new, innovative, and interesting approach to storytelling which I look forward to seeing progress and become more prominent in the years to come. Although there are other storytelling podcasts (such as Welcome to Nightvale, Alice Isn’t Dead, or other Nightvale Presents podcasts) they don’t include adventure-esque games to propel and support their story. I really liked how the DM, Griffin McElroy, utilised this game and even deviated from it to better support his campaign. A great aspect of using it was a non-imposing introduction to the game. I know that many people don’t have an interest in the game or have a negative perception of it (I did, too), but because the podcast only hinges on it slightly (i.e. for battles or checks in ability, etc) it isn’t distasteful for those of us who didn’t think we’d ever like it. Besides, the elements of the game fall behind eventually, as you’re swept up in the story and with the characters.

The story itself is incredible. It’s something I can’t quite describe without pouring out the whole plot and every little secret and nook and cranny of the intrinsic campaign. But, without a doubt, it is the most enthralling and attention-grabbing story I’ve ever lived through. The end even includes wonderful closure (and a long “where are they now?” segment which soothed me spectacularly. Closure in stories is always wonderful, neat little bows to end a story and give it that perfect finish is something I always have, and always will, appreciate).

I don’t think I could begin to describe the staggering depths of my genuine love for this podcast, story, and characters. I don’t think any words I might have in my mouth could tell anyone about what it means to me. The simple fact that I could listen to this podcast in bed and picture it so vividly and individually unfolding before me was the most wonderful thing, that fit me to a T, and made it that much easier, is the closest I could get, so at least people can know how I came to love it, and so maybe they could, too.

Aside from the main three characters, there were a multitude of NPCs I shamelessly fell absolutely in love with. Even better, as the finale reached its conclusion, the brothers McElroy and their father were sure to include as many as possible, and the thrill of seeing old favourites sparked anew is irreplaceable and always feels amazing. The lengths that these four went to to simply include as many characters as they could to make others happy to see their return was phenomenal. I’ve never seen creators so open to their fanbase, and so willing to listen to them, too. They were considerate at every corner of this story, and that’s something I look up to. Some of my favourites is Angus McDonald (a young boy detective), Lucas Miller (a scientist), and NO-3113 (a robot). I can’t explain them too much without giving things away, which I really want to avoid doing, just in case anyone does decide to start up and listen to this podcast, but these characters, among others, are

The Adventure Zone even incorporates a fully-fledged soundtrack (https://griffinmcelroy.bandcamp.com/ / https://soundcloud.com/griffinmcelroy) which is honestly incredible, and something I love listening to in my day-to-day, or on my commute. I’m listening to it right now, as I write this.

I was waiting for the arc of The Adventure Zone to fully wrap up before reviewing it, and now that this part of it has ended I’m equal parts happy (so happy, it was such a thrill, I’ve never loved a story so much) and sad (I’m going to miss this arc and these characters a tremendous amount), but it is, honest and truly, one of the best podcasts out there, I think.
More technical information can be found at: http://mcelroyshows.com or http://www.maximumfun.org/shows/adventure-zone and this can also provide a place to listen to the podcast. It could also be found on iTunes/the podcast app on Apple phones, or anywhere else podcasts can be housed. I gave it five stars because I can’t recommend this podcast enough, I enjoyed it so thoroughly and so heartily that every day I am immensely grateful that it was brought to my attention. I don’t think I could ever sound objective about this podcast no matter how hard I tried because it just swept its way into my heart so easily and so strongly, and I’d let it every time. It’s good. That’s all there really is to it, for me.

I will say, in case anyone does pick up this podcast, the McElroy’s voices are hard to distinguish as first (or at least, I struggled at first), although it does get easier. However, I didn’t want to waste time listening to a story-based podcast and being confused and missing crucial start-up points, so, I recommend listening to a few episodes of the McElroy brother’s podcast, My Brother, My Brother, And Me first (http://www.maximumfun.org/shows/my-brother-my-brother-and-me) as to avoid this issue.