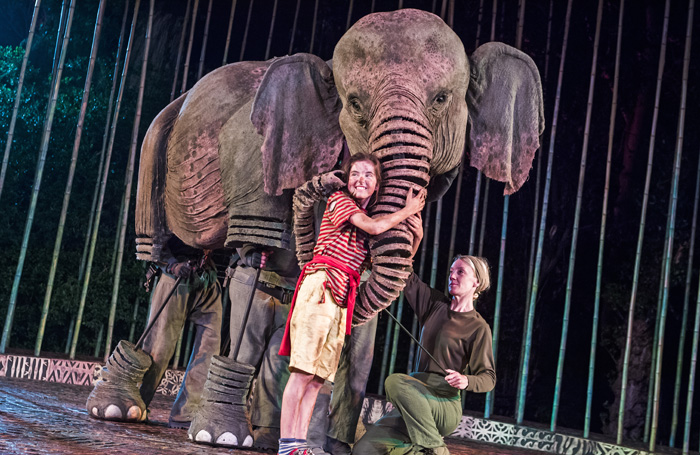 Let’s start with a bold but true statement – Michael Morpurgo is one of our country’s literary geniuses. From World hits such as War Horse, from book to stage and film, Running Wild seemingly is following suit with such success and ingenious theatrical approach.

Running Wild sees the modern day tale of a young girl, on a trip with her mother to Indonesia after the death of her father, who finds herself lost in the jungle after a natural disaster and help of a beach elephant; along the way meeting new animal friends and facing terrifying situations. This tale sees the growth of her and her developing relationship with her family, both those alive and passed away as well as making bold and blunt points about human destruction of nature.

The narrative itself is well formed, in a way relatable in the sense of love and loss and pulls at your heartstrings constantly – whether this is with relation to her passing father or the bond she makes with her new animal friends. A tale that, like War Horse, has taken a lot of perfecting and trust in theatrical ability from actors to puppeteers, stage and lighting technicians to designers – the collaboration from all involved syncs this production well and seems perfect for the stage – as if Morpurgo wrote it for theatre.

Like War Horse, which coined the large puppeteering techniques used, the animals are to size and travel the stage in a very lifelike manner – the puppeteers making sounds and at times many controlling different parts of an animal, made this all seem very lifelike and by getting lost in this, you forget that the puppeteers are even there. As someone who has been up close to a real elephant, the detail and natural/lifelike nature of the animal was on point and extremely real. Obvious time and investment in the research and performance is abundant and really makes the difference for the experience.

To agree with the modern day story, Running Wild is modernised and at times takes on a ambiguous and alternative lighting, staging which creates another difference in the two productions – Running Wild is not just a carbon copy of War Horse and its techniques, but its own incredible production. The set itself gathers understanding and sense – a stage covered in random objects then compliments the natural disaster and the destruction from this that occurs. The puppeteers bringing out rectangular harsh lighting to represent the unusual environment while the girl and elephant run through the jungle and a big favourite of mine, moveable trees with fruit represented by shower luffas to add to the nature vs human element.

And finally the performers – from actors to puppeteers. Some puppeteers doubled up as actors, and some took on several characters and puppetry. To invest the performers in all elements adds to the great understanding they have with the storyline and at no point was concentration, energy or enthusiasm lost in either/all performances.

Running Wild is by far a triumph. Following in War Horse’s footsteps in some theatrical elements, there is, however, no competition; both performances are perfected and in their own right, theatrical perfection. Running Wild not only makes you well up in happiness and sadness, create shock and fear, comfort and protect you, and make severe points of modern human impressions on nature, but it manages to get you lost in the jungle with all your new animals friends. 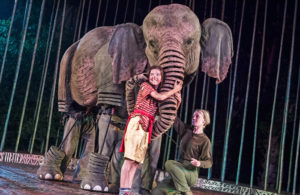