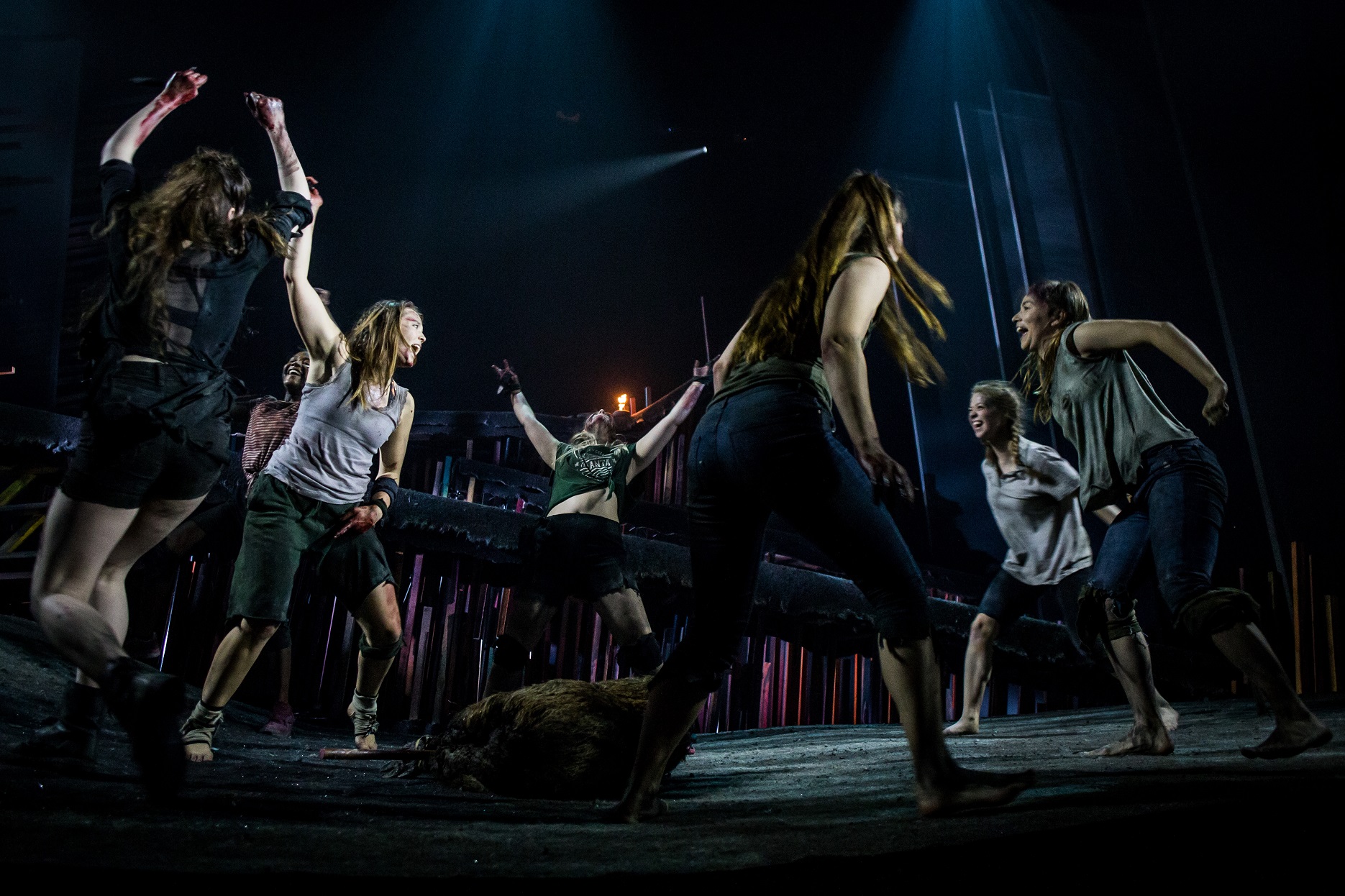 The all-female cast of Lord of the Flies, a Theatr Clwyd and Sherman Theatre co-production, may have caused a stir in some quarters. But, for me, it’s actually one of the least interesting aspects of the production. This adaptation of William Golding’s 1954 novel translates the characters from page to stage seamlessly. It is their unique and distinct personalities, and the interactions between them, that fascinate most. The gender, as well as race, of the actors on stage very quickly becomes superfluous. I hope that, after all the hype and controversy, Jodie Whittaker’s introduction as the 13th Doctor next week will have a similar effect.

Director Emma Jordan has chosen to explode this production onto the stage. Sitting comfortably in my seat, the sudden detonation of light and sound to begin the play made me jump out of my skin. It was terrifying. Yet the exhilaration was equally palpable. It doesn’t take long for the characters, stranded on a desert island after their plane crashes, to establish themselves in the minds of the audience. The sensible Piggy (Gina Fillingham), the humble Ralph (Lola Adaja), and the vitriolic Jack (Kate Lamb) are as familiar here as they are in the pages of Golding’s book. Nigel Williams’ script remains relatively faithful to the novel, whilst condensing the action into a tightly-framed two hour performance. This means that the narrative skips along nicely. Yet the big moments still have plenty of room to breathe, resulting in some dramatic scenes that ooze tension and leave tangible space for reflection in their wake. 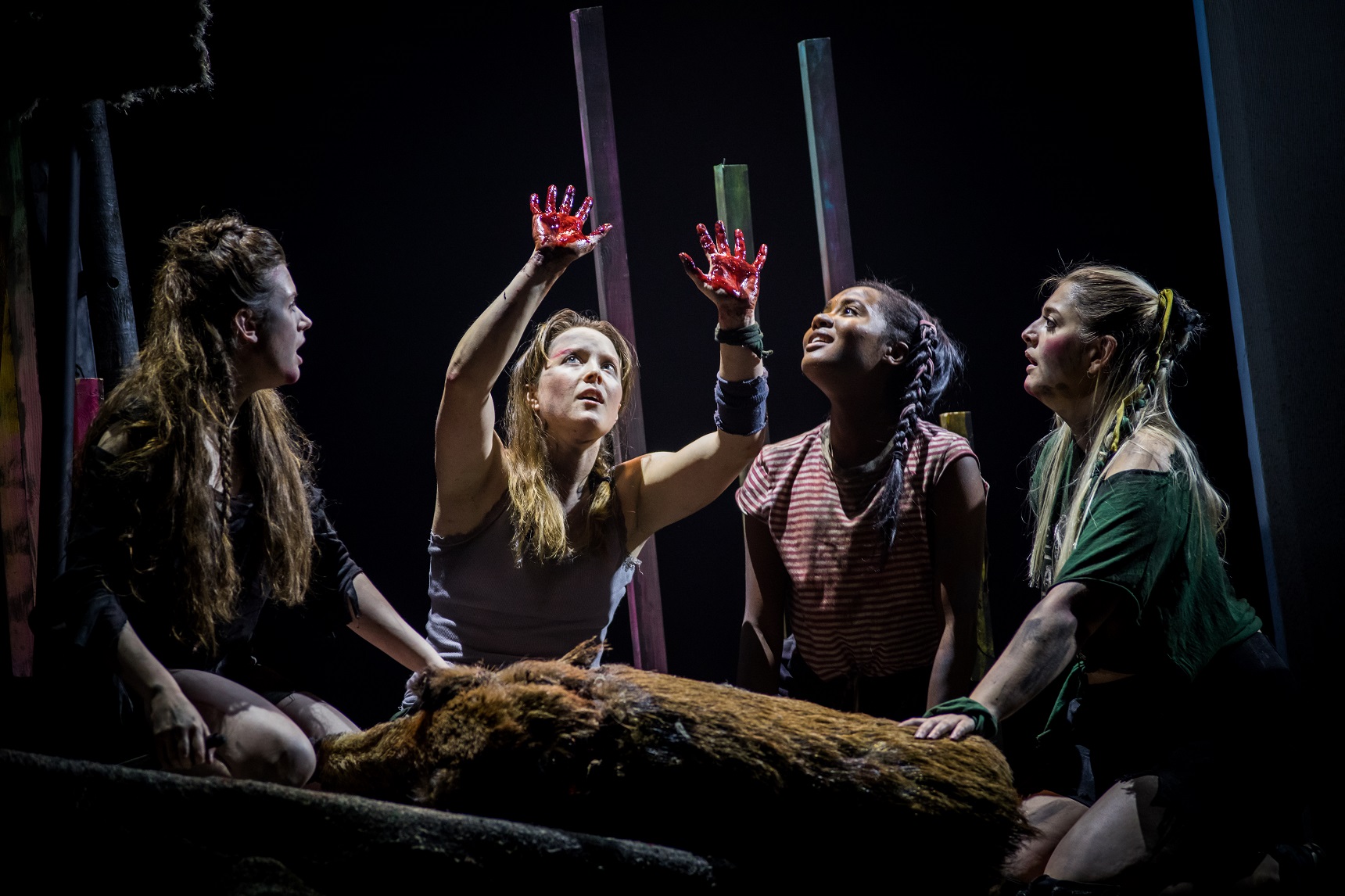 Far removed from her lovely persona as Delia Busby in Call the Midwife, Lamb seems to relish the role of Jack. The harsh delivery of her early criticism towards Fillingham’s sweetly amusing Piggy makes her character instantly dislikeable. Lamb appears at pains to place her character as the central antagonist through her brash and bold movements alongside the venomous verbal outbursts contained in Williams’ script. Such characterisation presents a confidence and commandeering that translates itself into a vision of leadership that can seem right and proper. It is in stark contrast to the pragmatic Ralph, played by Adaja. Her presence is less about physical flare. Instead, it is a more contained performance that sees the character wrestling internally with conflicting ideas and sentiments. This is conveyed brilliantly by Adaja through far more subtle movement than we get from Lamb. Combined with more strain and staccato in her vocal expression, Adaja demonstrates both the humility and self-doubt that lie at the heart of Ralph. This makes her, to all intents and purposes, a far more qualified leader, in my view. Yet this is a vision of leadership that is so often judged as weak and ineffective. The dynamic between these two, very different characters is, I believe, of huge relevance today, not least in the context of local, national, and global politics. 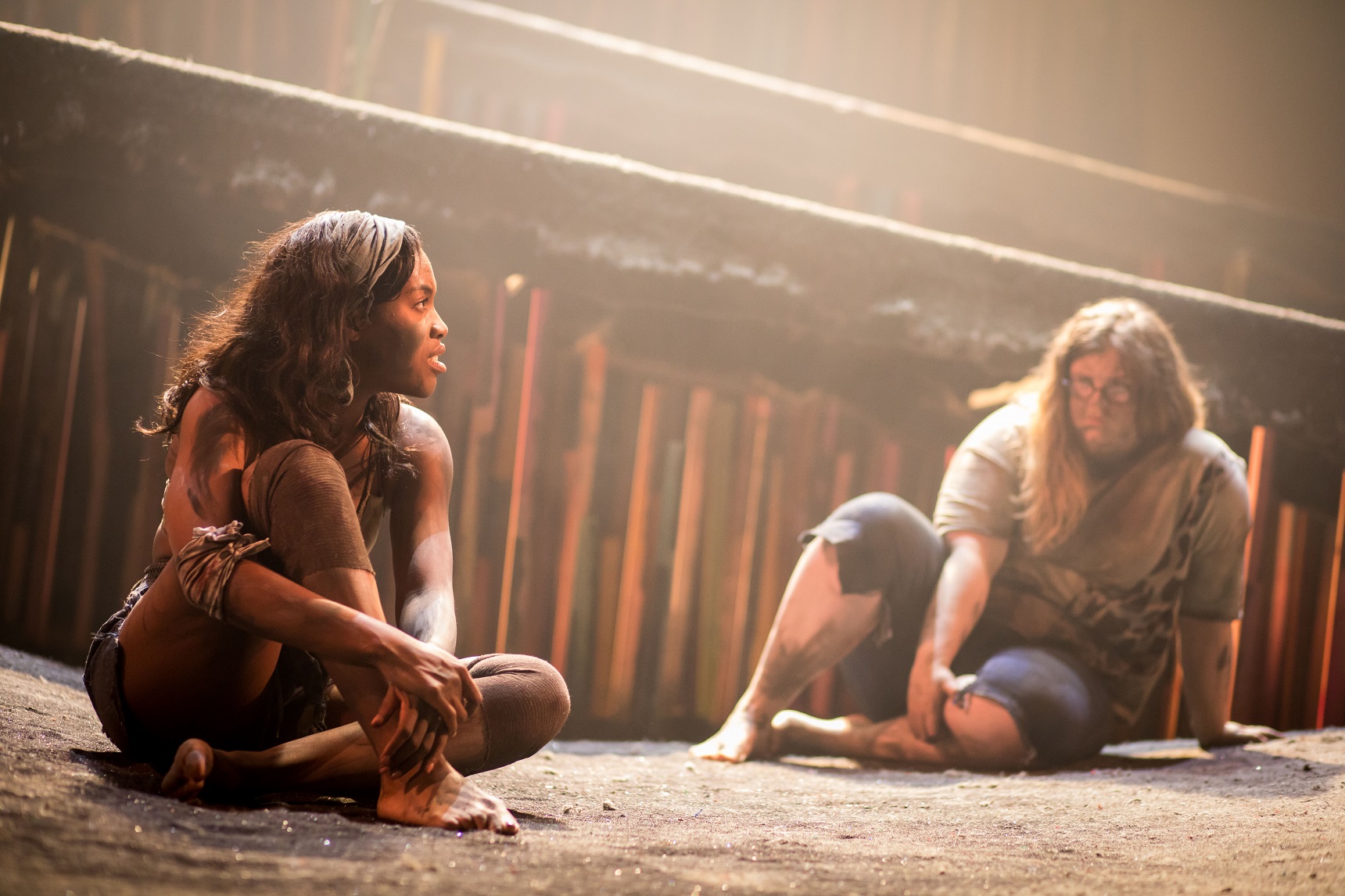 When I encounter Lord of the Flies, it is the use and misuse of power that fascinates. It is a theme that goes beyond gender. It speaks of the human condition. Therefore, to argue that changing the gender of the characters is problematic is, in my opinion, nonsense. Not that it is completely irrelevant. After the show, I overheard one female audience member comment that girls can be just as savage as boys. Would this observation have been made without the female-only cast? To offer an alternative (female) perspective, one that still remains sadly lacking in contemporary theatre, is important. But it is by no means one of the main reasons why this production is worth seeing. It is worth seeing because it features a very talented and dynamic cast who work brilliantly together to create an engaging and interesting adaptation of Lord of the Flies. Add in some well-placed music and very effective use of lighting and it makes for a bold and challenging dramatization of a narrative whose themes still resonate strongly today. In the end, this is simply a great story, well told.