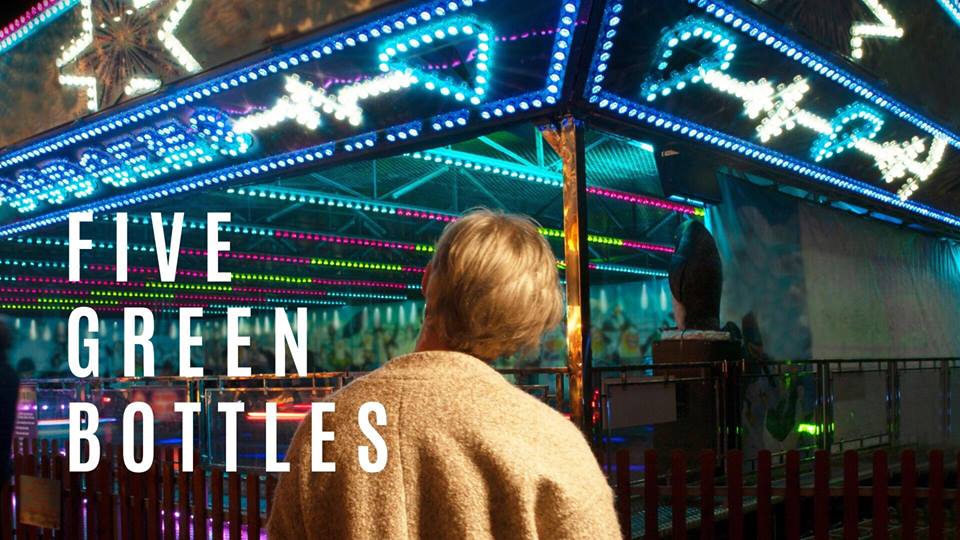 Five Green Bottles by Joe Wiltshire-Smith debuted for the first time at the 2018 Cardiff Fringe Festival in the basement of Little Man Coffee Shop. After seeing it then, I remember saying, “this is the sort of work I’d expect at the Sherman.” And less than a year later, here we are.

It’s a strange experience watching this play for the second time. It relies so heavily on its audience not knowing the twists for its strengths, so for that reason I won’t be spoiling anything.

One thing that has changed is the ending, which is just as frantic, but slightly clearer in a subtle way. This is the major improvement along with the obvious production value that the Sherman’s excellent studio space offers.

The direction from Becca Lidstone is particularly interesting as she adapts from a coffee shop basement with a small amount of tech to a world-class theatre space. The step-up in production value is obvious – but the content of what was initially presented isn’t lost.

It does seem darker and more sinister than before. I’m unsure whether that is because I know what is coming and pick up on the small details or if it’s an artistic choice, but it works.

One thing that is noticeable is the cutting-down of humour. The first time there were more laughs and that could be down to the intimate space of Little Man’s basement. However, it comes across much more mature as the humour is controlled perfectly by Lidstone and doesn’t dominate as much as before.

Becca does a great job of starting the play at face-value and allowing the subtext do its work, bubbling under the surface to create a darker tone.

The transitions are full of dance and music which contrasts nicely to the dark undertones and creates a feeling of the 60’s. At times, though, this feels a little out of place, particularly as the play progresses.

Aly Cruickshank’s performance is excellent. With a name like his, and the accent he puts on, you would think he’s a Scottish native. His performance really stands out as he presents himself as likeable but holds a manipulative presence that makes him so hateable.

Angharad Berrow is also utterly brilliant. Her performance is less sinister than Cruickshank’s and comes across really naturally. Berrow handles her character with great detail and performs delicately with moments presented as normal that are truly horrific in the context of the play.

Tobias Weatherburn’s performance is really understated, cold and transformative from the person he is off stage. In particular, the way he handles Dave’s insecurities and desperation for acceptance from other men is phenomenal.

Olivia Martin’s performance is interesting. Her character, Maureen, is snide and laid back. She mostly holds the same dynamic throughout, but the moment she switches is even more powerful for this.

The set from Ceci Calf is really nice and naturalistic, taking us into the 60’s with simplicity.

Garrin Clarke’s lighting design is great. The single light that shines through the window, as if it were the moon, is particularly lovely and the changing of colours is seamless, creating the perfect atmosphere for the moment.

The sound design from Nick Laws is also strong, the use of music in the transitions set the scene and there seems to be a slight distortion in said music as the play progresses which is subtly superb.

The script by Joe Wiltshire-Smith is meticulously plotted and paced with great dialogue, moments of humour and a subtle, dark undertone.

None of the characters are supposed to be likeable, which is important and a good choice, but they do need redeeming or relatable qualities. Dave stands out and is instantly recognisable with clear insecurities which Aly Cruickshank’s character, ‘Neddy’, exploits. Dave’s shielding of himself provides a brilliant and bubbling conflict with ‘Neddy’.

Unfortunately, the same can’t be said for all of the characters. This is where we come onto the main issues of the play. The character of ‘Neddy’ and the purpose of the play.

Neddy’s process and mind are not explored enough, so whilst we see his manipulation of other characters mould slowly and sadistically, his actions by the end are not justified in his own twisted way. This leads to the ending falling somewhat flat and into the second issue.

Why has this piece been written? What does it offer its audience? What does it explore? It doesn’t offer clarity on the history, it doesn’t explore the issue nor the mindset of the characters and isn’t escapism. It’s not a character study and whilst it is well written, directed, acted and designed – after all is said and done there is no takeaway for the audience.

The conversations I had after the play ranged from talking about the historical facts and questioning the purpose of the play. I’ve seen technically worse plays that are much more ‘must-see’ because of what they offer their audience.

Ultimately, this is an incredibly brave story that Joe Wiltshire-Smith has attempted to tackle for his first full-play. For Spilt Milk too. However, there just doesn’t seem to be a focus or point to the piece.

Some will disagree on this and say it doesn’t need a point or to explore anything. But, that is what separates ‘good’ from ‘great’. A little more focus and this could be an absolute stellar piece of theatre. As it is, there’s just something missing.

Five Green Bottles is an enjoyable, brilliantly crafted piece of theatre only let down by a slight lack of purpose.