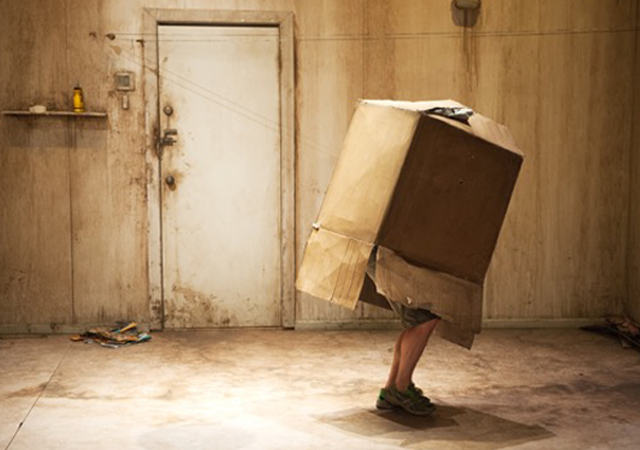 Back into the underground bunker of The Bikeshed Theatre, this week sees the company Ridiculusmus who have been bringing funny yet thought provoking theatre to venues such as Battersea Arts Centre, Soho Theatre, Barbican, National Theatre, Royal Court and The Arts House, Melbourne for around 20 years.
Artistic directors and performers of this piece Give Me Your Love, Jon Haynes and David Woods take a look at PTSD (Post Traumatic Stress Disorder) within a former soldier of the most recent of wars in Iraq, basing this in West Wales. They take a humorous look at this condition but filling it with strong metaphors which in balance work well to really make us think about the disorder.
The majority of the 1 hour show is mostly purely a conversation between Zach who is in a cardboard box, for his own safety (or so he believes) and his friend, Ieuan, and occasionally his wife Karen. With all of these characters, we never see their faces. Karen is in a different room shouting through the wall; Ieuan Is trying to get into the room through the chained door, his only presence represented by his speech and his hands/arms peeking through and of course our main character, Zach, is always in the box. This interesting take on theatre is brilliant and simplistic. It takes a lot within creation, writing and the skills of the performers to be able to bring such comedy, the issues and pure emotion to an audience without much physicality or facial expressions. The narration is great; it is as if the characters are having a simple chat, going back to the issue at hand but occasionally having a moment of off topic interaction. Somehow this makes the unordinary visuals seem very naturalistic – with Welsh accents as well, are perfect and I guess with the sing song nature of the Welsh accent, adds to the humour.
Taking my parents, we later discussed how clever and important this piece of theatre is, and whether the performers themselves were Welsh as they seemed to be on point with Welsh humour. I do wonder whether some humour was lost a little on the audience as it did touch upon things that we agreed may be more comical to the Welsh or those familiar with Welsh culture and humour. Despite this, there was plenty of comedy and strong emotional moments that visibly effected the audience in obvious ways.
Give Me Your Love is such an important production to see – Zach is seen to say that he has put himself in the box – and while this is represented physically, it also has huge representation to how we see PTSD ourselves. How society coaxes suffers into this one box and not taking in that each person is human and different. If you do not get a chance to see this production, so many emotions and thoughts will be starved of its theatrical influence.
http://www.ridiculusmus.com