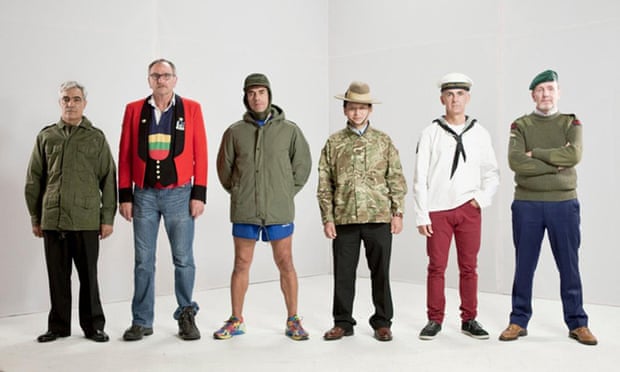 Up in the circle, viewing down onto the stage, a masterpiece is about to unfold.

What looks to be a simple set up – a big double screen, as if a cube had been cut in half, a drum kit, some guitars, a desk, costume rack and a camera. A simple yet welcoming stage to the mountain of feeling, expression, truth, fear, sadness and joy that is to fill this theatre.

Minefield, as part of the ‘On the Move’ series for Lift festival (an international theatre festival) takes veteran’s from the Falklands war, from both Britain and Argentina and brings their experiences of the war and compares one to the other. Bringing two enemies against each other on stage sounded like a dangerous and taboo thing to do – these veterans came as enemies and left as friends.

For ordinary men who are simply telling their story, their musical hobbies are used to bring an interesting element to the show. When you see a documentary on TV, there is some background music to parts and this was like a live documentary in front of our eyes- the talented veterans providing the ‘scene change’ music and showing who they are now is clever and shows more to them as people than just soldiers, marines and naval officers.

Multimedia was used throughout bringing new dimensions to the production. We had translations in both English and Spanish depending on who was speaking – despite one or two of the Argentinians being able to speak English, the majority of the performance was kept in mother tongues which gave a sense of nature and respect of cultures to the piece. A camera zoomed into performer’s faces, souvenirs and tangible memories for us to see more of; background video and animation was thrown up on the big screens – we were instantly brought into their lives and privy to their secrets.

The men were treated as performers-they provided their own soundscape using voice, breath and bringing objects together; they played different characters , interacted and trusted one another in their performance, put their truth on the line and respected one another for this. These men provided some of the best performance skills and techniques I have ever seen, and they were not trained or necessarily theatre fanatics as most performers in the industry are meant to be.

Perhaps the truthful and hard hitting stories, coming from the people themselves brings out the real performer and the real enthusiasm to portray not only their own but each other’s lives. It was evident that great friendship had been made and this made for the performance to run smoothly, cleverly and to make you think.

Ending with a full band featuring all the ‘cast’ singing and playing a rock song with lyrics relating to what soldiers do, the bad, nasty and the ugly. Rhetorically we are asked ‘Would you go to War? Would you?’ leaving us questioning ourselves to whether we would after hearing the reality that was not shown in the press.

I know what I would reply after being asked this. But what I ask you is, why wouldn’t you go to this production? As rhetorical as they ask their question, there is no answer needed and no doubt that you should.