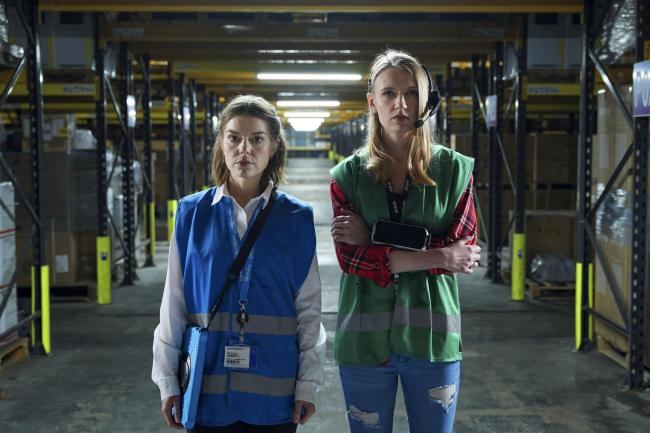 The first thing to say is that nobody dies. Yet that is hardly a ringing endorsement of the working practices on show in Life and Death in the Warehouse. The BBC Cymru drama lays bare the secret world of online distribution centres. And for anyone used to the quick and easy clicks of internet shopping, this is a must-see to make you think twice before placing your next order with Amazon. It makes for hard-hitting and eye-opening television. This is the worst of consumer capitalism.

Megan (Aimee-Ffion Edwards) has been accepted on a fast-track graduate scheme at her local centre. Becoming a trainee manager, she is tasked with ensuring that her team of workers keep up to speed with their daily ‘pick rate’. She is required to monitor their movements constantly via CCTV, praising those who exceed the target and calling out the ones who fall behind. Childhood friend Alys (Poppy-Lee Friar) becomes one of the latter when she confines in Megan that she is pregnant. Instead of receiving assistance and the appropriate support however, Alys is subjected to a ‘personal enhancement plan’ that remains fixated on the numbers at the expense of her health and wellbeing. It is hard to believe that companies operating in 21st Century Britain would treat workers in this way. Yet as it declares from the outset, “This film is inspired by hundreds of real stories”. To say it is shocking then is an understatement.

Director Joseph Bullman ensures that there are plenty of close-ups, with the majority of shots trained on the faces of the actors to capture the intensity, pressure and emotional strain that their characters are under. It means that their environment is pushed right up against the screen. There is no getting away from it. We become embroiled in the ideology of this high-performance workplace, not only witnessing its effect on Megan and Alys but being subjected to it in some way ourselves such is the visceral nature of the storytelling. Edwards brings an incredible vulnerability to her role. She is at once very different from her infamous turn as Esme Shelby in Peaky Blinders. Yet in spite of her obvious nerves and eagerness to please, there is something of the steeliness of that character that seeps in as the drama progresses. It becomes a negative force in this instance however, used to block out a compassionate and caring side to Megan in keeping with the ‘customer-fixated’ culture that she finds herself trapped in. Friar, for her part, puts in a noteworthy performance as one who experiences the most extreme impact of that culture. The gradual decline in Alys’s physical ability to undertake the tasks at hand, and the increasing level of stress she finds herself under, is acutely felt, in part due to Friar’s concentrated effort to keep her character’s emotions in check against a backdrop of sustained bombardment under which the exhaustion, tears and pain slowly to show.

In a sense, both of these characters are subject to the injustices of a system that exploits, dehumanises, and almost kills them. The obsession with media PR over and above medical concern for an employee is but one unbelievable instance that breeds anger in the heart of the viewer. To understand this as reality takes some coming-to-terms-with, not least in the face of the preposterous responses of the management team. Yet Craig Parkinson (Danny) and Kimberley Nixon (Donna) play their roles with such deliberate ease that the manipulation and false empathy emanating from their characters’ intentions becomes entirely plausible. It makes one very aware of the insidious nature of language; and how it can creep unsuspectingly into relationships.

Life and Death in the Warehouse brings us the best in factual drama. It shines a daring light onto the unseen but now-necessary world of warehouse workers who are at the coalface of our online purchasing habits. It finds the companies who ‘employ’ them, “Some… you will know, others you won’t have heard of”, seriously wanting. Bullman directs in the same unrelenting way as he did with its predecessor, The Left Behind. Meanwhile, Aimee-Ffion Edwards and Poppy Lee Friar lead a superb majority-Welsh cast in depicting the dark side to our unrelenting consumerism. It should make us pause a moment and take note. It should even make us turn to look for something better. It shows that the rights fought so hard for in the past are in danger of so easily slipping away.