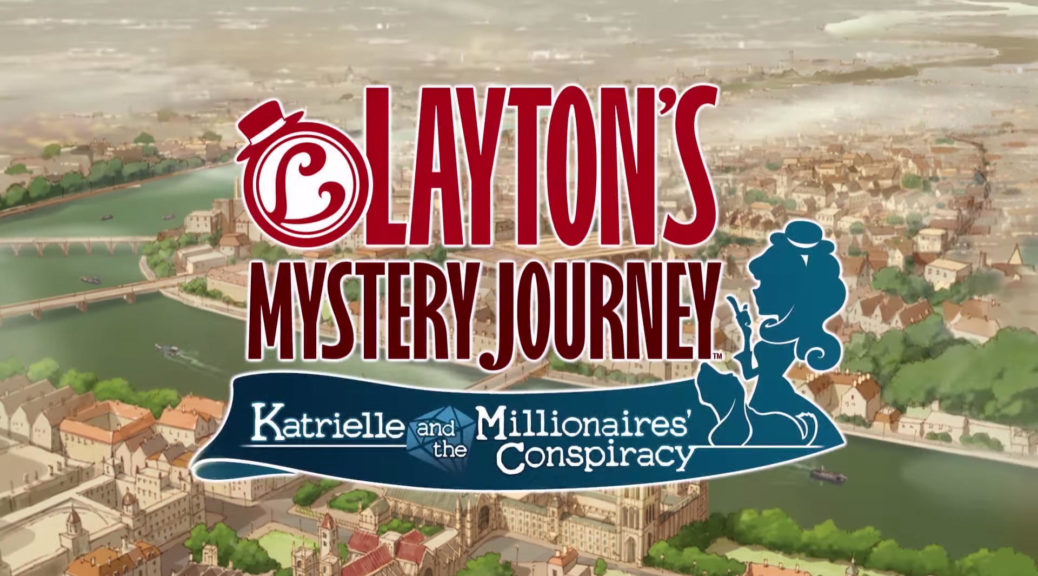 As far as anyone was concerned this time in the last two years, the Professor Layton series was over. There were games and a movie and a book, and then it was finished. I remember how I felt the day some concept art snaked its way on to my timeline, and how incredulity and unimaginable excitement swelled in me: my absolute favourite series was still going. Some higher ups had decided not to leave us all the way that they had. How could I not be beside myself with utter glee? How could me, my friends who I met because of this series, how could we not let ourselves be absolutely encompassed by this incredibly lucky turn of events? We were so happy. I was so happy.
Layton’s Mystery Journey follows Katrielle Layton, Professor Layton’s daughter as she opens her own detective agency and solves a number of cases for London’s elite millionaires – the “Seven Dragons”. What I also thought was going to happen was throughout these cases, Katrielle would undergo the ongoing case of her father’s disappearance, since this is what I’d discovered was the #1 talking point whenever I looked into the game. “Professor Layton is missing! Will his daughter find him?” I thought she would.

As a series that existed differently to the previous Layton games, I obviously expected change. A new cast, new voices, new music, new scenery. I knew it was coming, so when it arrived there were no ill feelings between it and me. Much as how people say, “The movie would be good on it’s own” when the book was better but the movie was… okay… I can say that if this series didn’t have links to the older version, it would have been okay – it would have been good on it’s own. In some places it was even nice – to see things newly imagined. But my view was always going to be rose-tinted because of the old games, so I was helpless.

Some things were good. The music was good, but Layton music always has been (here’s a taste of this game’s music! : https://www.youtube.com/watch?v=4czbYlei3GY&list=PLVfglvX_VlEZniKUW5NEcdC_yaK6CipuV ). The puzzles were okay (since after all, it is a puzzle game), and I do appreciate that they existed as a tribute to the person who used to make the puzzles for these games, Akira Tago (1926-2016).

There was one character I did really love – Pipper Lowonida, the fictional Mayor of London (pictured on the right, below). She was the first character I saw! The concept art that found itself on my timeline was of her, and I always thought I’d like her. I was right! She’s the Mayor, but with a flare for festivals and parties, and with a happy and witty attitude. She was the best part of the game for me.

So, there was some good things. Not many, though, because now I have the chance to get into what really got under my skin.

This is something I realised a few weeks ago. I found myself less excited for Layton’s Mystery Journey as some of the other people I new. I thought maybe I had exerted it all too early, I thought the funny little online puzzle game (http://www.layton.jp/mystery-journey/laytonworld/uk.html) had depleted it (since I never finished it, and fell out with it just after it began). But, nope! It was something else entirely. I found myself reflecting on the prequel and sequel trilogies of the original Layton series, I found myself thinking quietly on how I loved their plots and characters until I stumbled on a big flaw. Lately with media I have been more than a little picky. Representation and mature story handling has become incredibly important to me, and I realised that the Layton series actually wasn’t ticking any of my important check boxes. Representation in terms of race? It wasn’t happening. Representation in terms of sexuality? Also wasn’t happening. In the original series there was one character who didn’t appear white – and he turned out to be a bad guy (bad move! Especially when this was the only non-white character of an entire series consisting of 7 games and one movie). This carried through into Layton’s Mystery Journey, unfortunately. There was one character who appeared non-white, yet his name was “Shadee” (it’s exactly what you’re thinking), and he was the main culprit of a case that our main characters were pursuing. They were pursuing him harshly, treating him badly, and didn’t apologise when they realised he wasn’t the culprit. (Bad move! It’s 2017 for goodness sake, show some compassion).
There’s also no representation when it came to sexuality. Heteronormative things came through easily in the past series (marriage, nuclear families, a young girl who gives a young boy a kiss and everyone in the vicinity giving each other those knowing looks even though the two kids in question were 11 at best), and this new game (the sidekick character, Ernest Greeves, is blatantly infatuated with the main character Katrielle. She doesn’t notice, and when she doesn’t another character is compelled to say things like “throw him a bone”, “give him a chance”. The problem I have with this is: Girls should not be prompted/feel obliged to appease a man just because the man in question has feelings for them. They shouldn’t have their independence and potential character growth thwarted just because a man has shown up and shown interest). Nothing about characters who weren’t straight, even though it is 2017. It’s disappointing, realising a series you love will not break the safe and traditional mould.
The last point? Every single plot of every single Layton game – and the movie – exists because of women’s suffering. This is a trope I do not at all like: “Woman gets hurt to unlock a man’s story”. So over the ten years that Professor Layton content has been being produced, it’s been the same story: a woman is hurt, somehow. A man’s story comes into existence because of this. So that’s all 6 original games, the crossover game, the movie, and this game! That’s bad. 9 times, a company can’t break from this storytelling? For ten years a company will keep themselves glued to this harmful storytelling? As the times change and representation and better treatment of female characters is needed and they do nothing? Yeah, I’m not exactly happy.
For this game, and for a long time, I really did not think they were going to fall into this trope. But they did, and it was right at the very end of the game. Turns out the bad guy was only propelled forward into taking the actions he did because his mother died. For this game I thought that, what with a new female protagonist, Level5 (the company behind the series) would be shepherded into treating their female characters better, but no. They don’t. They even forgive the antagonist, and move on like nothing ever happened. A white male character isn’t held accountable for his actions, but an NPC who appears black is lambasted endlessly through the case and treated poorly even if they did nothing wrong? I’m disappointed, massively so.
Continuing from that, here’s another of my big issues for the game: it is, as far as I’ve seen, hinged on the premise of “Professor Layton is missing – will his daughter, Katrielle find him?” And here let’s get into some big things that really made my blood boil: They barely mentioned this in-game. They barely talk about how the professor is missing, and when they do, it is off-handed mentions, vague information, and a flippant way of injecting it into the game as if no one really cares that this is the “overall plot” people were expecting. So, no, if you’re wondering, they don’t find the Professor. They don’t even look for him. There aren’t even hints throughout the 12 cases of this game that they plan on searching for him. Which is, let’s face it, a disappointment. I don’t know why advertising seemed to encircle this and then they go ahead and barely use it. I can understand that it’s likely to set up for a second game (which I don’t think I’ll be buying after my revelations and experiences with this game), but really what it felt like was laziness. A lack of a want to finish a story they led people to believe would be solved for the sake of making more money on the next instalment. Worse, they hinge a cutscene at the very end of the game in the post-credits, where it’s revealed that the main character, Katrielle, may not even be Layton’s daughter. She says she has solved the riddle Professor Layton left her (“If you’re not my daughter, then who are you?”). Some people took this as a good cliffhanger, but I took this as a slap in the face and the regrettable loss of £33.

I didn’t like it. Others may, and that’s fine, but Professor Layton content is no longer my cup of tea. I didn’t enjoy it and eventually trudging through playing it started to feel like a chore. Obviously I’m sad, I waited so long for this and was so excited and now I’m shrugging off a franchise I’ve loved for ten years. Hopefully this is better for me. With the fall of this, I just hope I can find better content I can throw myself into as deeply as I did this. Overall, I’m massively disappointed. One star.