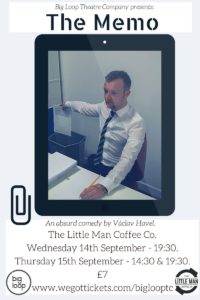 If the aim of ‘The Memo’ performed by Big Loop Theatre Company was to do a great performance then they certainly nailed it.

The memo is an adaption of ‘The Memorandum’ written by Czechoslovakian writer Vaclav Havel. Even though the play was written in 1965 it is still captivating for a 21st century audience. Produced by Rachel Pedley-Miller and Directed by George Soave they definitely chose a great group of actors to perform Havel’s classic.

Even though it took a while to get a grasp of the story, once I was in it, I was fully immersed. James Sarson, playing the protagonist, Mr.Gross, kept us engaged throughout, even though he was meant to be top of the food chain in the company it was evident that he had no real authority. His antagonist, Ballas, was the complete opposite. Ballas, played by Tobias Weatherburn, portrayed the arrogance and power he has over Mr.Gross within the character. Tobias’ skill at improvisation when something in the scene didn’t quite go to plan added to the skill he has as an actor. Another element that added to the hilarity of the scene was that James exceeded Tobias in height.

The only other actor who had a single character to play was Rhys Denton who played George the ‘staff watcher’. From the beginning, Rhys was sat in the audience and when he spoke for the first time it was quite a shock. His voice was perfect for the roll and even though his character was minimal he still got many laughs from the audience. The other actors were all double casted and the difference between each character was incredible. Aaron Price playing Mr.Pillar was Ballas’ left hand man, or more like his lapdog. Following orders and saying nothing pretty much sums up ‘Mr.P’. The other character he played, Mr.Stroll, was completely unrecognisable from Mr.Pillar. His whole character had transformed from a shy, obedient follower to someone who owned the stage. This was the same with Elinor O’Leary’s characters, Hana and Maria. While Hana was uninterested, sarcastic and a lover of food, Maria was a caring and helpful character that just wanted to do right by everyone. The audience interaction within Lear and Thumb’s scenes, played by Melanie Stevens and Ash Cummings, was intense yet fun. The audience members that weren’t used to the idea of actors invading their personal space definitely got a bit of a shock. Both characters bounced off each other and the contrast in personalities was amusing to watch. Melanie’s accent for both Leah and Maria were on point, both completely different yet humorous and brought her characters out even more. Ashley’s secondary character, Savant, was the lad of the group, laughing outlandishly and thinking he’s top dog. The contrast from that character to Thumb’s geeky over-excited nature was a delight to see. This was a performance that truly highlighted everyones diversity and their skills as an actor.

The directorial choices in this performance was highly applaudable, the transitions between each scenes, the character choices and the relationships between the characters was subtly hilarious. The sexual tension between Mr.Gross and Ballas in certain parts was just the right amount creating another edge to the story line. Furthermore it was also all the little moments when the timing would be perfect or there would be funny quirks For example when Mr.Pillar would end up sitting on peoples laps.

The only thing that let this show down was the space. The performance was located in the basement of the Little Man Coffee Company in Cardiff. This room can get quite stuffy and is relatively small with uncomfortable seats. Therefore I believe it restricted how far the actors could take their performance and the overall enjoyment of the show. Nonetheless, I would still recommend the show to anyone and didn’t take too much away from the whole show.

Overall it was evident that there was a high amount of professionalism from the cast and crew which resulted in over a two hour show being highly thrilling throughout. Each actor knew their character inside out and it was inspiring to see. Looking forward to seeing what The Big Loop Theatre Company do next. 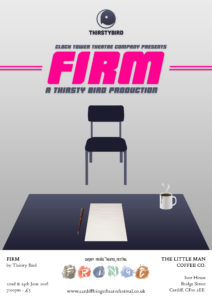 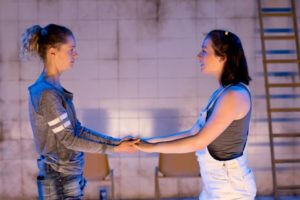