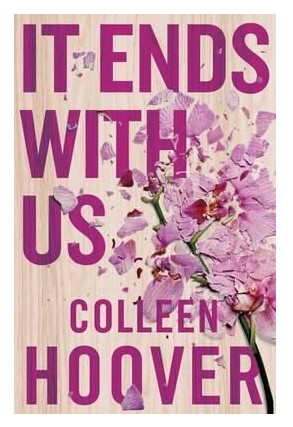 It Ends With Us by Colleen Hoover is one of those books I heard about over and over and over again and kept skirting the edges of to get away from. With her skyrocket into popularity, I found myself jumping through hoops to avoid her work, for no other reason than: I had a weird feeling I’d like it, and because I know she has so many books published, I simply didn’t have the time or money to fall into her work and out the other side, changed.

Then I got paid.

It Ends With Us was the kind of book floating all over booktok, appearing and disappearing in book group posts I would skim read; it was popular, easy to read, and seemingly either incredibly well-liked, or vehemently hated. I wanted to know why. Even when I was actively avoiding it, I wanted to know what it was that was happening to people that their reviews were becoming so mixed.

I thought, when I was reading it, that it would be down to its “chicklit” factor. The book itself being pink, and Hoover being notably a romance writer, I thought people were detesting it because it was a gooey, lovey dovey easy read, and not an absolute draining challenge of some such classic literature you’d find on a university reading list that I’m sure I would hate after half of the first page. I found myself believing this at one point, questioning if something that had so clearly rocketed into pop culture, wouldn’t it be too easy for me?

And then I decided I didn’t care. I’d been paid. My New Year’s Resolution was to read twenty books this here and here was a book I was interested in; I had to take the opportunity before it skirted me, the same way I had been skirting It Ends With Us. I bought it one day after work, snatching it from the shelf before I had a chance to think about it too long, rushing myself through the till before I had the chance to turn around and put it back.

Besides, if I didn’t like it, there is a cute phone-box-library right by my house, and I’m sure someone, somewhere, would like it more than me.

I kept it. I’m keeping it forever, tucked nicely into the pink section of my bookshelf. Because I liked it. As I, ironically, knew that I would.

It Ends With Us is a fun book at first. A real page turner as one relationship blossoms right before the reader’s eyes and the other notable relationship come sneaking out of the shadows, piece by piece. I admit, I’m no high class literature snob (except for when I want to be), so when the blurb said something much more wordy than simply “Man A meets Man B and which one will it be at the end?” I had two main thoughts: I’m too good for this and this is going to be a great read for me. I got over myself quick when I found I was six chapters in the same day I’d started reading, and had the feeling that by that time tomorrow, the book would be finished.

I had heard a lot of different opinions on Colleen Hoover’s writing style, and I had initially been worried that I wouldn’t like it. But admittedly, the writing style is easy and quick. Not plain, exactly, but simple. Easy to follow and, as I found out, easy to get lost in. The book is fast paced with short to mid length chapters (which I certainly appreciate, I always felt like short chapters feel more like the book is moving, rather than longer ones), and with its page-turner ability, I found the book was over far sooner than I’d expected.

The story progresses as (no spoilers): Lily meets Ryle and they hit it off. It’s great, until. And also in the mix is an old friend of Lily’s she was once in love with.I know it sounds very chicklit-y. It is. But that’s honestly what made it fun for me. I’m excited for the sequel to be released and seeing what happened to the cast of characters next.

There are a few things I have noticed in my last few reads, and this one, that have pulled me from my escapism of reading and placed me squarely back in real life. I’m not sure if it’s a trope in and of itself, but I’ve noticed a prevalent “rich best friend” character appearing; funding or enabling the main characters lifestyle, existing for exuberant gifts, there for not much more of a purpose than “be rich” and “be convenient”, which is a shame. I get the feeling that it’s easy, that Rich Best Friend nullifies a lot of typical people-problems, but I find this also voids a certain aspect of relatability to the cast of characters. But honestly, that was the only flaw I saw in the book – everything else about it was compelling and emotional, intriguing and fun!