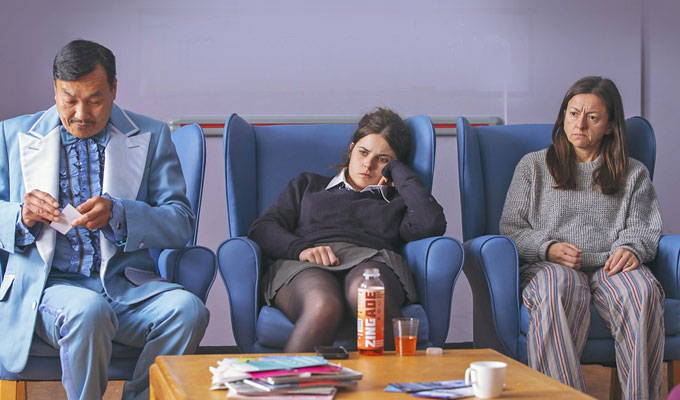 Don’t get me wrong. The first two episodes of Normal People were beautifully-crafted, and I am looking forward to watching the rest of the series. From this initial glimpse, I can see why it has received such high praise from critics and viewers alike. Whilst this show has been taking all the plaudits however, another BBC3 commission has been quietly going about its business. In My Skin may not have been given a privileged primetime slot on BBC1, but I would argue that its voice has been no less powerful than that of its highly-acclaimed stablemate. The series has just come to an end, hanging on a somewhat explosive cliffhanger that suggests a second series is already confirmed. If so, it is hugely deserved.

In My Skin has been misunderstood in some quarters as being about popularity. I don’t believe that to be the case. In the main character of Bethan (Gabrielle Creevy), I found someone not wanting fame or even attention. In my eyes, she simply wants to be liked. As a result, she spins a web of lies surrounding her family in order to paint her life as an alternate reality wherein everything is “normal” and she is “ordinary”. She tells these lies to Poppy (Zadeiah Campbell-Davies), an archetypal Miss Popular, not because she desires to be with the in-crowd. It is not status that Bethan seeks but a relationship. She fancies Poppy. Part of this coming-of-age drama is the exploration of one’s sexuality. This is done with such gentle understatement as to capture a truth very rarely seen in fictional portrayals. The heterosexist narrative that presents same-sex attraction primarily (only) in terms of the closet is instead replaced here with a delicate acknowledgement of her sexual orientation. It is neither a problem nor a revelation; a source of pride nor of shame. It just is. And there is something quite beautiful and refreshing about that.

Some people may sigh at the thought of another teen-focused drama. Yet In My Skin places a spotlight on a corner of the world still underrepresented on television. Writer Kayleigh Llewelyn has talked about ‘wanting to recreate accurately the Wales we knew’. She has praised the likes of Ruth Jones (Gavin & Stacey, Stella) for capturing the ‘warm, broad characters’ of her homeland whilst taking this further, into the realm of traditional kitchen-sink drama, presenting ‘the grittier side’ found in the nation’s working-class communities. For all that I have delighted in the TV dramas emerging from Wales over the last decade, I must concede that most of these shows have been middle-class in nature. In My Skin takes us to the coalface, as it were; to life on a typical semi-urban street on a Welsh council estate. It doesn’t shy away from the challenges of Bethan’s home life, but it is also shot through with plenty of humour. Her dad (Rhodri Meilir) is an alcoholic; her mum (Jo Hartley) bipolar. In her Nan, played wonderfully by Di Botcher, Bethan finds a warm, witty and supportive companion. Hers is a world that is very rarely seen, yet represents for many an everyday reality. This is what the BBC, when it works, does best. We take it for granted at our peril.

The relationship between Bethan and her mum is the pivot on which the series rests. Hartley is astronomical in her representation of bipolar disorder, giving a performance of such magnitude as to believe she was the real deal. It shows in the accuracy and detail of her portrayal that she has taken on board everything that Llewelyn sought to put across of her own experience. For her part, Creevy presents an inner strength to Bethan that both masks an underlying fear and grows out of a persistent love for her mother. She reflects the vulnerability of her character at the same time as drawing out a steely determination within her. In their relationship, we see the pain, joy, frustration, anger, humour, and love that bind them. It is harrowing, heart-rending, and inspiring. It is what makes the series tick. But like many of its fellow comic-noirs (Fleabag chief among them), its supporting cast are so well-rounded as to add pungency to the show’s centripetal force.

In My Skin is a complete and utter triumph. It deserves major plaudits too.