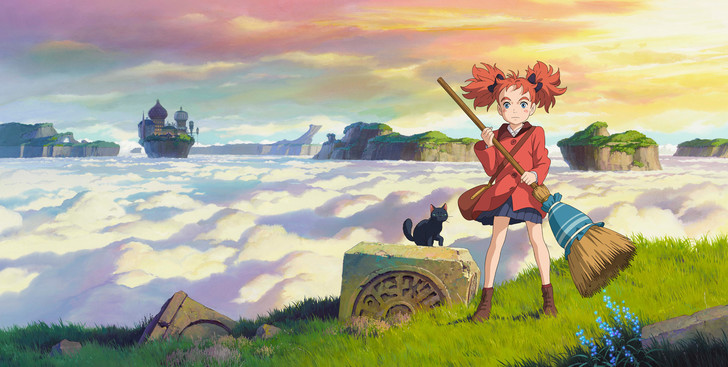 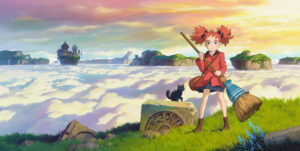 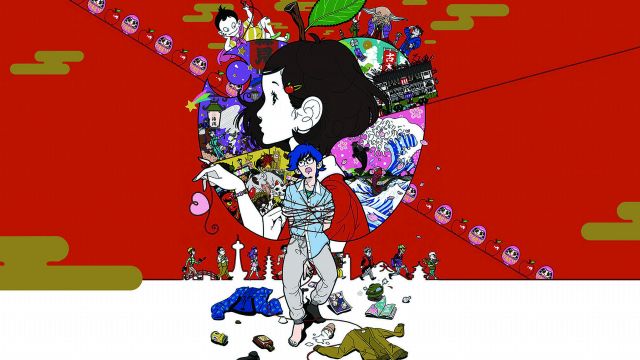 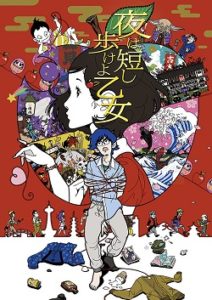 This movie is greedy in it’s concept and gratuitous with it’s execution, however I don’t mean any of those as insults. It is greedy because it excessively wants to pack so much into the movie and it is gratuitous in the way that it gives more than is necessary. It wants to  create as many images and scenarios as it can and have you feel as many emotions on the spectrum as you can.

The Night is Short, Walk On Girl opens on a marriage ceremony where two of the guest Senpai (Gen Hoshino) is smitten with a girl who he goes to college with who we will simply know as The Girl with Black Hair (Kana Hanazawa). He has strategically coordinated himself so that they constantly run into each-other so she will believe they are meant to be together. She is of age to drink and wants to earn her adulthood so she drinks at the celebration and then goes out for the night, he then peruses in an attempt to push the destiny idea.

From here on it is a case of The Girl with the Black Hair walking around in the nighttime and encountering people and their scenarios and getting involved with them. Meanwhile Senpai is in some way deterred by another story or in his efforts to aid her.

The drawing style of this movie is certainly not like typical Western animation of Disney but also not like other anime movies like Ghost in the Shell or the works of Hayao Miyazaki. The lines are thin and very little detail is used. Eyes are represented with a few lines and a coloured dot underneath. You can squint and still understand nearly everything onscreen because it is comprised of simple shapes and vivid colours.

This movie plays non-stop. When you watch it be prepared to read the subtitles fast and suck in the visual information onscreen. Luckily the image is so clear and accessible. If you have ever viewed FLCL then you will have an understanding of this movies sprinting pace.

This movie is a comedy if nothing else and has an extremely simple plot which allows the creators to put in as many different character, plot points and setups as it can. From a chase, to a drinking contest, to a few musical numbers, all are displayed with as many transitions emotions and levels or ridiculousness that it possibly can. It cooks up a wide buffet of animation and movies and allows you to be stuffed and very happy by the end.

Please click on the link below to listen to Hannah’s audio review of Fullmetal Alchemist Brotherhood. 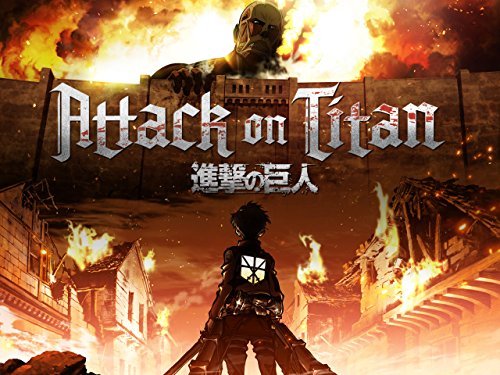 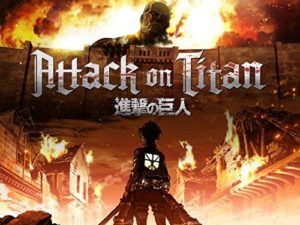 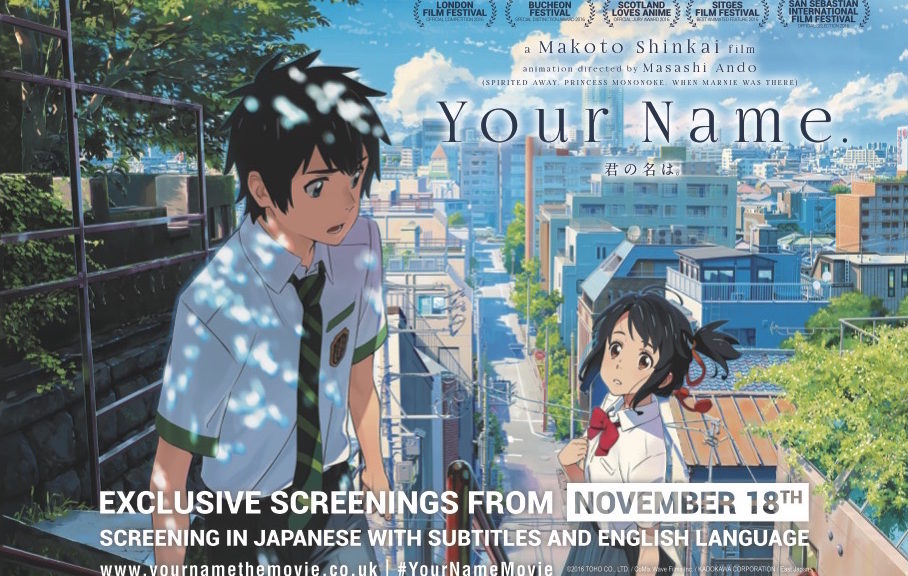 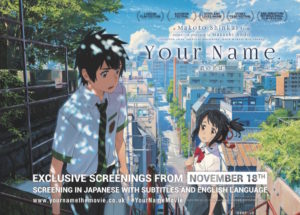 Anime doesn’t tell stories the way Disney, Dreamworks or Sony Animation tell stories. They don’t make movies solely for children or the family, they can make any movie they want, sometimes a movie that can only be a anime. Your Name is a movie, where I cant point to another for an example, it is its own thing.

A meteor shoots through the sky and while souring across, two young people at different pints in Japan see it and think the same thing “It’s like a beautiful image from a dream.” One day we see that one has woken up and everywhere they go people act strangely around her telling her that yesterday it was as if they had amnesia, they didn’t know anything about their life, later we see that this was because every other day or so it turns out they switch minds. How is this happening? Doesn’t matter, well at least the filmmakers don’t concern themselves with the how. What they do concern themselves with is the what now? But lets just put a pin in this subject for now.

The boy is named Taki (Ryunosuke Kamiki) he is a bold, forward young man that lives in the big city of Tokyo and clearly dreams of being an architect. The girl is Mitsuha (Mone Kamishiraishi) whose timid and with skills in arts and crafts. You can tell you is occupying whose body at any point in the movie because the storyboard artist took the care and time to have their body language show it easily. Each of them have their own friends and family that are all equally important to the story and fun in their own right.

So now back to the body switching thing. They catch on quickly that it’s really happening and not a dream. They communicate through their smartphones and notes. What makes the back and forth so interesting is that one is more brash and able to finally make progress with the others problems while one is more gentle so their able to gently navigate the others obstacles.

From there on there are twist and turns in the story but I wont spoil them for you. But they are very cleaver and interesting that will have you increasingly engrossed as each revelation happens. Usually a movie like this would be satisfied with the body switching thing and use that for the entirety of the movie, but there is a lot in this movie that takes you to places where you will never be able to predict.

The drawing style is like that of Studio Ghibli, thick lines blobby lines and with simple but distinguishable character designs. The facial features are more like plastic dolls but lend themselves to be easily manipulated for a vast variety of clear expressions. Beyond the characters the environments also shine as a beautiful technical achievement. The environments are lusciously, detailed painted, with all of it in-focus so wee can absorb every detail of it that someone has taken the time to draw, but also there is the added layer of the atmosphere. The lighting changes for what time of the day it is, not just bright days and dark nights, but high contrast mid-day, golden hour morning or sun sets, and depending on when it is characters and objects cast light rays. As-well as all of this there’s also dust matter that hangs in the air in a few locations. Just some incredibly generous details that the filmmakers put in to produce the best product they can.

This movie has has so much beautiful, intricate workings to it that you will be able to look at it and be owed by what is on-screen. However what will stay with you is experiencing these two character and their worlds. I cant explain why it is this movie that seems to be doing such great business when anime has been such a niche market before. Maybe it’s been knocking so hard on the door to the West so hard that this is the one to finally break through? Doesn’t matter, this is still a film with everything you want in an enjoyable watch told in the off-beat way that anime does.