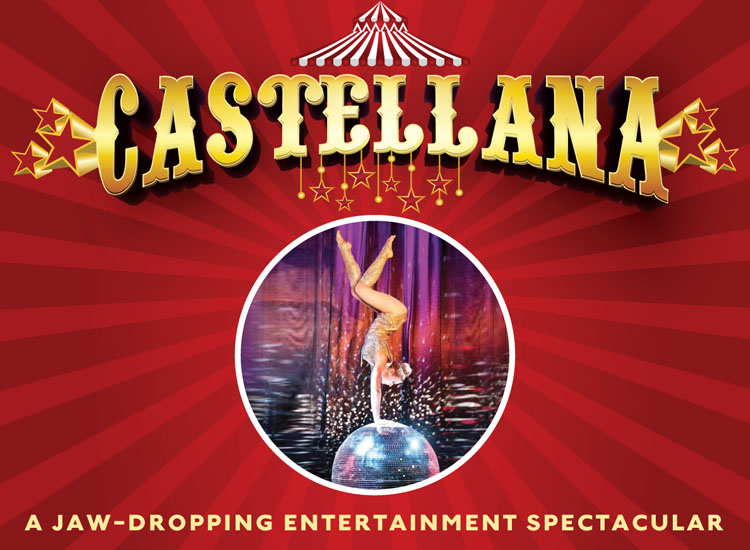 Around a year ago it was announced that Cardiff’s Winter Wonderland would be relocating to the historical Cardiff Castle (due to COVID concerns) and so I and a few friends thought that we would walk through the city center dressed as Santa and his usual companions. Apart from the excited faces of children running up to tell us they have been good this year, the actual event was extremely disappointing! The skating was frequently closed and reopened due to transmission rates and the majority of stalls were closed with those that were open were mostly selling the same thing. Therefore when it was announced that a festive festival would be landing in Cardiff Castle, I was concerned it was going to be a repeat of the lackluster event. However, I could not have been more wrong! This year the Castle has been given a festive make-over with most fantastical pop-up theatre, luminous decorations, and a plethora of stalls for everyone to enjoy.

This production marks the second show we have seen from the Castle’s Spiegeltent festival the first of which being Santa’s Wish where I talked about for me Christmas is all about the child-like wonder that floods over you as Santa bellows his iconic catchphrase. As we get older the magic of Christmas starts to fade away and we our perspectives begin to change. Sometimes Christmas is not about that warm fuzzy feeling in your belly, sometimes it is about purposefully finding your way onto Santa’s naughty list and being your own “Ho, Ho, Ho!”

This brand-new, mature cabaret event is unique in the fact that it was hosted mostly by different arrangements of three separate cast members. We were introduced to the fabulous Velma Celli (who is west-end star Ian Stroughair behind all the name-up) who is all of my cabaret dreams come to life on stage! I am absolutely in love with the sparkly outfit they wore at the beginning of the performances which acted as a disco ball by reflecting the stage lights beautifully. They also helped to drive the pace of the show with hilarious interactions with the audience (including stealing my sequin Santa hat and handing to the people next to me) and delivering exciting introductions for many of the acts. On top of all this Velma also performed an excellent rendition of the hit song “Let Me Entertain You” which introduced the host to the audience as the almost master of ceremonies.  We are also introduced to ‘the Magician’ Alex Phelps who has somewhat of a storied history with the previous host. He also helps to introduce the final host and mystery guest of the evening Ana played by Vikki Bebb after randomly selecting her from the audience and hypnotising her to be the star of the show. I do think that the inclusion of selecting her from the audience was convoluted and was very clearly an intentional plant that took away from the rest of the very live and at times highly dangerous acts to follow. I have to admit that there was an underlying storyline to the show about the re-discovery of a mythical yet fictional Castell Annwn but I missed many of the plot points as these details were shared of overwhelming audience reactions.

The first act to officially grace the stage was the fire Fox Angie Sylvia who delivered a mesmerising burlesque/fire swallowing number which ended with her setting the remnants of her outfit of fire while still on her body! The sensuality of stripping combined with the danger of fire breathing made for a totally fascinating act that had me in the edge of my seat throughout! One of the acts that had the biggest reaction of the night was Brett Rosengreen who helped to showcase male burlesque which is something I have not seen a lot of before! It can only benefit the art form if more people are aware that burlesque is for anyone and so it was fantastic to see these performers a part of the line-up! If this performance by Brett is anything to go by then I cannot wait to see more male burlesque dancers in the very near future! His cowboy-infused number was so dramatic and sensual with just a splash of humour as he poured what appeared Jack Daniels over himself and the stage which just added to the sensuality of his number. The pairing of Yann LeBlanc and Sophie Northmore (under the duo of hand-to-hand) delivered an amazing, gravity-defying balancing act where the latter would contort and maintain the most insane positions as the former supported and functioned as the much need muscle. This performance was not only elegant and beautiful but also let the audience wondered how it was all possible which is the sign of an incredible circus act. I have to say that the silk routine by the flying man Joe Kelly was one of the best aerial routines I have ever seen! The way that Joe can rapidly wrap himself into the silks to twist, flip and dangle in the most precious positions was incredible to watch and also had me on the edge of my seat throughout. There were very few pauses between positions (which is usually a concern of mine during aerial numbers) which made the entire act extremely smooth and fluid for the audience.

Overall, Castellana is one of the sexiest shows this Christmas and (although we cannot make guarantees) may be the reason you end up on Santa’s naughty list this year! It is a wonderfully vibrant yet sensual show that is clearly intended for a more mature audience (due to the nudity and sexual references throughout) but this is absolutely a show to catch on your next girls/guy’s night as there is something for everyone! I would rate this production 4.5 stars out of 5!