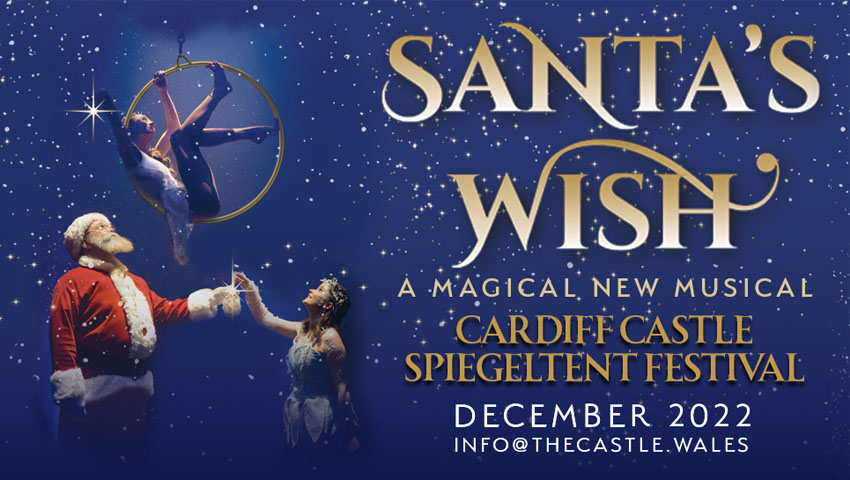 As soon as I saw details of ‘the Spiegeltent’ I was intrigued and wanted to experience it – it didn’t disappoint.  When you walk in you are transported from the freezing, noisy hustle and bustle outside into a warm, welcoming space which, although it seats 500, feels intimate and special.  I didn’t use it – but was surprised and impressed to see the generous bar area as you walk in, and that added a luxurious (and practical) touch.  I can really imagine the tent coming into its own for the current production of Castellana which is described as cabaret, circus, burlesque and comedy, with the tent’s dark, ‘smoky’ atmosphere.

Anyway back to Santa’s Wish.  I took my 9-year-old son with me to see this production but had no idea what to expect and was worried that it might be a bit young for him, but in fact I’d say it is aimed at older primary school children rather than younger ones.

The production is bright, colourful, the characters are engaging and my son was quickly taken with the humour and delivery of the male elf, as well as the tumbling and tricks.  As the story went on, it felt as though a little of the initial humour was lost as it became a more serious story, and I think for younger children, a few more breaks in the songs and story for a bit more ‘panto slapstick’ would appeal and give light relief.  The story was fairly easy to follow – though again I think some of the nuances were lost on the children, and it has the messages you’d expect from a children’s production – being kind to the planet and to one another, so you can’t argue with the sentiment.

My son judged the aerial acrobatics to be ‘amazing’ and it was certainly unusual to see a little of that in a children’s Christmas production, so that added to the spectacle.  I did wonder if perhaps a little more could have been made of this aspect of the show however, and I wasn’t keen on the very dull rather transparent costume used for the aerial work.  At one stage the performer came on to the stage wearing stilts, but nothing was really made of this skill, they just seemed to be being used to make her taller than the others which I found a bit baffling.

The entire cast are strong singers which was nice and meant that songs were pleasant and easy to listen to, and whilst this performance is done ‘in the round’ at no time did I feel that they had their backs to us or that we couldn’t see what was happening.  It was also effective that they made use of the space amongst the audience – stopping to ask little ones if ‘they had seen Santa’ etc – which delighted some little girls behind me and included the whole audience in the action.  The props for the under the sea scene were creative and effective (I may have to make an Octopus umbrella myself now!) and being able to use the aerial lift for additional special effects worked well.  There were lots of ‘Instagram’ moments and it did feel that we were seeing a Christmas spectacle, which lived up to my hopes.

On the downside, there is no interval, so the children are sitting for about an hour and a quarter in total.  The younger children in from of me really struggled with this – the little girl (about 3) fell asleep quite early on and the older boy (around 5 or 6) was complaining that it was ‘taking ages’ at about 20 minutes into the performance.  Obviously all children have different capacities to sit for long periods, and in fairness to the cast – they very much encouraged everyone to get up and dance with them in the last section of the production, although I am not sure how much of the very end of the story many people took in, because having got everyone on their feet to dance and sing along, there was still about 10 minutes of story to complete after that.  I think many parents with restless children were expecting that to be the end, so I felt for a few parents having to quieten down their children and try and get them to listen to the very end of the tale.  The other issue is something that I struggle with everywhere we go – the volume.  My own son winced at the loud music a few times and the little boy in front of me had his fingers in his ears on more than one occasion.  I am not sure why every cinema showing and production we go to these days is so loud, but at nearly 50 (so my hearing should be less sensitive these days) I found the music too loud and so it’s not surprising that younger, more sensitive ears found it too loud as well.

All in all I loved the venue and my son and I were very glad we went.  It was something a bit different in a beautiful, atmospheric venue.  The cast are all talented and the production clearly made every effort to offer something for everyone, from the delightful, sparkly ‘Snowflake’, the rough and tumble of the other elves, the humour and the circus tricks to the big man himself.  It was a magical Christmas spectacle, but just be aware that you might have to manage some restlessness for the very young.