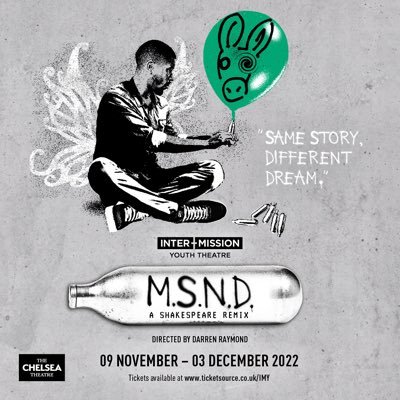 MSND is a euphoric feeling psychedelic which transports you mentally to a fantastical world of self discovery and adventure where you lose yourself to re-find yourself. Starting off with Mario, troubled at the end of youth, feeling deeply trapped by his past mentally & emotionally.

MSND – found in balloons, liquid & vaperizers, widening your eyes to skyrocket the test of temptation, bringing you closer to salvation if you succeed. We preview both Gerard and Vincent at the beginning as teenagers getting up to mischief, struggling to relieve their boredom, will drugs help them to escape or worsen their current state?…

This play exhibits the peer-pressure & over-rated influence of drugs experienced by young people whilst remodelling the beauty & power of Shakespeare’s language. This production is ready to be experienced for just over 4 weeks until 3 December. If you haven’t been to an IYT production yet, I urge you to experience it – most definitely a must see!