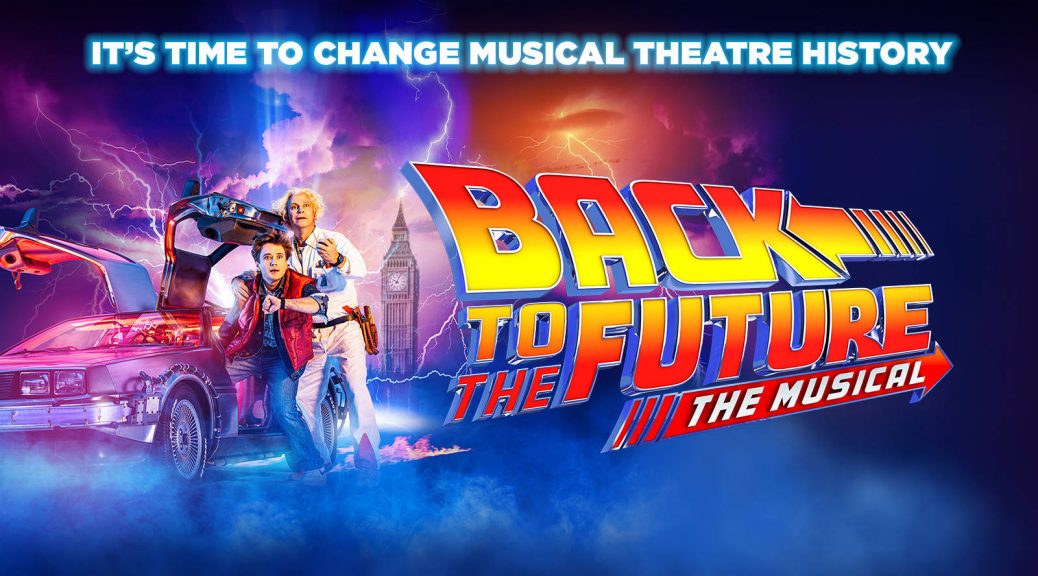 This was a musical we’d planned to see earlier this year, but the weather won and trains, buses and all manner of transport down the M4 stopped, so we waited, and on a bright Autumn day in London, we finally came to see the brilliance that is Back To The Future The Musical (herein known as BTTFM).

Prior to it’s West End debut, BTTFM was workshopped in Manchester and had a very short run before the world locked down and the pandemic closed theatres all around the UK and beyond. I’d heard about it then and wasn’t 100% on whether a musical on a film such as this would work. I’ve previously seen Titanic the musical, as well as Sister Act and Ghost, so know there’s two side to every film/musical cross over.

I don’t feel I need to explain the plot, but I’ll give it a go;

When Marty McFly finds himself transported back to 1955 in a time machine built by the eccentric scientist Doc Brown, he accidentally changes the course of history. Now he’s in a race against time to fix the present, escape the past and send himself… back to the future.

Add into the mix an incredible 80’s soundtrack and you have a musical, that when it hits 88, you’ll see some serious sh…. You know what.

New songs written by Glenn Ballard based on the script by Bob Gale and Robert Zemekis, this could feel like it’s trying too hard to be BTTF – but it doesn’t and I think that in itself is down to the cast of Ben Joyce (Marty Mcfly) and Roger Bart (Doc Brown), Oliver Nicholas (George Mcfly), Amber Davies (Lorraine Baines), Jordan Benjamin (Goldie Wilson / Marvin Berry), Sophie Naglik (Jennifer Parker) and Harry Jobson (Biff Tannen).

Roger Bart is musical theatre royalty, and in this performance you can see why. The ensemble pieces are amazing, as are the solos – although the songs aren’t quite as memorable as I’d like – I know as soon as I start listening to the cast recording in the car, it’ll all come flooding back to me.

I loved it, can’t say I didn’t, even contemplated doing a rush ticket for the next day’s performance. My only issue with BTTFM is that it relies too much on a that 80’s nostalgia. You find yourself completely immersed in something so familiar that it feels right. Maybe that’s just something I felt, and you won’t feel the same way, needless to say there is a moment when I felt myself get a bit emosh – not saying where, needless to say, Alan Silvestri’s composition is as part of the 80s as anything you’ll hear from John Williams.

The only thing that sets this production apart from anything else in the West End, is that Delorean!

What a machine! In terms of being in the moment, it’s up there with Elphaba’s Defying Gravity moment, Mary Poppins flying, and Cinderella’s rotating auditorium (what, do we not talk about Cinderella now?). It’s an incredible prop – and I realise calling it a prop does it a huge disservice, as it’s so much more than that! The car is literally the star!

Musicals are about escapism, fun, and feeling good, and BTTFM does this in bucketloads.

Your review is whatever you make it. So, make it a good one!